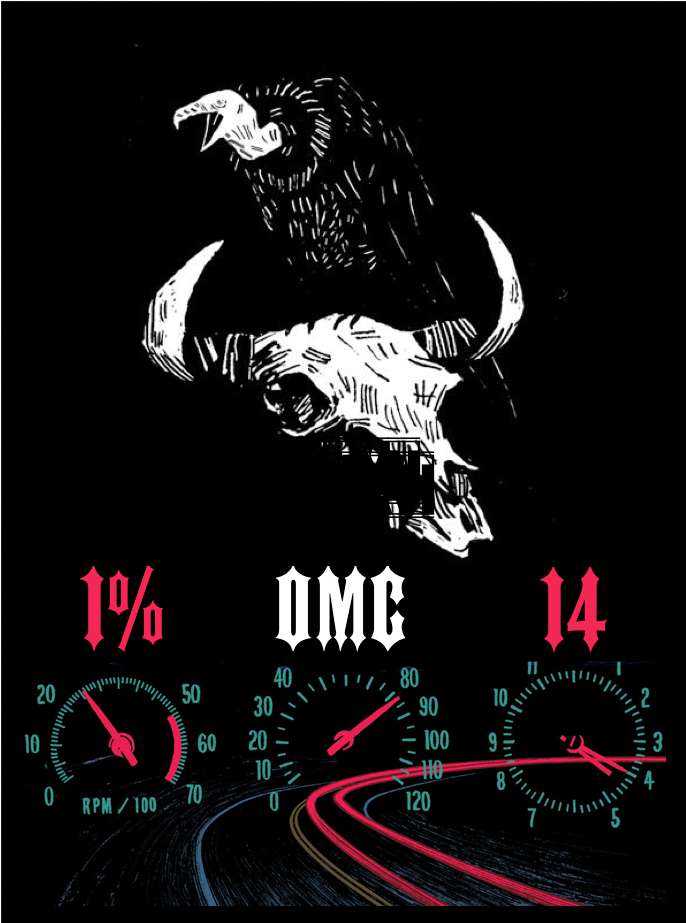 “If you’ve ever embarked on the neon-lit odyssey through the biker bars of Dixie, you know it’s a strange, atavistic, and tribal world to visit. Individually, its members are usually hapless, bumbling creatures who were born out of luck, and whose largest successes usually consist of staying out of jail, paying back their bondsmen, and keeping their appointments with their probation officers and welfare workers. It’s probably not a coincidence that most of them are ugly and stupid. But collectively, they are both frightening and fascinating, especially to those who wonder what they would be like if they traded their routine and predictable lives for a real fling out on the ragged edge. Fortunately, most contemplatives recognize and reject their fleeting moment of madness. The few that don’t quickly find that life on that ragged edge is banal, bloody, and short.”

For those insane enough to ask after the White Reich’s favorite watering-hole, responses generally direct them to “go straight to Hell, then take a hard left until you hit the intersection of I-14, county-road 88, and the F-U railway .” In truth, the biker bar named Cryin’ Bluebellies is located a stone’s throw inside Slidell’s municipality and less than a mile off Interstate 10.

Cryin’ Bluebellies sits on a yellow-dirt road that winds through thick stands of dead cypress and copper-colored pools of stagnant water. Its shale parking lot is covered with scores of chopped-down Harleys whose chrome and lacquered-black surfaces seem to glow with a nocturnal iridescence. The bar’s sole ‘sign’ is a pair of bullet-shot effigies dressed like Union solders and lynched from a nearby telephone pole. Otherwise, Cryin’ Bluebellies greets its visitors with the cacophony of leather jack-boots stomping down on start peddles; the ear-splitting roar of straight exhaust pipes; the tinkle of a beer bottles thrown against nearby trees; and a man urinating loudly on the shale in front of a pick-up truck’s headlights, his muscular, blue-jean-clad legs spread with the visceral self-satisfaction of a gladiator.

The bar itself is hammered together from plywood, tarpaper, and corrugated tin sheets. Its screens are rusty and gutted; its windows pocked from gravel flung against the building by spinning tires. Its porch sags under the weight of a long-derelict ice-machine. The ramshackle structure sits upon cinderblocks like an elephant with a broken back. Behind the building and its parked big-rigs, bikers barbeque in oil drums under litter-strewn oak trees and the miasma of dust and smoke, while patrons lazily chuck crushed beer cans out the back-porch and watch hobos squabble over the few drops of booze or the even more meager deposit fees.

Inside, multiple jukeboxes perform a deafening battle of the bands, pumping out jarring juxtapositions of honky-tonk, thrash metal, and cowpunk. Bikers and their strung-out, borderline floozies cluster around pool tables, the former rifling balls into the side-pockets as if they want to drive pain into the wood and leather. A huge Confederate flag billows out from the tacks holding it to the ceiling, while mounted buck, duck, and gator heads serve as crude-hanging racks for stained panties and bras. A metal sign, the size of a bumper sticker, hangs over the door to the men’s room, proclaiming “White Power.” Above it is a duct-taped, misspelled message scrawled on cardboard: “Dis the only shit-hole we gat, so keep the god-damned place cleen.”

The bar’s patronage features atavistic men in sleeveless, three-patch jackets; boots sheathed with metal plates; black-leather cut-outs that expose the genitals like flaps on a gunfighter’s chaps; hairy bodies strung with chains, studs, and iron crosses; tattoos with swastikas, twin lightning bolts, and snakes with human skulls inserted between their fangs; and an odor of chewing tobacco, snuff, cigarette smoke rubbed like wet nicotine on clothes, grease and motor oil, reefer, and a noisome veneer of testosterone and dried semen.

• Davis Jefferson Boggs (•••) (g. 1999) Prez of the White Reich, Davis Jefferson looks like an Aryan poster boy with his blond hair, blue eyes, high cheekbones, and lack of any visible deformities. Beyond being Bobbi Jo’s primary ghoul, the ninteen-year-old biker is as mad inside as he was once handsome outside, though, being diagnosed with every disorder from ADHD to ASPD until he dropped out of middle school after sexually assaulting one of his teachers. He subsequently stabbed his father to death in the shower and took his mother (who he called his “pet whore”) as his wife. He periodically sent her out to sexually service truck drivers as “punishment” for her misdeeds (imagined and otherwise), then gutted her customers in fits of possessive rage. Recently, Cletus ripped off Davis’ genitals during the Soiree Night Slaughter. He was subsequently injured and scarred by his own bikers during the massacre, and later mind-raped to believe his mother, rather than clan patriarch, is to blame for his emasculation.

• Lester-Lee “Punch” Boggs (•) Prospect and primary bartender of the Cryin’ Bluebellies, Randy is a small, prematurely balding, sunburned man with thin arms. His ‘service uniform’ is a shirtless, wash-frayed suit-vest and pink-spandex cycling shorts. His right and left shoulders are respectively tattooed with an eagle-clutched swastika and the globe and anchor insignia of the Marine Corps. His neck is inked with red letters, proclaiming, “Nobody gets outta here alive.” When not selling bottles, shots, or four-dollar buckets of beer, he picks cheap tobacco from his teeth, complains about his ulcers and slipped disk, shows off his Aryan Brotherhood trading cards, or exchanges jailhouse horror stories (his favorite includes a four-hundred pound black trusty nicknamed the Midnight Special who kicks the bucket after an AB member chucks a Molotov cocktail between the bars of the trusty’s cell).

“I’d never been able to right figure the women who hang around outlaw bikers, because with some regularity, they’re gang-raped, chain-whipped, and get their hands nailed to trees, but they always came back for more –obedient, anesthetized, and bored, like spectators at their own dismemberment. I swear, God gave more sense to toads.”

• Randy-Brandy Boggs (•) De facto head barmaid of Cryin’ Bluebellies due to her relatively unique talents of being literate and knowing her times table. Her typical outfits give the impression that she dresses for work in a dime-store. In the dark. Tonight’s ensemble might include a pink crop-top that says ‘Biloxi or Bust’ with the first two words crossed out, unbuttoned black vinyl shorts two-sizes too small, owl glasses with red plastic frames, velour and rhinestone festooned heels, and earrings made from shotgun shell casings. Her Aryan-blonde hair is shaved on one side to proudly display a scar from a burning-hot exhaust-pipe that marks her the property of the OMC like a biker cattle-brand. She wears press-on nails, painted all-black or in the colors of Confederate flag.

• Charlene “Harley-Charley” Boggs (0) Charley is a biker-chick whose history with the Reich dates back to its inception (though she remembers less than third of it even on her most sober nights). These nights (which are definitely not her most sober), she hangs around Cryin’ Bluebellies, serving as an easy lay for whoever gives her something to smoke, shoot, or make a dint in her bar-tab. Her hair is a chemical-burnt platinum, with dark roots peeking from her scalp. Her left arm has a sleeve-tattoo of burning roses encircling numbers and passages ranging from the scriptural (John 3:16) to the scatological (69). She favors sleeveless T-shirts (her favorite is a faded yellow thing with an ironed-on pattern of a half-peeled banana), no bras, and Clorox-faded denims that hang as low as bikinis on her hips. Hard-drugs and harder living has made her voice a phlegmatic husk, like dialogue in a slow-motion film.