“…back then it was just Gwen and me, and well, we thought the name was fitting. Because that’s what we are, loose women who take things from people.”
Jocelyn Baker 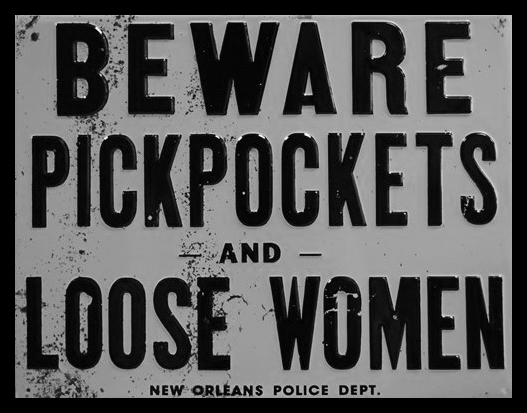 Just about every Kindred in the Big Easy is aware that most of the local Kindred krewes (coteries composed of neonates) consider themselves at least passingly loyal to Prince Vidal, in name, if not in truth. After all, flouting the rule of the local ruler—especially when that ruler has the iron-fisted reputation Vidal has—is an unwise thing for a neonate to do, unless that neonate has already ingrained themselves into the good graces of a rival powerful enough to give them some sense of security. But even then, most neonates realize that, should the support of their adopted liege run dry, they will be left all alone in a city run by an unforgiving elder whose displeasure they have roused.

Most Kindred are equally aware that one krewe in particular, a tight-knit group known as the Storyville Krewe, is especially and actively loyal to Vidal, and that its members consider themselves firmly entrenched in the Prince’s camp. Unlike most krewes, which typically consist of either Anarchs or neonates from multiple covenants, the Storyvilles restrict their membership exclusively to Sanctified Kindred. As a consequence, the krewe is loyal to Prince Vidal to an extent that few other coteries can claim to be.

The Storyvilles frequently take to the streets of Central City and the Ninth Ward to hunt and terrify mortal Vodouisants in accordance with the will of the Lancea et Sanctum (at least as they interpret it). Originally a small and tightly-knit group of Toreador, the krewe has expanded to its present size only in the past several years, along the way picking up rivals such as the (now-defunct) Eight-Nine-Six krewe.

In 2015, Evan Bourelle disappeared without a word to his krewemates. The other Storyvilles grew distraught and short-tempered with one another as the Toreador’s absence aggravated tensions among the group and drove them to increasingly reckless actions. In early 2016, Gwendolyn Wade was executed by Prince Vidal for illegally Embracing a thin-blooded childe. Roxanne and Wyatt, who’d come to believe from Caroline Malveaux-Devillers that Caitlin Meadows was responsible for Bourelle’s disappearance, subsequently launched an ill-considered attack upon the rogue scourge. Both neonates met their final deaths, leaving Jocelyn Baker the sole surviving member of the now-defunct coterie. Jocelyn herself was destroyed shortly later on March 23 as part of an unrelated conflict between Caroline and Sheriff Donovan, putting a final end to the Storyvilles.

Lineage: 12th gen. childe of unknown sire
Embrace: 2011
Final Death: 2016 (5 years undead)
Status: Camarilla 0, Hardline Sanctified •, Toreador 0
Coterie: Storyville Krewe •••
Near-founding member of the Storyville Krewe (joining just after Jocelyn and Gwendolyn), it was Evan who brought Roxanne into the coterie and led to the formalization of their structure. In a relationship with the Ventrue, he was the tempering voice to her commanding one in the group until his recent disappearance without a trace, leaving the group as a whole distraught and slightly dysfunctional in his absence. Described by Jocelyn as a “boy next door” and “nice, but not really a pushover ‘oh I understand if you pick the jock’ type.”

Lineage: 12th gen. childe of John Polk
Embrace: 2010
Final Death: 2016 (6 years undead)
Status: Camarilla 0, Hardline Sanctified •, Ventrue 0
Coterie: Storyville Krewe •••
Despite her haughty attitude and being born to privilege as a wealthy state congressman’s daughter, Roxanne’s weak blood—the furthest from Caine out of any Ventrue in the city—means she has little hope for advancement within the clan. She has made more of a name for herself among the Lancea et Sanctum and is the acknowledged leader of the Storyville Krewe despite being a latecomer to the group. Lovers with Evan Bourelle and deeply disturbed by his disappearance and presumed abduction by unknown groups. Has led an aggressive effort to find him, and originally suspected Eight-Nine-Six of responsibility. Stiff and formal by the standards of most of the krewe, likely arising from her well-to-do background and formal Embrace. Haughty and raven-haired beauty with razor-sharp eyes.

Lineage: 13th gen. childe of unknown sire
Embrace: 2013
Final Death: 2016 (3 years undead)
Status: Camarilla 0, Hardline Sanctified •, Toreador 0
Coterie: Storyville Krewe ••
Conservative Christian daughter of a Quiverfull family raised among that denomination, Gwen was Embraced by an unknown sire in Houston and only later traveled to New Orleans. Initially despondent over her inability to have children, she’s since fiercely embraced the Lancea et Sanctum’s dogma alongside the others of the group. A founding member, she and Jocelyn allegedly were inspired as to the name for the krewe by a photo of an old street sign from the Storyville red light district of the early 20th century regarding pickpockets and loose women. Gwen is also a painter. Physically she is somewhat pudgy and sad-faced, with dark hair and a large bust.

Lineage: 11th gen. childe of Sally Ward
Embrace: 2012
Final Death: 2016 (4 years undead)
Status: Camarilla 0, Hardline Sanctified •, Toreador 0
Coterie: Storyville Krewe ••
Toreador digital photographer from an upper-middle class background and founding member of the Storyville Krewe alongside Gwendolyn, Jocelyn was Embraced by her sire (Sally Ward) for both her “spiritual temperament” and skill as an artist. Intensely devout, Jocelyn makes a habit of visiting St. Patrick’s Cathedral to pray despite the physical discomfort it brings her. Believes strongly in the rule of Prince Vidal, and holds that in the absence of Savoy the Prince would have scoured the city of Baron Cimitiere and other undesirable elements. Released only in the past few years, she’s struggled to gain recognition as an artist because of her medium in New Orleans’ deeply conservative Toreador circles. Brunette with gentle features and a slight frame.