“And thanks to Daniel’s preaching, many of the Damned were Sanctified in Thebes, foremost among them Penelope and Valentinus, Michael and Hostilinus the Numidian.”
The Testament of Longinus

The Numidians were an all-black coterie of Bourbon Sanctified. Apart from their loyalty to Antoine Savoy, the krewe was known for their involvement in Carnival’s artistry, music, theatrics, and general joie de vivre, as well as the more mundane protection of parade floats and costumes during their off-season storage in Algiers.

The Numidians’ name referenced not only their activity in Algiers (i.e., a region named after the African counterpart that was the heart of the ancient Numidian Kingdom), but also Thascius Hostilinus the Numidian, a prominent Sanctified converted by St. Daniel of the Theban Legion, referenced in Lancea scripture (i.e., II Sang 5:6 and Testimony of the Plague Angel), and revered for defending the Chapel and Spear against Rome’s pagan Kindred.


Lineage: 9th gen. childe of Valentine St. James
Embrace: 1856
Status: Bourbon Sanctified ••, Camarilla ••, Circle of the Crone •, Toreador •••
Coterie: Numidians •••
The modern-day Numidians were not-so secretly sponsored by the octaroon ancilla, Lisette Toussaint, a fashionista known for designing ball gowns and masks, particularly for Mardi Gras. When Katrina threatened New Orleans, Lisette fled with many of the city’s Kindred to Houston, where she has allegedly remained since 2005.

Lineage: 9th gen. childe of Morgaine
Embrace: 1949
Final Death: 2005 (56 years undead)
Status: Bourbon Sanctified ••, Camarilla •, Toreador ••
Coterie: Numidians •••
The krewe’s spiritual as well as social leader, Remy was ordained as a Sanctified priest by then-Bishop Clarice Barabet, and known for his syncretism of Catholicism and Vodoun. During Katrina, Remy stayed behind with Clarice and most of his krewe, and like his Malkavian bishop and krewe-mate, he perished during the hurricane.


Lineage: 12th gen. childe of Angelle “Ange” Poncelet
Embrace: 1929
Status: Bourbon Sanctified •, Camarilla 0, Toreador ••
Coterie: Numidians ••
The Numidians’ eldest member was a talented jazz saxophonist. He and his sire had sordid histories with the local Setites, which prompted Louis to relocate himself and his sire to the ‘Little Easy’ of Mobile, Alabama after Katrina. Both allegedly remain there to this date–though Louis retains several connections to the Big Easy, including his ex-krewe member, Julius, and his childe, Arthur Duchamps, who recently moved to New Orleans.

Lineage: 11th gen. childe of Martin Neal
Embrace: 1953
Final Death: 2005 (52 years undead)
Status: Bourbon Sanctified •, Camarilla 0, Malkavian •
Coterie: Numidians ••
Hailing from an abusive mortal background, Julia suffered from multiple personalities was mentally fragile even for a Malkavian. During Katrina, she refused to evacuate, but rather remained behind with most of her krewe–a choice that led to her final death (and her paramour’s sorrow). 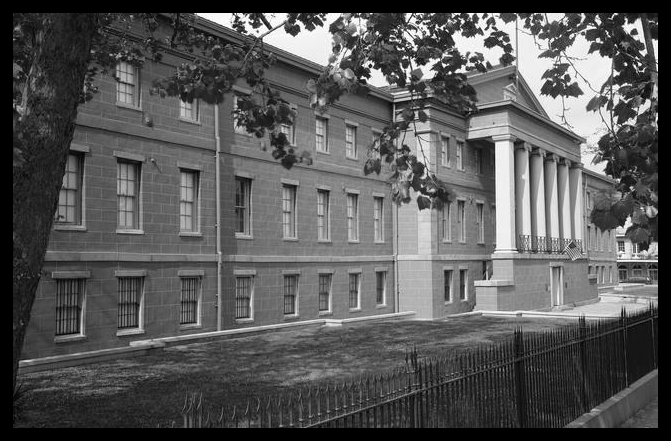 Before their dissolution, the Numidians had two primary havens. One of these was in Algiers, though its exact location was known solely by its members and sponsor.

Their second haven, however, was a well-known gift from the lord of the French Quarter: Monnaie de La Nouvelle-Orléans. Situated at 400 Esplanade Avenue, the former New Orleans Mint building sits at the Mississippi’s edge and the contested border between Savoy’s and the Baron’s domains. After the mint closed in 1911 and then cycled between being a U.S. Treasury assay office, federal prison, Coast Guard storage facility, and Cold War fallout shelter, the historic building was slated for demolition in the late 20th century. However, it was spared this fate, allegedly due to the Numidians who helped raise enough loyer noir as part of their corvée, allowing it to be converted into a museum.

Initially, the museum focused on the old mint’s coin production history. Over time, though, the krewe’s influence helped to expand the museum. These added exhibitions included those devoted to Mardi Gras (much to Lisette’s pleasure), jazz music (with Louis and Julius ‘persuading’ the N.O. Jazz Club to donate a large collection of pieces and research materials featured previously in the New Orleans Jazz Museum), and Newcomb Pottery (courtesy of Julia). Later, the third floor became home to an archive of maps and documents, including French and Spanish colonial records.

Despite–or perhaps because of–these impressive efforts, John Harley Matheson (who had held domain over the U.S. Mint before his exile) and his Invictus allies persuaded Vidal to declare the renovated Monnaie de La Nouvelle-Orléans an Elysium, and thus deprived both Savoy and the Numidians of their stronghold–or at least its privacy. To add insult to injury, Marguerite Defallier’s political pawns in the state capital simultaneously passed legislation making the old Mint a minor branch of the Louisiana State Museum, alongside the the Cabildo, the 1850 House, Madame John’s Legacy, and the Presbytere (where the Mint’s entire Mardi Gras exhibit was subsequently moved to).

The death knell of Numidians and their haven, however, came from Katrina. Apart from destroying half of the krewe, the hurricane severely damaged the museum’s roof, allowing water to enter the building and damage a significant portion of the New Orleans Jazz collection, which prompted further relocation of its pieces to Louisiana State University, the University of Louisiana at Lafayette, and the Louisiana State Archives.