The Krewe of Janus

“They were here, Caroline. In this apartment. The body was a threat to their beloved Masquerade, so they disposed of it. They left these as a warning that if you continue to be a threat to the Masquerade, that they will so dispose of you.”
“They treat it like baseball. Three strikes and you’re out. Except it’s forever. No more innings. First offense, like that other, uncolored ice cube, is allowed to slide. The cube melts, leaves a little water, but no harm, no stain left. Second offense, and they go after someone or something you love. And it may be subtle, but it isn’t pretty. Third, and the ump throws you out of the game.”
“Altogether, the Krewe of Janus aren’t that bad. In fact, you might even call them selfless or even fair, if it weren’t for the fact that their vitae poisons everything they are and do.”
Louis Fontaine to Caroline Malveaux-Devillers 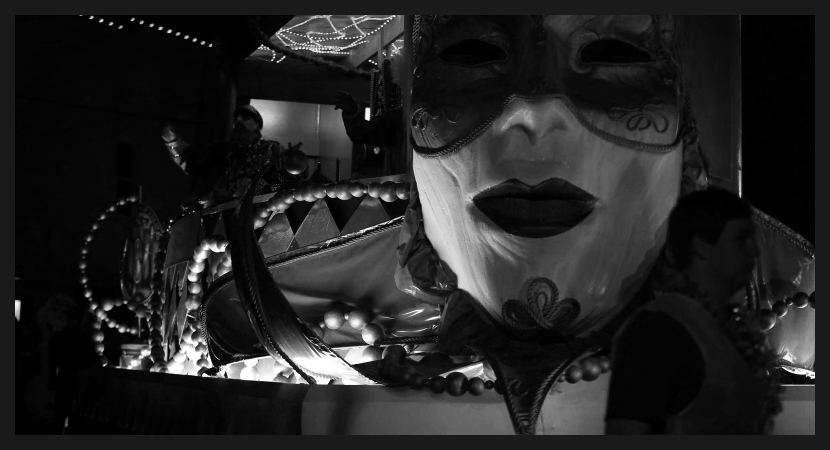 The Krewe of Janus was founded in the early 1900s by Harlequin through his connections to the mortal Mardi Gras krewes. The Malkavian originally intended the Krewe to be a vampiric continuation of his mortal social life, but the coterie’s purpose soon evolved in response to the escalating factional struggle between Vidal and his two rivals. All three Kindred leaders attempted to enforce the Traditions within their respective territories, but they refused to work together and coordinate efforts on a truly city-wide scale. Furthermore, New Orleans was a grossly overpopulated city by Kindred standards, meaning that violations of the Masquerade were already more prevalent than in cities with comparable mortal populations. Nightly maintenance of the First Tradition had long occupied much of then-Sheriff Bastien’s duties, and the heightened conflict between the three elders strained his ability to keep up.

Harlequin initially stepped forward to keep things from getting out of hand during his beloved Mardi Gras, and policing this holiday is still the Krewe’s best-known activity. As time went on, however, the Malkavian’s fascination with masks led him to branch out into other festivals. New Orleans celebrates far more holidays than Carnival and the Krewe involves itself with them all.

Harlequin acts as the Krewe’s spokesman and leader. He is the only Kindred who is widely known to be a member of the coterie. Most of the city’s older Kindred can name at least several other members. It is unknown how the Krewe organizes itself internally or how many total members it has.

The Krewe also keeps at least a dozen “enforcement ghouls” for muscle and keeping a lid on Kindred affairs during the day. These ghouls (all of whom have backgrounds in military or law enforcement) are among the best-trained and loyal in the city, and give the Krewe a real edge against other Kindred.

Th Krewe keeps further ghouls and agents in other “Masquerade-sensitive” locations throughout the city, such as hospitals and Storyville (the local nickname for the city’s Rack). The NOPD is the domain of the sheriff.

• Mardi Gras: The only time the Krewe acts openly is during Mardi Gras. They greet the massive influx of Kindred into the city, warning the newer and younger ones to keep their feeding discrete for the good of the Masquerade. Any threats are dealt with swiftly, and the Krewe makes it clear who was behind the retribution. Even so, all the Krewe wear masks when policing the Masquerade. This is partly done to protect the members’ identities, but also out of simple respect for tradition (members of the city’s oldest mortal krewes keep their identities strictly secret as well).

• Off-Season: The rest of the year, the Krewe works quietly and secretly. Through Obfuscated spies, media monitoring and simple detective work, they watch for threats to the Masquerade. Few things escape their notice. Once they spot a threat, they rarely fail to find its perpetrator. Initially, they will leave mysterious warnings for the vampire to cease their activities, such as notes in their havens, “hauntings” created with Obfuscate, or messages delivered by Dominated mortal allies of the target. If the vampire does not heed these warnings, the Krewe quietly eliminates them. Few fail to listen.

As few Kindred fail to remember, Harlequin is the Regent of the Masquerade. The Malkavian’s “parish” consists of any site with an ongoing Masquerade breach, and by Vidal’s decree, the Krewe has dispensation to operate within the domain of any vampire for purposes of upholding the Masquerade. Indeed, Kindred who interfere with the Krewe’s duties are considered guilty of trespassing, even within their own domains, and can be punished accordingly by Harlequin.

In practice, Harlequin recognizes the need for good politics. He typically makes an effort to keep regents in the loop about the Krewe’s activities and (when possible) coordinate Masquerade clean-ups alongside a regent’s own people. Most regents appreciate the Krewe’s efforts to uphold the First Tradition and accept its members’ presence in their parishes as cost of doing business if that means a Masquerade breach goes away.

Harlequin cares less about playing nice with unimportant Kindred, though—especially ones whose perceived inattention or poor judgment led to a Masquerade breach in the first place. The Krewe rarely gives notice when they turn a neonate’s domain upside down to repair a breach. The Krewe often stakes or Dominates troublesome neonates who stumble upon their activities in order to keep such licks out of the way. The Krewe also ransacks havens and pries into affairs unrelated to a neonate’s immediate Masquerade breach under pretext of investigating further breaches. (After all, Harlequin holds, if they broke the Masquerade once they might have broken it somewhere else.) Harlequin cares little for the ill will this engenders and seems to enjoy stomping over the toes of licks who do not treat the Masquerade the same reverence he does.

• Elders: The city’s elders are fond of the Krewe, because it handles the night-to-night maintenance of the Masquerade and leaves them to spend their time on other pursuits. Most elders, it’s also presumed, would like to place the Krewe under their thumb, but none have made any serious known effort to do so. Harlequin is keen avoid any undue entanglements with a single elder, most of whose peers would take umbrage at a single elder coming to dominate the Krewe.

• Augusto Vidal: Prince Vidal is a notable exception to the elders’ fond attitudes and remains lukewarm to the Krewe’s efforts even a century after its inception. He would prefer the coterie to exist under his direct control, and were it not for their activities in Antoine Savoy’s and the Baron’s territories, it’s probable that the prince would have placed them under his sheriff’s supervision (or else forcefully disbanded the coterie). As it stands, the prince grudgingly finds it preferable to let a neutral third party help enforce the Masquerade in the French Quarter than to let Savoy do so by himself.

• Antoine Savoy: The Toreador, for his own part, is all-too aware of his rival’s tepid feelings regarding the Krewe and has made Harlequin many lucrative offers to further tie the coterie to the Bourbon Sanctified. The Malkavian has gracefully declined each such overture to date. The Krewe’s sole aim, he repeats, is to uphold the Mask.


Lineage: 9th gen. childe of Clarice Barabet
Embrace: 1910
Status: Bourbon Sanctified •••, Camarilla •••, Hardline Sanctified •••, Malkavian ••••
Coteries: Harpies •••, Krewe of Janus ••••
No one knows Harlequin’s real name or face. Every night is Mardi Gras to this Malkavian, who is never seen wearing anything besides a face-concealing domino mask and changing rotation of ostentatious costumes. Harlequin is famous for leading the Krewe of Janus, a bogeyman-like coterie of anonymous Kindred that maintains the Masquerade (“that greatest of all masks”) by stalking, harassing, and eventually slaying violators. The Krewe is Big Brother to the city’s neonates and seems to have eyes everywhere, always watching for indiscretions. Elders are fond of the Krewe, which has secured Harlequin a place among the city’s harpies. Harlequin himself was a member of the Mistick Krewe of Comus in his mortal life and loves few things more than a good party—and no party more than Mardi Gras.

The Krewe of Janus