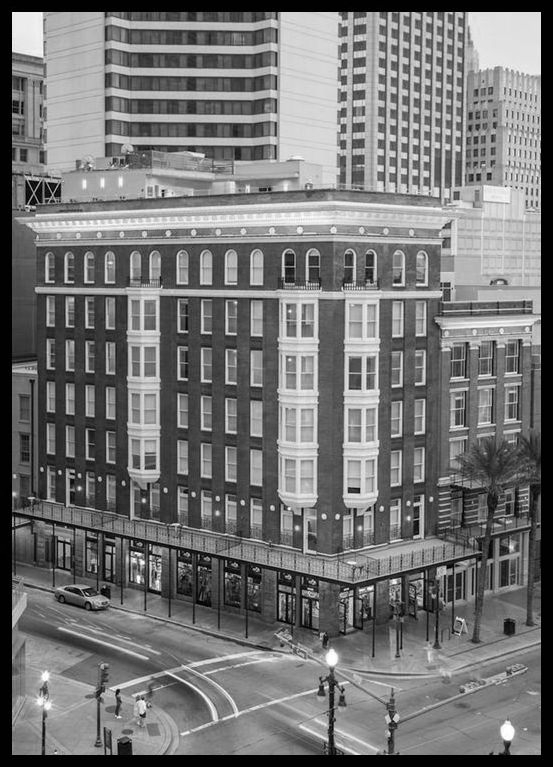 Originally designed by New Orleans native architects Thomas Sully and Theodore Toledano, and built in 1889, the Giani Building was a staple of the Central Business Distinct for many years, the first high rise built along Canal St and a major center of business. Eventually, as the building (or rather buildings, for originally it was three separate structures) aged they fell out of use, and by the time Hurricane Katrina hit the city in 2005 it was largely abandoned, deemed too expensive and impractical with its ancient design, wiring, and other impediments. While the hurricane did no favors with the exodus it prompted from the Crescent City, the subsequent renewal brought about by the rebuilding of New Orleans eventually gave birth to plans—and funding—needed to renovate the Giani Building into something new: a combination first floor retail development and high class apartment building downtown, within walking distance to the French Quarter (a meager block away) and with amenities such as an upper deck lounge, pool, and deck. Renovation began in 2014 and finished in mid-2015.

Today, the Giani Building is as much a symbol of the New Orleans that was as the New Orleans that is: a renewal of the past and a step into the future. The building boasts more than forty apartments across six floors (the first floor is exclusively retail, management, and the lobby) and caters to wealthy up-and-coming professionals that lack families (most of the units are one bedrooms) and enjoy the proximity to many of the signs and sounds of the city’s major attractions. Much of the interior was gutted during the renovation, with new wiring, piping, and ventilation installed throughout as part of a massive (and expensive) project in part funded by ‘historical preservation’ funds designed to preserve the look and feel of the city as a whole.

Sharing a street corner with three major hotels, the Giani Building, once a ‘high rise’ and beacon of development, is today dwarfed by its neighbors. Despite that, it brings something that its towering peers cannot match: history and authenticity, complete with its old second story wrap around balcony for festival times.

For several years the building was managed by Canal Camp Apartments LLC, with Ernest Phimlee, a fat and overly serious man in his early thirties (and an honest to goodness descendant of Thomas Sully) serving as both the overall face of the operation and with broad oversight of the building (along with several others) and Hugo Cleveland, a portly middle-aged man who serving as the day manager. Cleveland lived on-site and was eager to accommodate residents, maintaining that he was available ‘day or night’ as they required. Unfortunately for both Phimlee and Cleveland, ownership changed hands in 2016.

In 2016, as her fortunes waxed (and the threat to the building presented by the increased Bourbon influence in its vicinity increased) Ms. Malveaux-Devillers arranged the purchase the building quite directly from Rishu “Rich” Pavaghi, better known as “the t-shirt czar.” In truth, as much as she needed firmer control over the building for the sake of its growing role as a bastion, the heiress needed it because of the changes she had in mind for it.

Among the first of those changes was the firing of both Phimlee and Cleveland, the creation of a new management company, and a series of policy changes that served to force out many residents in the year that followed, including a firm ‘no pets’ policy. Today, Kathleen “Kitty” Palmer, a pleasant and attractive middle aged woman serves as the day-to-day manager of building. Ms. Palmer has a motherly air about her and is typically eager to please residents. She’s aided by Jessica Kontkowski, a flirtatious blonde college student who works irregular hours. In the tradition of previous management, they live on site, and at least one is likely to respond at all hours of the night.

Beyond the leasing and services office personnel, the building employs a robust security office that typically has no less than two personnel (and a guard dog) on duty to monitor the building’s surveillance systems and respond to any disturbances. While early on some residents felt the extensive security was unnecessary, a shooting in the building in 2016 in which security narrowly prevented the death of a resident, to say nothing of the uptick of violence in the area over the last few years, has silenced most of those complaints.

Outside of Perdido House, the Evergreen Plantation, and the Tremere chantry, the Giani Building may be the most densely Kindred-populated building in New Orleans. It is the full-time home to no less than four neonates, and plays host irregularly to as many as four others as part of its role as the Hardline Sanctified’s bastion against Antoine Savoy’s growing hold over the southern end of the Central Business District. In fact, the majority of the residents of the building in the modern era are other Kindred, ghouls, or those in unknowing service to them.

Kindred residency began in 2015 when Caroline Malveaux-Devillers made it her haven following her acceptance of Hound Agnello’s tenancy offer. It remained the Ventrue’s base of operations even when the domain reverted to the seneschal following the hound’s unseemly fight in Elysium, and in 2016 it officially became a part of her own domain and has remained such ever since, though her own presence in the building as waned in the following years.

In place of the Ventrue, the building is now the full-time home to the Red Right Hand, these nights comprising of Genevieve “Gina” Elsworth, Warren Kontkowski, Kenneth “Ken” Sanders, and Catherine Ward, as well as most of their large and growing collective stable of ghouls. That the krewe makes its home in the building is one of the least well-kept secrets in the city, though exactly how extensive their control is, and where in the building their individual havens are, is more opaque.

Much like their patron before them, the Red Right Hand’s members tend to prefer conducting business on the roof, in either the penthouse or in the open air around the pool. The larger meeting area suits their own numbers and the semi-public nature of space helps obfuscate their actual havens and working spaces within the building to guests. Those working spaces include a small Sanctified chapel and working office for Ms. Ward, an armory maintained by Mr. Kontkowski, and an office and planning space they collectively make use of for Kindred matters.

Though she rarely makes use of it these nights, Ms. Malveaux-Devillers maintains a heavily reinforced apartment haven on the 6th floor. Most of the other apartments she converted during her time have turned over to the Red Right Hand for their own use.

Caroline neither advertised her quiet 2015 takeover of the Giani Building, nor did she make a great secret of it. Her control over the building’s security and other facilities, along with its location in the relatively small then-domain of Rocco Agnello, made it an attractive place for private meetings. She wasn’t so careless as to invite others into her haven—at least not casually—but the upper deck house (nominally closed after 11 PM, but good luck getting security to enforce it against her) is both tasteful, private, and secure enough that Caroline was (and remains) comfortable meeting others there as needed with little fear of interference, eavesdropping, or projecting the wrong image. 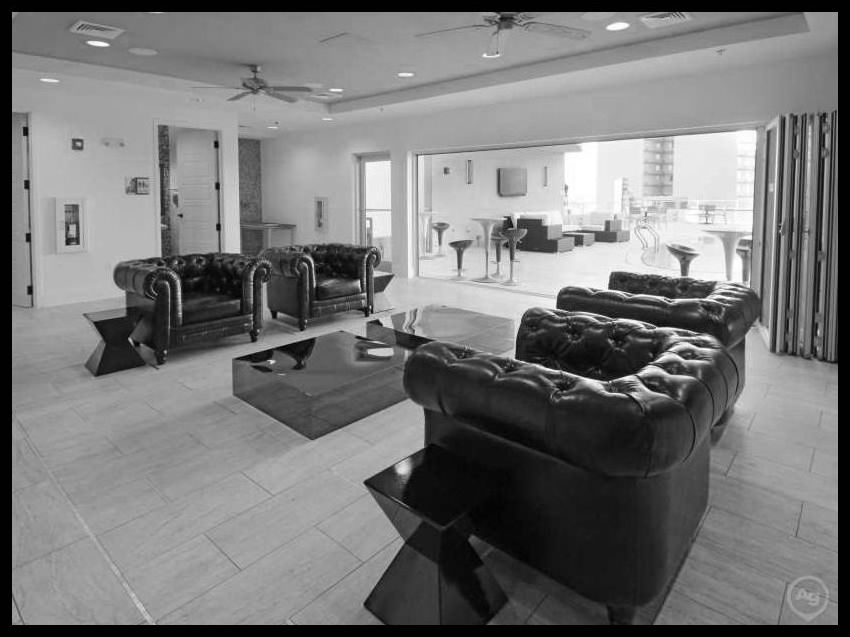 For larger gatherings, Caroline and the building’s new Kindred tenants has the option of moving out into the deck itself, which is similarly tasteful and private—though not so much as the deck house. She hosted a few social gatherings (a less civilized individual might call them parties), but for the most part the open deck served as a private area in which she could get away from the world in the late evenings and early mornings. It’s open to the sky and city, and one place in which she could get away from Kindred life for a time. An outdoor sanctuary in which she could soak in a pool, or a hot tub, or lay out under the stars for her own enjoyment. It was also a place in which she could entertain mortal company without much fear, be they potential members of her herd, individuals she had under her thumb, or simply those few she tried to maintain a more conventionally human connection to, without exposing them to dangerous secrets (for them) such as her haven’s exact location or layout. 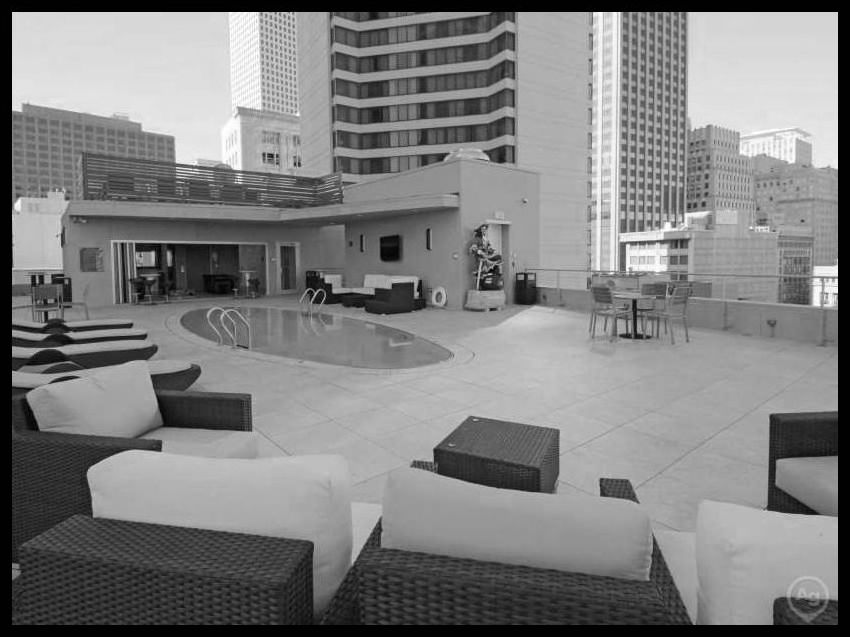