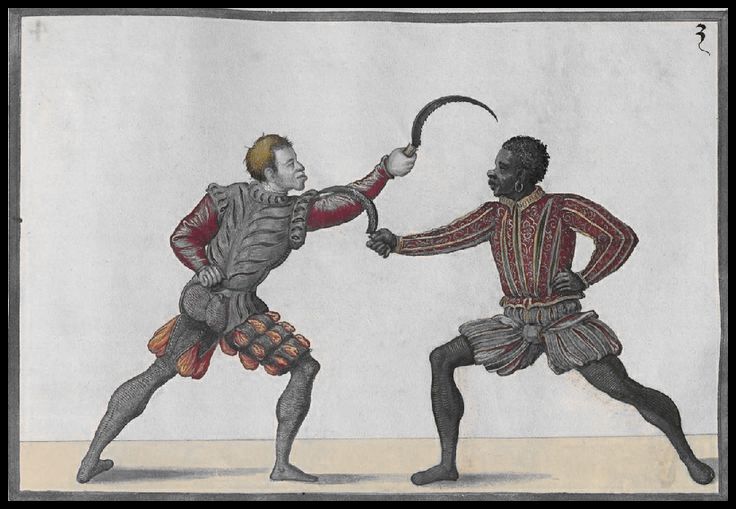 Système d’Armes, New Orleans (SDA NOLA) is a HEMA study group formed in 2004 by the since deceased Bill Morello and currently headed by Marcus Dressler. The purpose of SDA is for its members to learn to fight, particularly with swords but with other weapons as well, based on techniques from fencing manuals written in medieval and Early Modern periods, primarily from Italy and German-speaking Central Europe. SDA was born from an earlier and less organized group called the Slum Fu Stompers, which was active since the mid 1980’s and includes members with various martial backgrounds including Japanese, Chinese, and Filipino martial arts, Marine Corps combatives, collegiate saber fencing, and SCA rapier fencing.

SDA NOLA is active in the tournament scene and in historical research alongside the University of New Orleans History Department. Since 2009 the members have fought in major international HEMA tournaments in Sweden, Houston, and Maryland, as well as national tournaments in Boston and Tampa, Florida, and local events in Louisiana. Their members have made finals in several tournaments, won a bronze medal in Das Grublein (a form of German wrestling), at Longpoint in 2014, the Fechtschule America international longsword tourney in 2012, dussack open tournament in Sweden in 2010, and brought silver in the sidesword tournament at IGX HEMA in 2014. Three of their members are currently ranked among the top 100 longsword fencers in the US tournament circuit.

SDA is also active in research, notable contributions include significant developments and multiple translations by Marcus Dressler, lectures at Tulane University on Central European urban militias, transcriptions of historical treatises by founder Bill Morello, and talks on the context of the “informal” duel by Andrew Schindler (currently published in the academic periodical Acta Periodica Duellatorum). Thanks to the support of the community and members, System d’Armes is actively interested in the “H” in HEMA and conduct research both on the side of the manuals and fechtbücher as well as the historical context of European martial combat, with the co-operation of researchers in Canada, Sweden, France, the UK, and the US.

SDA is proud of the fencing and dueling traditions of New Orleans and hopes to honor its historical ancestors such as Don Jose “Pepe” Lulla and Gilbert Rosiere with fighting spirit and determination to learn their arts. They are also interested in the unique history, culture, and traditions of New Orleans which they seek to share with the rest of the fencing community. In the spirit of the city and region they try to get the most out of life and enjoy themselves, as they incorporate fun into their learning and training. Weekly social meet-ups on top of the thrice weekly held martial training. On the local / regional level, SDA has a close relationship with David Sadler’s HEMA fencing groups of Baton Rouge and the Louisiana based Ordo Procintus; one of America’s few full contact medieval fighting clubs. Friendly tournaments with Ordo Procintus and the Baton Rouge chapters are monthly, though full medical waivers are required to participate with the infamous Ordo.

• Marcus Dressler
Marcus is a student of combat, dance, and kinesthetics. He has spent over 20 years studying assorted practices such as Bagua, Capoeira, Xingyi, Silat and Systema, as well as classical Indian dance, Bharata Natyam, Flamenco, and even Yoga. He has been an instructor for System dArmes, New Orleans since its inception, and has taught at Fechtschule America, Longpoint, and the Boston Sword Gathering and teaches while he travels the world learning himself. He has been a Liechtenauer practitioner for seven years and is an avid translator. It is his aim to aid others in discovering the fundamental movements and theories of medieval combatives, and fostering the love and dedication to the lessons of the past. Talking to his students, they say he can sometimes be snooty, but tries earnestly to pass on his knowledge.

• Robert “Robby” Brant
Relatively recent graduate, corporate accountant and head of the local HEMA chapter. Socially awkward and nerdy, but very intelligent, Robby got into swordsmanship as a teen in part due to his love of fantasy, and in part due to his love of history. He continues through college and recently, on his return to New Orleans, established himself as one of the most experienced and skilled members of HEMA in the region. Humble and shy, he’s frequently underestimated right up until the moment he picks up a sword for a bout, at which point his lanky awkwardness tends to disappear. Prefers to fight sword and buckler, but is relatively well rounded across the board. Teaches open classes three times a week at a local gym that HEMA leases space from in the evening. Two other nights he runs Dungeons and Dragons games for many of those same HEMA attendees. Very tall (6’8"), thin, and lanky, with unruly hair and glasses. Avowed atheist that rarely speaks of it, but feels passionately against religion when pressed, citing all the historic misery it’s caused.

• Andrew Schindler
Andrew has been a student of German longsword and sabre fencing for the past 12 years. An instructor and co-founder of Systeme D’Armes with Bill Morello in 2004, and has been in it for the long haul while also expanding his teaching circle, and collecting medals in his preferred sword forms across the United States. Andrew Schindler has been writing, publishing, and lecturing on topics from urban militias of Medieval Central Europe for the yearly HEMA journal Acta Periodica Duellatorum, to having full publications in mainstream print. Jean was a founding member of the “Slum Fu Stompers” fight club back in the 1980’s, a far precursor dueling club he founded with the late Morello and fellow teacher Bryce Urquhart.

• Bryce Urquhart
Bryce has studied longsword and hammer fencing for 12 years and has been a member of Systeme d’Armes since it’s founding in 2004. Over the years, not to be outdone by co-worker and childhood friend Marcus Dressler, he’s taken multiple sabbatical from Systeme in which he studied capoeria, judo, tae kwon do, and kung fu in their native counties, a very Eastern martian art enthusiast in contrast with normal HEMA values. Skip was also a member of the “Slum Fu Stompers” fight club back in the 1980’s along with co-founders Dressler and Morello. With his natural towering size and trained skill, Bryce is a multiple medal holder in the Ordo Procintus circuit in Louisiana, often called “Bryce the Hammer”.