“Know the rules well, so you can break them effectively.”
Dalai Lama XIV 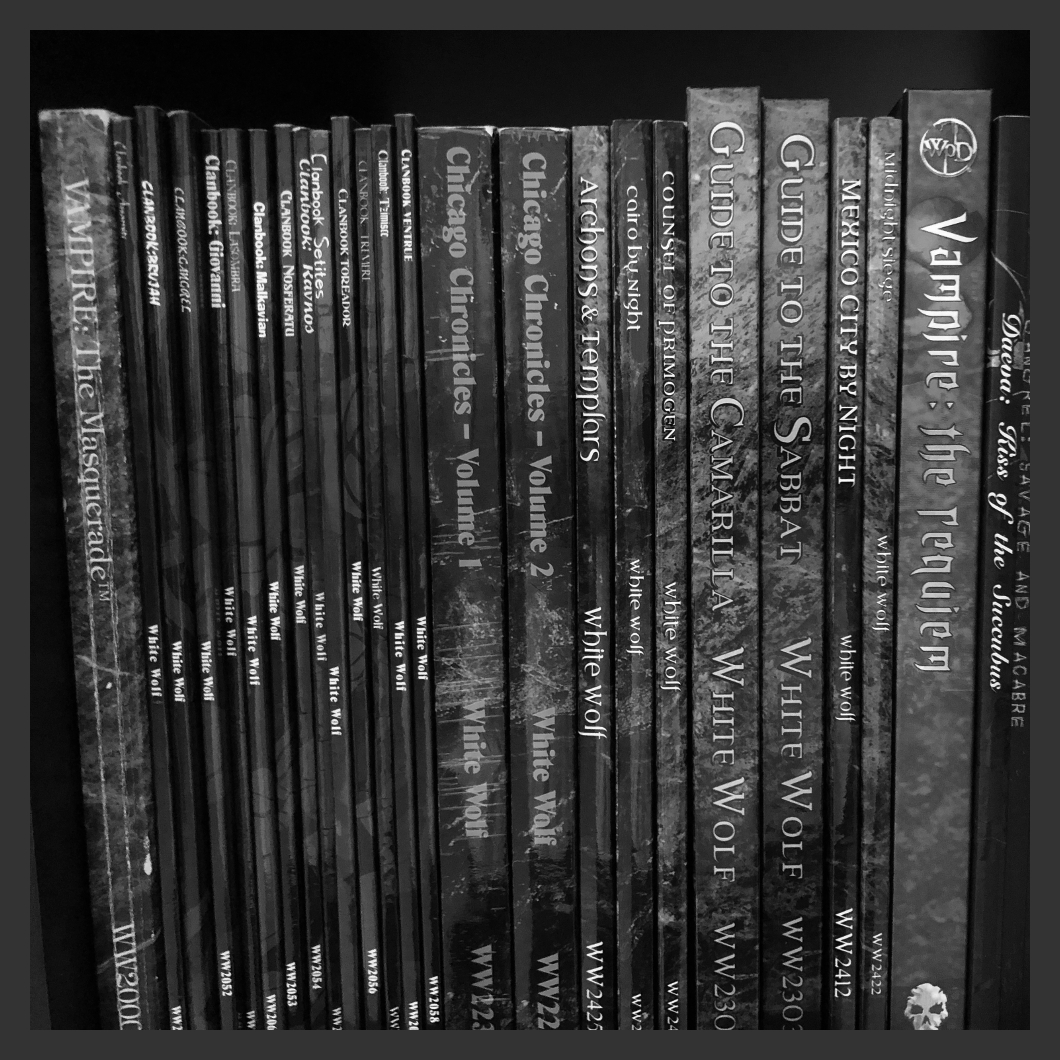 The GM has shared various PDFs with current and prospective players a million and one times. This page exists to provide players with a convenient place to grab those PDFs again at their leisure. Links are also included to other titles that players may find of interest.

Since it’s illegal to give away Onyx Path’s books for free to the whole internet, contact the GM to request access. Otherwise you won’t be able to download any of these.

Some background for players new to Masquerade/Requiem:

Vampire: The Masquerade is a game about vampires in a broader setting known as the Classic World of Darkness (CWoD) or simply the World of Darkness (WoD), published by White Wolf in 1991 (1st edition), 1992 (2nd edition), 1997 (Revised Edition), and discontinued in 2004. Onyx Path resumed publishing VtM books in 2011 with a 20th anniversary edition (popularly known as V20). It was not controversial among fans. Paradox Publishing put out a 5th edition (V5) in 2018 and is still publishing books for it. It has been more controversial. We play in Masquerade’s setting but don’t use its mechanics. We use setting elements from V20 and 5th edition.

Vampire: The Requiem is a game about playing vampires in the New World of Darkness (NWoD), recently rebranded the Chronicles of Darkness (CofD) to distinguish itself from the Classic World of Darkness/World of Darkness. Requiem was first published in 2004 and received a second edition in 2013. It’s nominally still alive/undead, but hasn’t had any new books published in several years. We steal lots of its ideas and chunks of its setting, but play predominately in Masquerade’s setting. We also don’t use Requiem’s mechanics.

• Vampire the Masquerade: Core Rulebook: Vampire’s setting core rulebook. Gives a concise rundown of the sects, clans, Gothic-Punk milieu, and everything else that makes the game setting what it is. As stated, it was less controversial than 5e, and intended less as an edition in its own right than a compilation of previous editions (though with time and subsequent publications, it became such). New players who want to read more about the game should start here.

• Lore of the Clans: An in-depth look at the thirteen clans (and Caitiff), covering their traditions, belief systems, histories, and more. Very tightly written, unlike the original 100+ page clanbooks. It’s probably my favorite of the books published for V20. Any player, new or old to the game, will benefit from reading the chapter on their PC’s clan.

• Anarchs Unbound: A guide to how the Anarch Movement functions in the 2010s. Primarily concerns Anarchs, but also addresses the larger topics of how elder Kindred relate to neonates, the internet’s role in the Camarilla, and how the Ivory Tower has dealt with the 21st century’s social changes. Ignore the silly bit about Anarchs causing the ‘07-’08 financial crisis. (Or assume it to be Anarch propaganda.)

• The Book of Nod: The origin myths of the Kindred, legends of Caine and the Antediluvians, and an explanation of how the Great Jyhad functions.

• Guide to the Camarilla: The definitive Revised-era sourcebook on the Camarilla. Players of politically-minded PCs should give this a read.

• Lore of the Bloodlines: Lore of the Clans’ companion book, written for bloodlines and aimed at making many of the previously less playable ones more playable.

• Rites of Blood: Masquerade’s mega-compilation of all forms of blood magic. Awesome flavor with lots of cool powers.

• V20 Companion: All the odds and ends the writers of V20 didn’t have room to cover in the V20 core rulebook, including prestation, titles and offices, and the impacts of 21st century technology on Kindred society.

• World of Darkness: Sorcerer: Technically a Mage: The Ascension rather than Vampire: The Masquerade book, it contains a bunch of stuff on hedge magic and psychic powers that are usable by mortals and (to a lesser extent) ghouls. Skip if you’re not interested in that stuff.

Vampire: The Requiem/Chronicles of Darkness Books

We use much of the flavor from these books with tweaks to fit the CWoD’s setting.

• Blood Sorcery: Sacraments & Blasphemies: Everything about Cruac and Theban Sorcery in VtR. Rites of Blood provides a better thematic overview of Blood Sorcery, but this book goes into somewhat more depth about those two varieties (which don’t exist in Masquerade canon).

• Ghouls: White Wolf has published four books mostly about ghouls. There was Ghouls: Fatal Addiction (for 2e Masquerade) in 1997, Ghouls (for 1e Requiem) in 2005, Ghouls & Revenants (for V20 Masquerade) in 2016, and Half-Damned (for 2e Requiem) in 2017. The one linked here is Ghouls (2005), and the GM considers it the best of the four. The mostly definitive sourcebook for all things related to ghouls. The opening fiction piece drives home the book’s themes superbly.

• Invictus: The definitive sourcebook on the Invictus. Some of the biggest differences in our setting include the Invictus being a globe-spanning rather than localized organization, and being founded in the 1400s (rather than 400s) after the Anarch Revolt and Inquisition largely destroyed the previous Cainite feudal courts.

• Mirrors: The book that Declarations were originally from. Toolbox with a million and one different mechanical ideas for groups to use.

• Second Sight: The NWoD version of WoD: Sorcerer, with lots of content for hedge magic and psychic powers. Still manages to explore interesting new ground despite covering the same subject.

• The Testament of Longinus: No game mechanics anywhere in this book. It is essentially the Bible of the Lancea et Sanctum, and worth a read to any player who’d like more insight into the covenant’s spirituality.

These are some of the GM’s other favorite game lines. They’re included here mainly for player entertainment, as B&B is a Masquerade game with limited (but not nonexistent) crossover. PCs aren’t expected to know any of the stuff detailed in them, and most of it would be of limited applicability anyway.