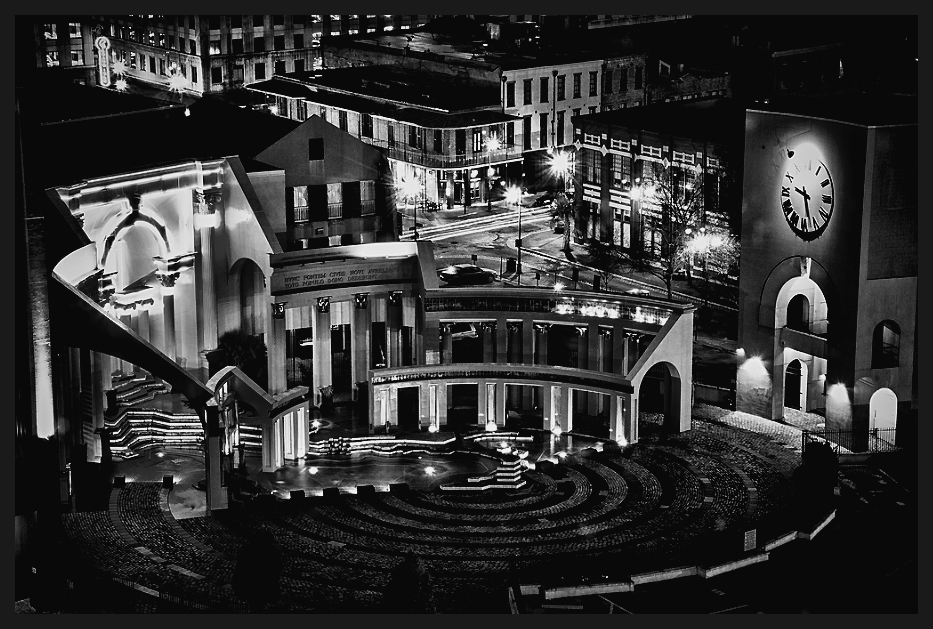 It is one of the most debated, celebrated and acclaimed examples of postmodern architecture in the world. Created as an urban plaza and monument to this city’s Italian community—the first large scale Sicilian community in America—the Piazza d’Italia was designed by Charles Moore, a former dean of the Yale architecture school and influential pioneer of postmodernism. Declared a masterpiece even before it was completed in 1978, it leads a surprisingly obscure existence in the CBD literally in the shadows of far less celebrated structures. And like celebrities who shine brightly at first only to slide slowly downhill, the Piazza d’Italia has led a checkered existence over the years, and was even declared an urban ruin less than a decade after its completion when its maintenance plan fell victim to changing economic times. Like a misunderstood genius in need of a sponsor, it was rescued by the Loews hotel chain, which renovated the adjacent old Lykes office building into visitor accommodations in 2003, and devoted over $1 million to restoring the Piazza to its former glory as part of the deal. The Piazza d’Italia tonight looks beautiful now that its fountain in the shape of Italy, once barren and dusty, glitters with clear water and the neon traceries over its surreal stylized arches and colonnades glow in the luminous shades of a confectionery rainbow.

Even so, it might still seem a little lonely as an obscure aesthetic oasis in that bustling neighborhood of office towers, hotels and casinos if not for a new addition that suddenly appeared like an apparition in a strategic spot on the plaza. It is Sophia Loren, no less, that voluptuous cinematic goddess of all things Italian, rendered in bronze in a brilliant gesture by acclaimed Milanese sculptor Francesco Vezzoli as his contribution to the Prospect.2 Biennial. Loren devotees have noted however, that this rendition of the statuesque diva features some distinctly idiosyncratic touches, not the least being an architectonic bas relief nestled in her arms, covering her storied bust.

The amateur aesthetic investigator can consider this their own DA VINCI CODE moment. One who recognizes that mysterious bas relief as a Giorgio De Chirico painting is in on the the secret of the Piazza’s design plan, for architect Moore was indeed inspired by a series of De Chirico paintings all bearing the same PIAZZA D’ITALIA name, many of which featured a statue of the Greek goddess Ariadne situated in the same spot Loren now occupies. While borrowing De Chirico’s abstracted forms, Moore, in collaboration with local Perez firm architects Allen Eskew, Ron Filson and Malcolm Heard, employed buoyant neon colors to make this Piazza d’Italia more like a Fellini movie set where a cameo appearance by a Sophia Loren would not be unexpected. All of which may have come as a surprise to anyone anticipating something more like a classical Palermo piazza, but even here it should be noted that De Chirico’s father was a son of Sicily, so the circle remains unbroken. And that is how, instead of simply reflecting history, the Piazza d’Italia ended up making architectural history instead.