“EVERYONE YOU HAVE KNOWN OR EVER WILL KNOW, EVENTUALLY ENDS UP AT THE OLD ABSINTHE HOUSE”
- The House’s motto 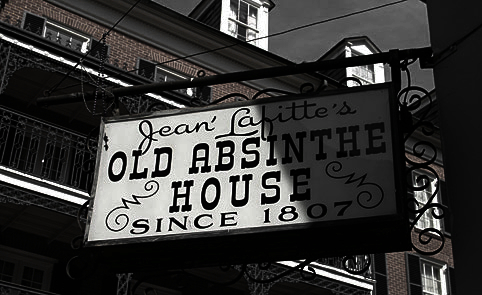 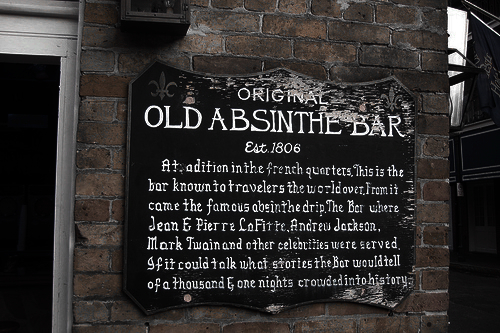 Built in 1806, Old Absinthe House was erected by Pedro Front and Francisco Juncadelia of Barcelona to house their importing firm. For the next forty years, trade continued in the bartering of food, tobacco and Spanish liquor as a sort of early “corner grocery.” The sign uses Jean Lafitte’s name because of the rumored meeting between the famous pirate and Andrew Jackson as they planned the victory of the battle of New Orleans on the second floor.

In 1815, the ground floor was converted into a saloon known as “Aleix’s Coffee House” and was run by the nephews of Senora Juncadelia. This coffee house was later rechristened “The Absinthe Room” when mixologist Cayetano Ferrer created the famous Absinthe House Frappe, a now-illegal liquor, in 1874. The Old Absinthe House still prides itself on maintaining the 200-year-old decorative marble fountains that were used to drip cool water over sugar cubes into glasses of absinthe.

The original Old Absinthe House bar was to be destroyed at the start of Prohibition, as a powerful message to proprietors and others that absinthe was to be abolished from the United States and would not be tolerated. The bar was removed from the Absinthe House and moved under cover of darkness to a warehouse on Bourbon street in order to save it.

Absinthe House was reopened after Prohibition and remains in operation to this night as a popular bar and restaurant. Even the original bar was returned to its home in 2004 after a $3 million renovation indirectly sponsored by Antoine Savoy and Barthelemy Lafon.