Celia: She had not thought to see him again.

She had been to the funeral, seen the casket, watched them lower it into the ground. It had been a fight to even attend, two days of pleading with her domitor and then paying for it later. And now she knows the truth: the casket had been empty. He is alive. Alive and whole and —

No. Not alive. Dead. Dead, like the others, and she cannot help but think the word despite its crude connotations in polite society. Vampire. It’s a shout in her head. vampire vampire vampire
vampire
vamPIRE
VAMPIRE

Instinct tells her to run screaming. She takes a step backward but Pietro’s presence is strong at her back. He presses into her from behind. Before she can begin to maneuver around him she is across the room on the dead man’s lap. She hadn’t seen him move.

Veronica hisses. There’s an answering laugh. The blonde woman in the turtleneck says something about letting them play.

Celia can’t hear her over the pounding of her heart. Her breath comes in shaking fits and starts. She can’t look at him, can’t wrap her mind around what he has become. Vampire. Undead. Kindred. Whatever name she calls him by will not be as sweet as what she knew him as: Stephen.

She read once that people think rabbits are docile and want to be picked up or played with because of the way they go still when someone reaches out to touch them. Really it is just terror that freezes them that way. Celia is a rabbit now and he the fox, or wolf, or falcon come to take her away. She is motionless on his lap, her shoulders hunched and body curled inwards as if that will protect her from him. As if he cannot hear the thump of her heart or the rushing of her blood through her body. As if her pulse points are not beacons, aching to be punctured. She acts as if making her smaller will keep her safe.

Only there is no safety here.

He is a monster and she the maiden, and when he whispers her name against her hair and kisses the crown of her head she is brought back to that night in her dorm. The bed was soft then. His hands were gentle, his touch fleeting, his mouth warm. But he is cold now. His touch, his skin, his piercing gaze. Cold and hard, his limbs a steel trap around her. His hand grasps her chin and forces her neck up and she thinks this is it. But instead of biting he is kissing. His lips press against hers. His tongue plunders her mouth. Seeking. Claiming.

He had been her first and now she is his again, and there is some part of her, some small voice inside of her mind, that wants him. That misses him.

Fabric rips. She is exposed to the room, his hands sliding down the front of her shirt. He cups her breasts and flicks his thumbs across her nipples. She makes a noise and he does it again, harder, and from somewhere nearby she hears Veronica say “she likes it rough.” There’s a growl, then more hands on her, and suddenly her skirt is gone and his head is buried between her thighs.

Her back arches as two points of fire sink into her loins. She loses herself to him.

Celia: When he is done with her she is woozy. Her mind is fogged with the aftereffects of ecstasy. Her body is sore in all the right ways.

She presses herself against him, her head resting almost comfortably on his shoulder. Her legs are draped on either side of his lap, his arms once more around her. He is warmer than he was.

His fingers trace slow circles up and down her spine. She is all to aware of her human fragility: how easily he could crush her if he chose. A single blow against the right spot would paralyze her for life. Her body is sluggish. Heavy. She focuses on that instead, on the way she sinks into his arms as if she had never left.

As if she had never left.

“This is why you disappeared,” he says, echoing her thoughts.

She nods, the movement small.

She closes her eyes, nodding again.

She shakes her head.

“You,” she says, whisper-soft, the first word she has spoken since her arrival. “I am – was – claimed. They would have killed you. And hurt me.”

“Ghouled.” His hand trails through her hair. She leans into the touch. “Ghouled, not claimed. Claimed makes it sound like she has plans to Embrace you. She doesn’t. You are nothing. No one. Beneath us. I had you to get you out of my system, but you are just a toy, Celia. A passing interest.” He cups the palm of her cheek in his hand, wiping away the tears that flow down her face. “Did you think I could love you as you are? No. No, never. I’ll have you again, I’m sure, we all will. But your rightful place is beneath us. Remember that.”

One smooth motion has her off his lap and on the floor at his feet.

Just like that her heart breaks all over again. 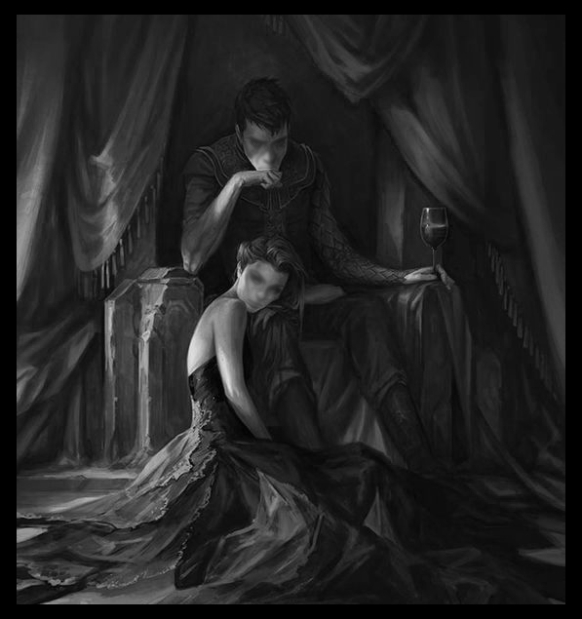