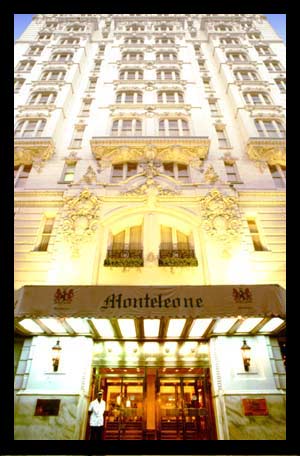 It’s been said that the French Quarter begins in the lobby of Hotel Monteleone. This venerable New Orleans hotel sits majestically at the foot of Royal Street and proffers a point of departure for all things New Orleans, including Jackson Square, Bourbon Street, the French Market, and the Riverwalk, where steamboats still glide along the Mississippi River. The only high-rise building in the interior of the French Quarter, the hotel boasts the eclectic flair of Beaux-Arts architecture that has made it a historic landmark, acknowledged by the Historic Hotels of America as well as the National Trust for Historic Preservation. Comprised of 600 guests, including 50 suites, two restaurants, including the Criollo Restaurant, the Carousel Piano Bar & Lounge, boutique shops, a heated rooftop swimming pool, spa and exercise facilities, and a business center that features over two dozen reception and meeting rooms.

Beyond such physical attractions, Hotel Monteleone is renowned for being the favored place of stay for many Southern authors, such as Tennessee Williams, Truman Capote, Ernest Hemingway, and William Faulkner (not to mention Anne Rice, Stephen Ambrose, and John Grisham), and has been featured in myriad literary works, such as The Rose Tattoo, Orpheus Descending, Divine Secrets of the Ya-Ya Sisterhood, Band of Brothers, A Piece of My Heart, A Curtain of Green, Owls Don’t Blink, Night Before Battle, and Voice of the Seven Sparrows. The hotel has similarly attracted the attention and use of numerous film producers as well.

Often featuring prominently in the hotel’s literary as well cinematic depictions is its Carousel Bar & Lounge. The city’s only revolving bar, the twenty-five seat, bright circus-clad Merry-Go-Round turns on 2,000 large steel rollers, pulled by a chain powered by a one-quarter horsepower motor at a constant rate of one revolution every 15 minutes. During the 1950s and 1960s, the Carousel Bar was also the site of a popular nightclub, the Swan Room, where musicians such as Liberace and Louis Prima performed. The bar celebrated its 60th anniversary in July 2009, having been originally installed in 1949. Renovated in 1992, the current carousel top features fiber optics that create the appearance of stars in the night sky, complete with a regular shooting star that races across the ceiling. One shooting star crosses the room at regular intervals. Notably, the Carousel’s bartenders created Vieux Carré Cocktail and the The Goody. The sum of all these features has made the ironic bar, and its hotel, a favorite spot in the Big Easy for both its locals and tourists alike. 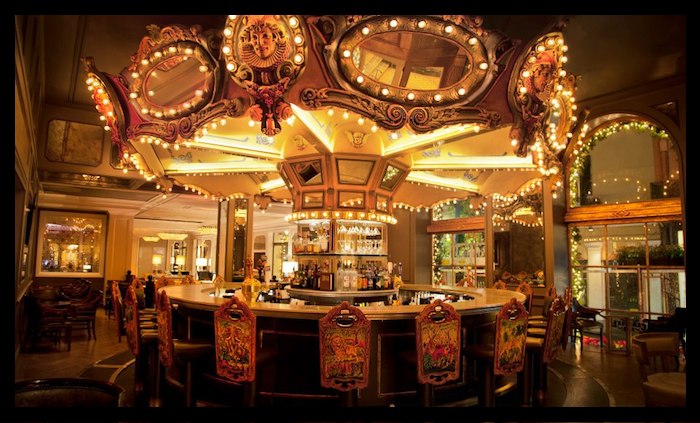