Guide to the B&B Discord Server

“Discord is a better platform for gaming that Google Hangouts. Can’t believe we used Hangouts for so long.”
—The GM

“I was apprehensive at first, but I’m sold, hook, line, and sinker.”
—Sam 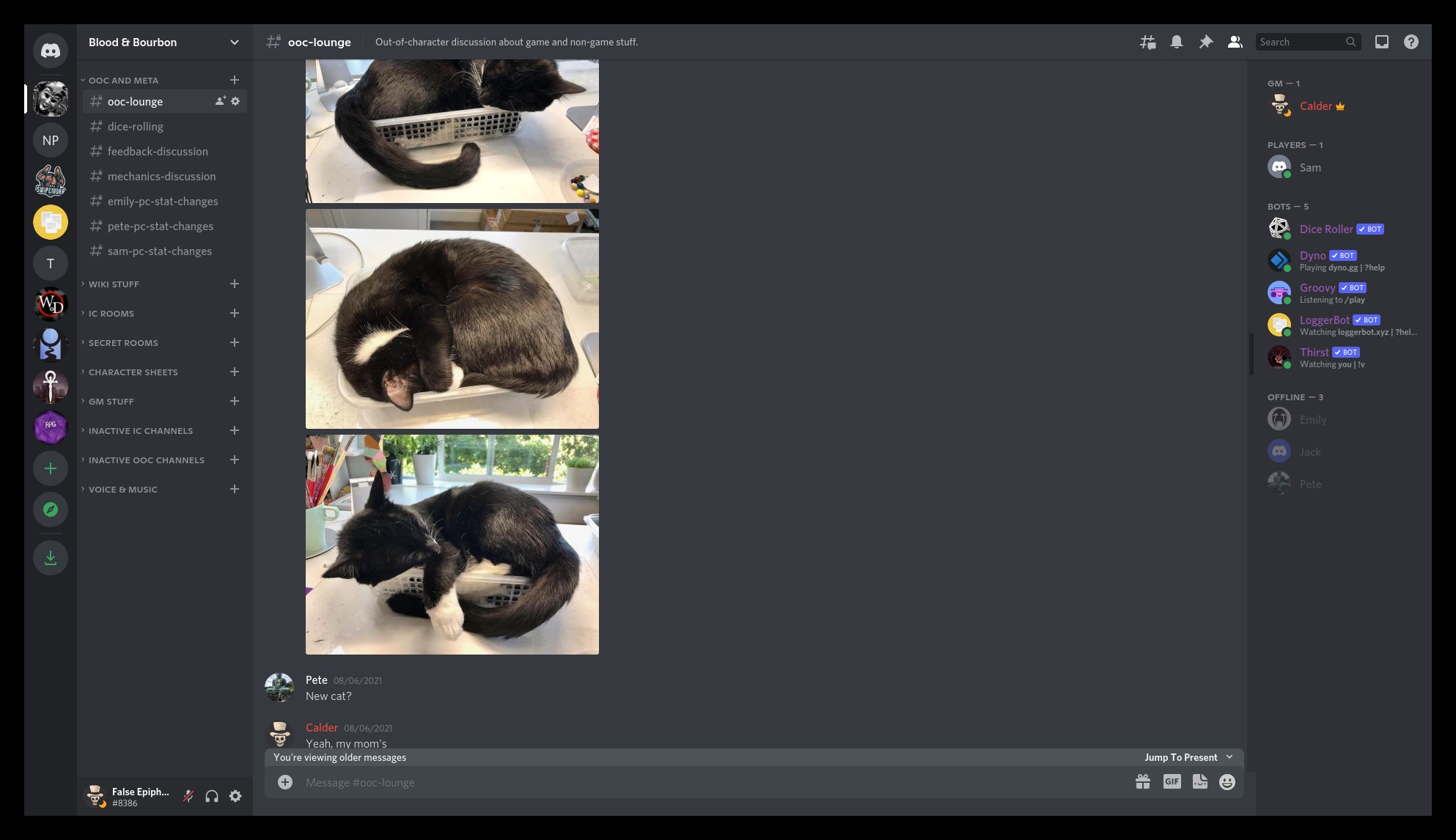 The B&B Discord server has a lot of channels. This page exists to get new players up to speed on what they all do, what notification settings players should use, and to save the GM the need to explain this multiple times for multiple players.

• ooc-lounge is for out-of-game chatter among players and the GM. It’s where we talk about anything related or unrelated to the game, be that declaring actions, asking the GM questions, talking about books and movies or real life, or whatever else we feel like chatting about. Pete posts a lot of memes.

• dice-rolling is for dice rolls. We don’t post anything in there except for dice rolls and immediately relevant questions or actions (e.g., “Does Advantage apply?” or “I’m going to spend 2 Willpower to boost this dice roll to 4 successes.”). Sometimes players or the GM need to reference prior dice rolls, so we try to keep the channel un-cluttered by extraneous OOC chatter.

• feedback-discussion is for, as the name implies, discussion about player feedback on the adventure logs. Feedback is described elsewhere on the wiki, but in brief, players and the GM provide commentary on adventure logs as a tool to reflect on recent IC and OOC events to improve the game. Feedback discussion can run on for a while, so it gets its own channel to avoid interruptons from the OOC lounge (where there’s often a lot of talking).

• mechanics-discussion is for discussion about game mechanics. Since we use an original ruleset that’s effectively being playtested by the group, and the GM loves tinkering with rules, we talk about game mechanics semi-regularly. It likewise gets its own channel to avoid interruptions from the general OOC channel.

• [your name]-PC-stat-changes is where you and the GM post changes to your PC’s fluctuating game stats: e.g., XP awards and expenditures, Hunger and Willpower increases and decreases, Conditions like Injured, etc. The purpose of these channels (every PC gets one) is to keep a convenient record of all this stuff and reduce the possibility of GM/player bookkeeping errors. If you have multiple PCs, you keep track of them in the same channel.

• setting-wiki-updates is for new content added to the Obsidian Portal wiki. We have this channel because the GM makes periodic minor tweaks to wiki pages, so the Stream on OP shows tons of updates that aren’t substantive updates, effectively making it impossible for players to see new content unless they’re actively hunting for it. So, said content gets posted in this channel for ease of reading. Whenever a player adds new content to the wiki, they or the GM reposts it here too.

• log-updates is where the GM posts links to new adventure logs. This gets its own channel (it used to be part of setting-wiki-updates) because the GM posts them so frequently. The GM will tag you whenever a new log for your PC goes up: at that point, you can re-read it and post feedback to receive any trait increases from the log.

• metagame-updates is for changes to the game’s ruleset and metagame policies. For example, if the GM changed sunlight damage to be more or less deadly, or changed how long vampiric torpor lasts, it would be posted here.

• new-toys is for new Devotions, Edges, and banes, as well as changes to existing ones. The GM posts these “new toys” periodically enough they get their own channel too. They’re also optional components of the game: individual PCs may or may not take them, unlike mechanical changes posted under metagame-updates, which typically affect all PCs.

• scripts-and-resources includes several pieces of bbcode we regularly use for wiki-related things; it’s here so players can grab it at their convenience. This channel also contains a link to the Google Map of locations and vampire territorial boundaries (something that’s come up very often IG).

• [your-PC] is where we roleplay your PC’s interactions with the game world. This is where the fun stuff happens.

• [your-PC-1, 2, 3, etc.] are optional additional channels we may use to roleplay multiple scenes for your PC simultaneously or while your PC’s main channel is paused.

• [the-other-PCs] are the in-character channels for the other PCs. Self-explanatory too. They also get -1, -2, -3, etc. and -secret iterations.

• crossover is for any scene where two or more PCs are simultaneously present. They also get -1, -2, -3, etc. iterations.

• [your-PC]-secret is an in-character channel that only you and the GM get to view: it usually contains in-game information the GM doesn’t want other players to see (at least for now). For example, suppose you and another PC are roleplaying a scene with a Ravnos in a crossover room. The Ravnos uses Chimerstry to create an illusion that your PC sees through, but the other PC doesn’t; the GM would post what your PC actually sees in this channel to keep it secret from the other player. Obviously, you shouldn’t talk about what goes on in the -secret channel to other players, as that defeats the point of having it in the first place.

• [your name]-secret-rolls is where you make dice rolls the GM wants to keep secret from other players. Most rolls will be made in the public dice-rolling channel, but this one is there if we need it.

• the other players also get these channels for their PCs.

• [your PC]-sheet is where you post your PC’s character sheet. You also keep track of blood bonds, Debts, and Aspirations here.

• [your PC]-retainers is where you keep track of the stats for your PC’s Retainers, if they have any.

• [your PC]-peripherals is an optional channel you can use to store notes, secrets, and assorted odds and ends you want to keep track of for your PC. Some players have used these channels and some haven’t.

• [your-other-PC] If you have more than one PC, your other PC gets all of the above channels too.

• the other players also get these channels for their PCs. Since PvP is allowed in the game, and PC stats are kept private between their player and the GM, these channels are invisible to other players. (This channel category consequently looks smaller to players than it actually is.)

Like the name implies, this category has some GM-only stuff. Players can’t see it, but I include it anyway for people wondering what’s there.

• scratch-pad is a channel the GM uses to draft posts and jot down random stuff.

• gm-rolls is a channel the GM rolls dice in. By default, players roll all of the dice under the rules system we use, so its use is sporadic.

This category is for in-character channels not in active use use. Many of them are channels for former PCs. When we’d use one of these rooms again, the GM moves it to the IC Rooms category, and moves it back here when/if it’s no longer in use.

This category mostly contains the character sheets and OOC rooms of PCs no longer in active play.

Sometimes the players and GM feel like hopping on for a voice call together, so we do that here. B&B remains a text-based game, so nothing in-character ever happens ever. It’s purely for non-game-related fun.

Discord offers a lot of different notification settings. By default, they’re all on.

If you want to leave them on, that’s cool. This is best if you want to get updates whenever there are new posts in any of the game’s channels.

If you don’t want to get notifications every time there’s a post in a channel, that’s also cool. The GM pings or DMs players whenever there’s something he specifically wants them to read (like dice rolls for their PCs), which sends you a notice regardless of your notification settings.

Regardless of what notifcation settings you use, the GM asks that players always leave notifications on for the following channels, because it can impede the game when players miss posts here:

• OOC and Meta: [your name]-PC-stat-changes: So you can keep abreast of changes to your PC’s game stats.
• Wiki Stuff: metagame-updates: Because the GM posts semi-periodic changes to game mechanics and those impact your PC.
• IC Rooms: [your-pc]: Obviously, this is where the posting happens.
• Secret Rooms: everything: Because you can only see the ones relevant to your PC anyway.

The GM also recommends leaving on notifications for the following channels, though it doesn’t impede the game either when players don’t:

• Wiki Stuff: setting-wiki-updates: If you’re a player in B&B at all, chances are you enjoyed reading the wiki. Keep abreast of new material in this channel.
• Wiki Stuff: log-updates: The GM pings players whenever new logs go up for their PC, but semi-regularly reposts logs for older PCs. Most players enjoy reading those when they go up. Likewise for finished logs for other currently active PCs.
• Wiki Stuff: new-toys: There might be new things here you want to pick up for your PC.

Guide to the B&B Discord Server