“As we Italians say, ‘Mi casa, su casa’.”
“That’s Spanish, you moron—and this ain’t your house. It’s mine.”
—Exchange between Dino and Benedetto Giacona

“I hear’s the lion’s been in some of Fat Benny’s films.”
—Bruce “Maneater” Bufalino 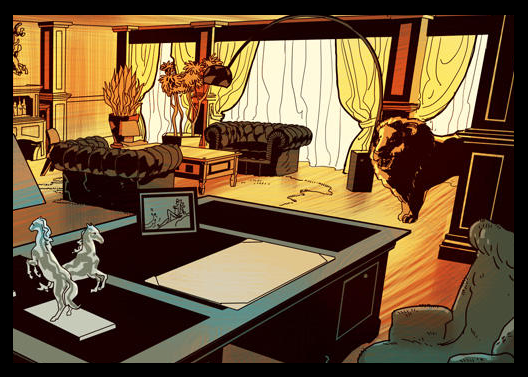 Underboss Fat Benny Giacona grew up in the French Quarter, and although he owns multiple homes in Miami, New York, and Chicago and a boat-house on Lake Pontchatrain, he spends most of his time inside the half-city block where the Giocano family has lived since the 1890s. In particular, Fat Benny, alongside his wife and son, reside inside the same manse where Don Corrado Giacona ruled the Black Hand. Located on Charles Street, the renovated mansion’s entrance has an old iron bell located next to a state-of-the art set of surveillance cameras and speaker-box. To those granted entry, a bronze-gilt gate set in a domed archway leads into a courtyard surfaced with soft-red brick. Inside, manifold flowerbeds bloom with yellow and white roses, irises, hibiscus, and Hong-Kong orchids. Banana and umbrella trees and windmill palms grow along the walls, while the walk-around balconies drip with bougainvillea and passion-vine. A French marble pool sparkles in the sun, glittering like a breathing, azure mirror. Nearby, a hammock and an antique gramophone rest in the shade, a favored locale where Fat Benny enjoys reclining like a beached whale as he listens to the likes of Caruso, Domingo, and Lanza. Few beside close family are granted access to the manse’s interior, but the floor-to-ceiling windows and glass-paned French doors leave little doubt to the opulent decor therein: pressed-tin ceiling with medallions and chandeliers, marble mantels, scroll-work moldings, and other similarly luxurious furnishings. Apart from the house proper, a small set of rooms is provided to Fat Benny’s guards; furnishings include a set of surveillance screens, a billiards table with emerald-green felt, a collection of old tommy guns, a private studio, a richly appointed safe-room, and an office with a stuffed lion added seemingly as an after-thought.