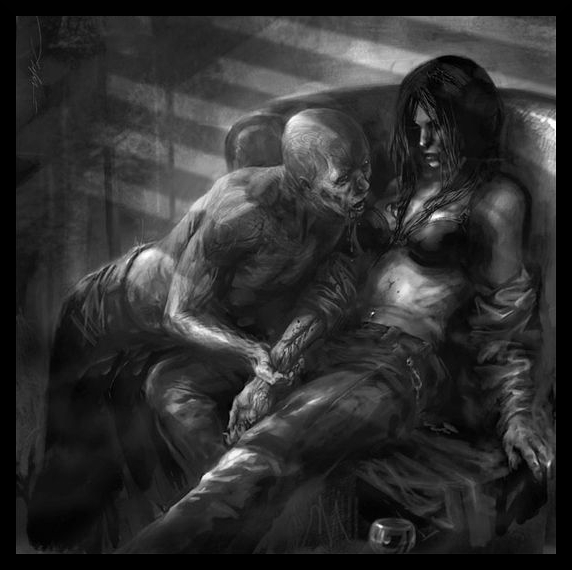 A vampire’s blood has great power—power that can be passed on. Long ago, Kindred discovered that mortals who drank vampire blood gained a smidgeon of the powers of a true vampire—along with equally dark appetites. Vampire blood proved incredibly addictive to mortals, who would do anything for more after they experienced that first sweet hit. Soon it became common practice for vampires to keep favored servants, fattening them on vitae, and blood bonding them in the process. In doing so, they created undying, hellishly loyal servitors who are both more and less than human—ghouls.

Except where noted, ghouls use all the rules for mortal rather than vampire characters.

Just like every vampire is a predator, every ghoul is a junkie. Ghouls can glorify in their addiction or they can hate themselves for it, but at the end of the day, that’s what they are.

Instead of Hunger, ghouls have Craving, with a maximum rating of 8 instead of 10. They make Rouse checks to fuel their powers just like vampires do.

• Craving 0: The ghoul is clear-headed and sober. Their Craving is so suppressed they don’t have to make Resolve + Composure rolls to turn down potential hits of vitae.

• Craving 1-5: The ghoul is functional. Some part of them wants more blood, but not enough to interfere with their duties.

• Craving 6-7: The ghoul is “jonesing” and loses a Story Point point during any scene where they don’t try to obtain another hit of vitae or quit cold turkey altogether. Many exhibit shakes, sweats, and other telltale signs of addiction.

• Craving 8: The ghoul has burned through their vitae and loses all of their powers as a ghoul (including Disciplines) until they score their next fix. Since the ghoul’s aging is no longer suspended, their true biological age gradually catches up with them. The older the ghoul, the more desperate they usually become to get a fix.

Craving and New Ghouls: Newly-created ghouls have Craving equal to the number of Rouse checks their domitor made to feed them. A stronger first hit leaves the ghoul that much hungrier for more. Creating a ghoul is much “cheaper” than Embracing a vampiric childe, who starts at Hunger 10.

Vampires make Rouse checks whenever they rise from daysleep. Ghouls only make a Rouse check every week as they burn through the reserves of vitae in their system. On average, a Craving 4 ghoul can go eight weeks without blood before hitting Craving 8 and losing their powers.

Most vampires feed their ghouls once every two weeks. Many domitors look poorly upon ghouls who are “weak” and “unable to control themselves” (that is, roll poorly and pick up more than 1 Craving). On the flip side, few ghouls who roll high enough to pick up no Craving will tell their domitors. Junkies aren’t known for turning down fixes.

Many domitors give extra blood for good behavior and withhold blood for bad behavior. A ghoul doesn’t actually risk frenzy at high Craving, so the thinking goes it’s okay to let them endure it if they aren’t expected to make many imminent Rouse checks on their master’s behalf.

Whenever a ghoul feeds on 1 Rouse check’s worth of vitae from a vampire, they slake 1 Craving.

Whenever a PC ghoul turns down an opportunity to score a hit, roll Resolve + Composure (variable DC) to resist losing (DC – rolled successes) Story Points. Ghouls at Craving 0 don’t have to make this roll.

Whenever a PC ghoul scores a hit their domitor wouldn’t have given them anyway, gain 1 Story Point. This is meant to encourage players of ghoul PCs to engage in junkie-like behaviors to feed their addiction as often as possible (e.g., injuring themselves so their domitor gives blood to heal them), even when there’s no benefit to doing so.

Ghouls can who drink enough vampire blood can fall to Craving −1 and below. This lets them make more Rouse checks to use their powers, not to mention feels good to experience such a deep hit.

The tradeoff is they can OD. When a ghoul overdoses, roll the following.

Botch: The ghoul falls to Injured −6 and dies without immediate medical attention.

Setback: The ghoul has enough time to take a single action (such as making a brief phone call) before falling to Injured −5 and passing out.

Success: The ghoul is fine.

Overdoses among ghouls are uncommon, as most domitors are tight-fisted with their vitae, but it can happen among truly pampered ghouls—or rogue ghouls who capture a vampire and can’t restrain themselves from draining the helpless lick completely.

There is one dubious benefit to ODing: a ghoul who dies from an overdose has a chance to arise as a vampire. The more potent the vampire’s vitae, and the bigger the ghoul’s hit, the more likely this is. When a ghoul dies from overdosing, roll a number of dice equal to (double vampire’s Blood Potency) against a DC of (10 – Craving slaked). On a success, the ghoul experiences a postmortem Embrace and arises as a vampire with the next nightfall. Some ghouls are known to commit suicide via overdose in hopes of becoming Kindred, but it’s a hell of a gamble.

To come, and probably not for a while, given how we haven’t seen any IG ghouls (PCs or otherwise) who’ve tried to kick the habit.

By making a Rouse check, a ghoul can increase a Physical Attribute by 1 dot, up to a maximum of (5 + Blood Potency + any dots in relevant physical Discipline). This lasts for a single dice roll. The ghoul can use this power before or after a roll is made, but before the GM describes the result. This power is generally not usable against NPC ghouls, vampires, and other night-folk, as they are assumed to spend blood or other “supernatural fuel” counter it.

Learnable Disciplines: Ghouls can learn Disciplines, but only physical ones (Celerity, Fortitude, Potence) and whatever Disciplines their current domitor knows.

Starting Disciplines: Ghoul PCs begin play with two Discipline dots. An Embraced ghoul gains an extra Discipline dot upon becoming a vampire. A mortal who is ghouled over the course of play immediately manifests one Discipline dot and can learn more with time.

While on the blood, a ghoul ceases to age. In some cases, the clock even turns back a few years. Many diseases, such as cancer and HIV, also go into remission.

By making 1 Rouse check, a ghoul can reduce the penalties from the Injured Condition by 1 (to a minimum of 0). Unlike vampires, ghouls can still reduce Injured’s penalties through bed rest and medical attention.

Drinking regular vampire blood means most ghouls are blood bound to their domitors. Some domitors may choose not to fully bond their ghouls, but this is uncommon—uncommon enough, in fact, that PCs ghouls have to buy it as a Background.

Independent ghouls, by their very nature, can avoid being fully bound to a single vampire. Living as an independent can be a hard and dangerous existence, though, and means juggling an array of weaker bonds towards a variety of Kindred.

An Embraced ghoul retains any full or partial blood bonds they were under. For this reason, ghouls tend to be regarded as nonviable childer—most princes view sires with blood bound childer as potential threats to their rule. Like anything, though, it still happens.

Players of vampire PCs can purchase ghoul servants through the Pawn and Retainer Backgrounds. They can also hold ghouls through Status in mortal organizations. For example, if your PC has Status in a business they own, you could have some of the employees be ghouls.

Players do not make biweekly Rouse checks to feed their ghouls. That’s extra bookkeeping and assumed to happen in the background.

Rouse checks beyond a ghoul’s biweekly dose are rolled for by the player as normal.

Elder ghouls are ghouls who have outlived their natural lifespans. Although they can command far greater power than younger ghouls, they don’t just need vitae to retain their Disciplines and youth—they literally die without it.

An elder ghoul at Craving 8 takes takes the Injured Condition (-1) after every dice roll or narratively significant interval during a scene as their body rapidly ages. At Injured -6, the ghoul dies from withdrawal-induced old age. Missing doses can rapidly be fatal to elder ghouls, and ages them permanently even if they later get their fix.

• The ghoul no longer takes Disadvantage on rolls to use Disciplines against vampires.
• The ghoul has a maximum Craving of 10 rather than 8. They start “jonesing” at Craving 8 rather than 6.
• The ghoul adds their Blood Potency to dice rolls to resist Disciplines used against them, just like vampires do.
• The ghoul reduces the Rouse cost for Devotions with a lower dot rating than their Blood Potency, just like vampires do. This is an even bigger benefit for ghouls than it is for vampires, since they can’t reduce Craving as easily as vampires can reduce Hunger.

An elder ghoul’s Blood Potency only lasts so long as their domitor’s ultra-potent blood remains in their system. If an elder ghoul reaches Craving 10, or feeds exclusively on weaker blood for a month or longer, their Blood Potency falls to the appropriate level until they get another hit of the “good stuff.”

Permanent Blood Potency: Given time and a constant diet of elder vitae, a ghoul’s blood can thicken and make their Blood Potency score permanent, even if they later subsist on weaker blood. These elder ghouls still lose their powers at Craving 10 and still can’t reach a higher Blood Potency than (domitor’s Blood Potency – 5), no matter how many years they’ve been a ghoul.

For example, a 600-year-old ghoul to a Blood Potency 7 domitor would be Blood Potency 2, so long as they regularly received their master’s vitae, but would become Blood Potency 1 (rather than 0) if forced to subsist upon weaker blood.

It should be noted that very few ghouls survive to such an advanced age. Still, whispers persist of alien ghouls in service to methuselahs with powers to match any younger vampire’s.

PCs who want to be elder ghouls take the Elder Ghoul Flaw: most ghouls don’t risk death when they reach their maximum Craving, so it’s a disadvantage. Elder ghouls to Blood Potency 6+ domitors must buy Blood Potency dots during character creation. Otherwise, the elder ghoul is assumed to have gone without their domitor’s vitae for long enough to be Blood Potency 0.