“Religions are like pills, which must be swallowed whole without chewing.”
Thomas Hobbes
“The U.S. is a very religious country. Separation of church and state is part of our credo, but that is hard to understand since our money says ‘in God we trust’ and every president says ‘God bless America.’”
Madeline Albright
“I’m completely in favor of the separation of church and state. My idea is that these two institutions screw us up enough on their own, so both of them together is certain death.”
George Carlin 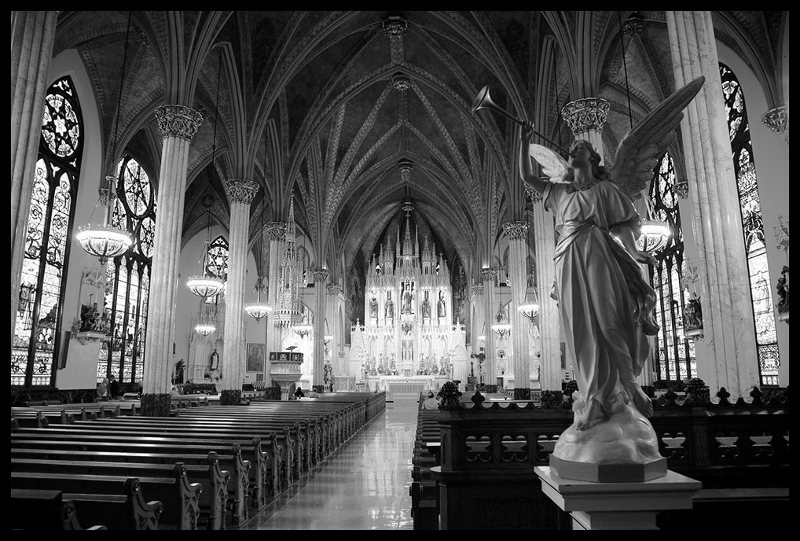 The Church and those associated with it are no strangers to politics and intrigue. This, of course, is something upon which the opportunistic Kindred frequently capitalize. Church influence usually only applies to mainstream denominations, which include: Christianity, Judaism, Buddhism and the Islamic faith. Other religions, such as Paganism, fall under Occult. Contact and Allies affected by Church influence include: ministers, bishops, priests, activists, evangelists, nuns and assistants, as well as attendees.


Born: 1950
Family: The Malveauxes
Status: Catholic Church •••••
Archbishop of the Roman Catholic Archdiocese of New Orleans with tremendous influence within the church, perhaps even above his station. Rumor holds that the archbishop still has a prominent, if unofficial, hand in the family oil company’s operations; certainly, the Malveauxes makes regular and quite sizable donations to the Catholic Church. Less benign rumors hold that the archbishop has his fingers in less savory areas of business and politics as well, including ties to the Mob. Has no children of his own but is heavily involved in the lives of his numerous nieces and nephews, some of whom have also taken up lives of the cloth. Resides in a walled estate in the Garden District with an array of private security guards and servants. Enjoys lavish banquets and has his own staff of private chefs. Extremely controlling and dedicated to the welfare and future of the family, he commonly functions as the family disciplinarian. The most bigoted of the Malveaux brothers, and the closest to their deceased father.


Born: 1985
Family: The Malveauxes
Status: Catholic Church •••
Nephew of Orson Malveaux and son of Matthew Malveaux being groomed to succeed his uncle as archbishop.


Born: 1946
Status: Touro Synagogue •••
Rabbi and hobbyist magician who presides over the reform Touro Synagogue despite his personal Conservative following of the faith. Teaches an underground Kabbalah class to an eclectic group of people, some not even Jewish, of which Emil Kane is a member. He claims to have seen something more in the words of the Zohar than hasn’t been uncovered in many many years. That the secrets he found were only found by his (supposed) direct ancestor, Moses de León, the publisher of the text. He wants this truth to be kept close to those he chooses and trusts. When he will elucidate this truth is up in the air, and as a result, many people who get pulled into the group tend to fall out fairly quickly. Emil hasn’t lost hope just yet.


Pastor of Holy Name of Jesus Catholic Church, Father Edwards has seen the best and worst of the city, the horror of Katrina and the majesty of the city’s rebirth. Through it all he’s maintained his faith, and remains a steadfast advocate of faith and family. What choice does he have? His past is full of tragedy: he came late to the cloth after the death of his wife and unborn child in a senseless and brutal shooting. Caroline Malveaux-Devillers’ priest for much of her time at Tulane, as she chose to forgo the Catholic Center masses in favor of a real church.


Born: 1950
Family: The St. Georges
Retired former social worker, foster mother of six (now grown) children, and now decade-long active volunteer working with the homeless or impoverished at Holy Name of Jesus Catholic Church, Mary is a lifelong Catholic firm in her faith and sound in her principle. She works to take down, store, and organize information on the local homeless and under served for the purpose of tracking aid that the church provides, in addition to overseeing many of the outreach and aid programs, most of which are staffed by local college students. A kindly and exceptionally patient woman, Mary never married, but instead raised half a dozen wards of the state, seeing five of them off to college and successful careers. Nonetheless, she’s haunted by Jason St. George, her one great failure, and wonders how she could have gone so wrong. Her continued service is in part an attempt to make amends for failing the young man. Short and plump, with a head of short iron gray hair, she has a matronly air about her and is fairly discerning in her ability to read people. Hosts four of her six children (the exceptions being Jason and Rebecca) every Sunday night for dinner.


Born: 1953
Family: The Galloways
Minister of a Southern Baptist congregation in the Lower 9th. Grew up and remains friends with Fred Luter, current president of the Southern Baptist Convention. Father of Rhonda Irving, wife of Shawnte Irving.


Born: 1988
Family: The Ardoins
Status: Televangelist show •
Former meth-head who served a few stints in the Orleans Parish Prison for possession, disorderly conduct, and resisting arrest. He then did a nickel at the Farm after lighting a police car on fire in protest of the NOPD arresting his dealer. Angola was less than kind to the middle-class junkie, but his time there brought about a rabid conversion to Evangelical Christianity via a televangelist’s show being regularly broadcast in the Farm’s TV. Following his release, he sought out the Southern televangelist and pledged his life’s service to the fiery preacher. Since then, Bertram has become a largely sober roadie and all-purpose lackey for the televangelist’s lucrative broadcasts and far-reaching ministry. Bertram is the son of a Tulane nurse, Pamela, with whom he is estranged as a result of his drug and legal problems and her belief that the televangelist is a hypocritical sham.


Lapsed Scot-Irish Catholic priest who previously served at Saints Peter and Paul Catholic Church on Burgundy Street and the school and deanery it oversaw. When his parish and church were shut down by the Archdiocese in 2001 (purportedly for financial reasons, but some suggest there were political if nor scandalous causes), Father Sinclair became despondent, and refused to leave his parish, eventually living and ministering with the area’s vagrants and streetwalkers. As time progressed, he came to both resemble and behave like his congregation of bums and addicts. While these developments have earned him the condemnation and threatened excommunication by the archdiocese, they have simultaneously gained him the affection and loyalty of the region’s marginalized and dispossessed, who view him as a “sinners’ priest.”

Born: 1991
Deceased: 2016 (25 years old)
Family: The Flores
Middle daughter of Maxen and Diana Flores. Isabel achieved notoriety in 2009 after a video circulated which depicated her having sex with her father. The video was debunked as fake after several more tapes were released showing her father’s political colleagues engaged in coitus with their own daughters (all of whom looked suspiciously like the same actress), but the damage was done. Isabel left New Orleans in a cloud of shame to attend Liberty University in Virginia. After graduating, she went overseas to do missionary work in South Sudan. She met her premature death there three years later. Her daughter by a Sudanese man was adopted by her mother Diana.


Beautiful and well-regarded up and coming young woman and former rival to Caroline Malveaux-Devillers who shocked the social scene in New Orleans when she declined her admission to Yale and quietly announced she was joining the Ursuline Convent just days before she was to start her freshman year of college. Rumors swirled that her actions were prompted by some exterior motive for a time, but faded as she did from social consciousness. She has been little seen or heard from since, falling off the social radar and away from memory of most, even among her family. Most outside the family now barely remember her as one of Matthew Malveaux’s middle daughters, and even among them few contact her these days, leaving her to her secluded life away from the troubles, responsibilities, and expectations of the modern world.