“It’s all papers and forms, the entire Civil Service is like a fortress made of papers, forms, and red tape.”
Alexander Ostrovsky
“Bureaucracy gives birth to itself and then expects maternity benefits.”
Dale Daunten
“You will never understand bureaucracies until you understand that for bureaucrats procedure is everything and outcomes are nothing.”
Thomas Sowell 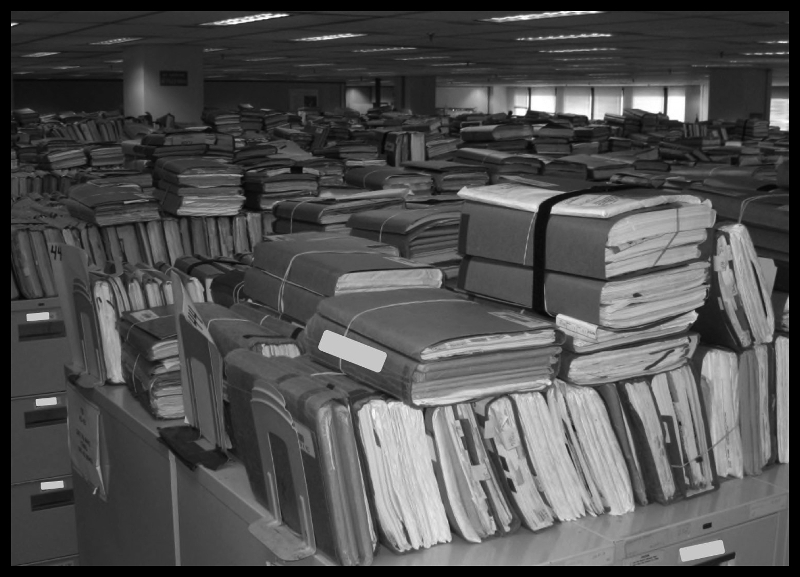 Bureaucracy is the ability to affect the aspects of local government. Bureaucrats can manipulate the rules, red-tape and regulations that are necessary to run a city. Influence can be attained by amassing contacts or allies among the clerks, supervisors, utility workers, road crews, surveyors, other civil servants and even city councilmen and alderman. Bureaucracies in the World of Darkness are vast, sprawling and byzantine beyond compare. Areas of authority frequently overlap and the various functions, bureaus, and authorities form a labyrinth which few can navigate.

Born: 1928
Family: The Mauriers
Status: Parish Clerk •••••
Parish clerk of Orleans Parish. Dried-up octogenarian spinster who claims she is the bastard daughter of William Faulkner. She’s sharp as a whip and with a mind like a steel trap despite her age. She’s a consummate clerk, wielding political power from behind the castles of paperwork. She binges on old bourbon (her family is old money) after every election she oversees, and quotes liberally from her “old man.” She claims she’s named after a character in his book Mosquitoes (or the character is named after her). Likes puzzles and riddles and writes gaudy mystery-romances under a pen name. She’s “decided” that she will live to 90, then retire and die. Likely in that order, she laughs.

Born: 1961
Family: The Marrons
Status: Louisiana Fire Marshals ••••
New Orleans’ district chief fire marshal and husband to Pamela Ardoin. Gossip and the gospel-truth agree that Jerry inherited his position from his uncle, Martin Glass. His uncle served as a NOFD firefighter before an injury forced him to accept a lateral promotion at the fire marshal’s office, where he worked initially as an inspector before climbing the ranks to district chief. During that time, Jerry Junior became an inspector with his sole qualification being his pedigree. Later, when Martin Glass stepped down, Jerry Junior took his place–at least in name. In truth, the current district chief is confounded by NOLA’s prolix bureaucracy, and his understanding of his own district’s role in that web is only a little better. Indeed, Jerry Junior used to simply rely on his uncle, coming to him whenever there was a problem he couldn’t easily solve (which covered most of the district’s operations), and obediently doing whatever his uncle told him to do.
So divesting his authority, Jerry has spent his days on ocean fishing tours, hosting blue-collar neighborhood broils at his heavily expanded Bywater residence, and buying presents for his seven grandkids. Yet, since Katrina, Alzheimer’s disease has been inexorably stealing his uncle’s mind, which has left the current district chief to rely upon increasingly erratic, faulty advice. After such literally demented counsel caused not one, but two front-page fiascos, Jerry has begun to lean upon his secretaries and two district captains to effectively do his job. More than anything, Jerry is afraid his employees and the greater public will learn just how unqualified he is, and in doing so, forever tarnish the reputation of his uncle, whom he idolizes. Consistent with his general obliviousness, though, Jerry doesn’t realize that both of his fears are increasingly coming true.


Born: 1952
Family: The Glasses
Status: Louisiana Fire Marshals •••
Former NOFD firefighter before an injury forced him to accept a lateral promotion at the fire marshal’s office, where he worked initially as an inspector before climbing the ranks to district chief. He retired after Katrina when early-onset Alzheimer’s disease began stealing his mind at only 53 years old.

Born: 1960
Status: Louisiana Fire Marshals ••••
The senior-most fire marshal captain of New Orleans District. Terrance served under Martin Glass, and greatly respected the fellow blue-collar man’s drive and competence. He served faithfully under Glass for a decade, and even vigorously helped the man’s city council campaign, but he became disillusioned and resentful when what he considered was his deserved district chief promotion was nepotistically given to the grossly unqualified Jerry Marron. Initially, Terrance kept his mouth shut and tried to compensate for Jerry’s incompetence, but he changed his tune, hard, once Martin Glass developed dementia. Indeed, Delaune has made it his mission to ruin his boss’ career and profit from the ashes. Although the current chief’s incompetence generally just requires Terrance to do nothing, he has at times taken a more active role by collecting disparaging internal memos and tipping off the media to certain failures.
More recently, Captain Delaune’s corruption has become personal as well as professional, as his growing alliance with the office’s assistant secretary, Paulette Dupuis, become a full-fledged affair. Together, they have embezzled nearly six figures from the district and state of Louisiana. Terrance claims he loves Paulette and just wants to ‘save’ enough for both of them to ‘retire’ together in the Bahamas, but in truth, he finds her disgusting (although the nearly fifty-year-old man doesn’t particularly mind the frequent sex with the younger if larger woman). Time, however, is running out, as both his wife and the city auditors are close to uncovering Terrance’s multiplying sins.

Born: 1968
Status: Louisiana Fire Marshals ••
Fire marshal inspector with a history of questionable judgment calls in shutting down clubs, restaurants, and other business for alleged code violations in the middle of major events. Whispers say he works for the mob as part of a protection racket. Once, very early in its existence, shut down the Corner Club, but spent four years in court against an array of civil suits that left him near-destitute as a result. Works long hours to try and pay rent (his home was among assets seized) and for his son’s leukemia treatments.

Born: 1979
Family: The Montagues
Status: New Orleans Health Department ••
City health inspector who is struggling to make it on her own after splitting from her husband, Brandon Eriks, last summer. Has a three-year-old daughter with him and is fighting a protracted legal battle for sole custody, but often leaves her daughter with her ‘stay at home mom’ sister Kathy. Struggling at work due to what she suspects his harassment by police further up the chain, though she can’t prove it. Although her looks make her frequently hit on, she has no interest in a relationship at this point—not the least of which because she’s afraid that Brandon would kill any other man who touched her.

Born: 1980
Family: The Whites
Status: Louisiana DMV ••
A fifteen-year employee at the New Orleans DMV, Jada White gets about half of its work done by herself. Her line is the only one in the que that seems to move, and it’s not uncommon for her to juggle five or six phone calls along with a face-face interaction at once. Overweight but not obese, she’s an aberration in government work: genuinely cheerful at work and kind to those that interact with her. Her two children, both middle school-aged, attend a charter school. She shares custody with ex-husband, with whom she has a polite, if not warm, relationship. Kept his last name for the kids. Refers to those she interacts with at work as “babe.”

Born: 1952
Family: The Flynns
Status: AT&T ••
Pole climber for AT&T for 26 years who was eligible for retirement in 2015, John is a fiercely blue color working Catholic who wonders where he went so wrong as a parent and refuses to leave his job, lest he be left with nothing. With his son in a drug addict in prison and his daughter a “degenerate homosexual whore,” Michael has fallen into his work, his hobbies and light beers by the dozen to avoid facing the “failure” of his life. Those hobbies include protesting at abortion clinics and attending sporting events. Even his wife Charity rarely seems to interact with him, leaving him to his hobbies.

Born: 1981
Status: Louisiana Fire Marshals ••
Assistant secretary of the Fire Marshal’s District of New Orleans. Daughter of Marcus Dupuis, a former public defender who was disbarred for sleeping with multiple clients. Paulette has worked under both of the Marron district chiefs. Unlike her superior, Paulette is uninterested in preserving her office’s integrity. Instead, she foresees the inevitable fallout of Jerry Junior’s incompetence, and has begun looking for a soft, safe place to land–and has not been above trading favors and assisting Captain Delaune in embezzling district funds. She suspects that Captain Delaune won’t leave his wife as he’s promised Paulette, and so she’s been trying to devise a back-up plan to blackmail him into doing so–or at least taking the fall if their scheme is discovered. She spends her free time at home pampering her miniature greyhound, shopping for plus-sized lingerie, and trawling through real estate advertisements in the Bahamas. Presently, she’s narrowed down her list to the islands of Inagua, San Salvador, Mayaguana, and New Providence; after all, she thinks, a girl can’t be too choosy.

Born: 1970
Status: Louisiana Fire Marshals •
File clerk at the New Orleans branch of the Louisiana Office of the State Fire Marshal Public Safety Services. Molly conducts no inspections herself (and in fact has only a passing understanding of them), but is responsible for helping to schedule building inspections, organizing schedules for the many fire marshals and inspectors, and filing the results of inspections.

Born: 1965
Status: New Orleans Sanitation Department •
Former dentist exposed as a child molester ten years ago who got off on criminal charges twice in five years despite his victims’ waking up mid-assault, but lost his wealth in subsequent civil cases and had his medical license suspended. Now drives a garbage truck for the city and endures semi-regular police harassment. Jessica White claimed her sister was among his victims, though the now-deceased police officer didn’t have any sisters.
Paul briefly collected the trash along Louis Fontaine’s route. The retired detective’s social circles may have included racists, murderers, and drug addicts, but he drew the line at pedophiles. He promptly reached out to Otis K. Wiggons and old police friends who “advised” Paul to switch routes to a different region, as they thought he wasn’t “clean enough to pick up our district’s trash.” Lou has not seen the former dentist since.

Born: 1988
Status: Entergy •
Puerto Rican “lineman” at Entergy, NOLA’s electric and natural gas utility provider. Shares an apartment in Faubourg Marigny with Dr. Alejandra Suarez, a friend made during their mutual time at Loyola (although hers did not end with a degree). Involved in a long-time affair with Father Sinclair.