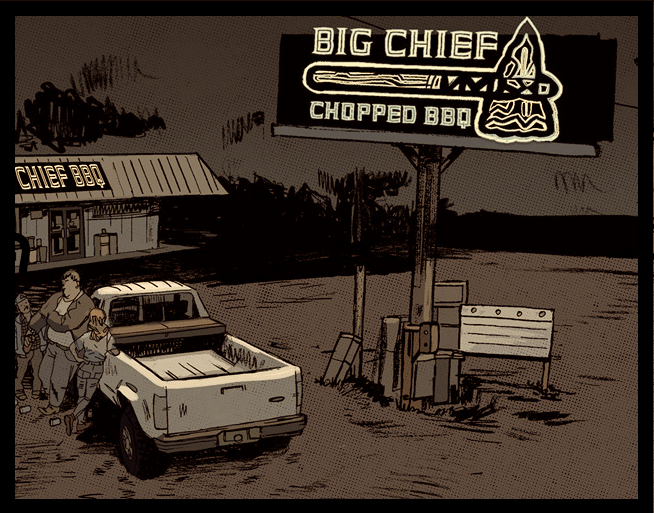 Located along the south-bound side of Route 11, just northeast of Lake Pontchartrain, a sagging line of telephone poles and slash pines frame an informal truck rest-stop and the roadside diner that spawned it: Big Chief Chopped BBQ. Built in 1962, the restaurant has a rust-veined tin roof, sawmill-slat siding painted varying stripes of red, ochre, and yellow, and a pair of buzzing neon signs. This Boggs-owned and -operated establishment is a local favorite, frequented by Rebs tailgaters, fishermen from the Bayou Bonfouca and Eden Island, and countless long-distance truck drivers just leaving or soon-to-be entering the Big Easy.

Inside, the decor is a blend of Dixie Americana, Cajun shabby-chic, and white trash hoarding. Taxidermied possums, muskrats, and woodcocks leer from bric-a-brac-cluttered shelves: the two-dozen or so stuffed critters have been dressed in crudely-fashioned costumes resembling the uniforms of Confederate soldiers and Choctaw braves. Such comical, if creepy sentinels overlook the coffee-stained linoleum floor, window-facing booths, and handbill-plastered counter. An old jukebox sits in a corner, silent except during electric storms when it spontaneously belts out old-time tracks of boogie-woogie and honky-tonk. Finally, there is the eponymous ‘Big Chief’, an eight-foot tall wooden statue of Chief Mushulatubbee -whose crotch has been lewdly re-carved and painted with a bull’s eye to serve as the diner’s dart-board. Other attractions include hookers hunting for truck-driving johns, meth-heads slinging the White Reich’s latest batch of crank, and blackmarket arms dealers operating out of pick-up trucks and eighteen wheelers.

Despite such diversions, most patrons come to the diner for one and only one reason: BBQ. The traditional Cajun boucherie still catches and slaughters wild hogs to concoct most of their parish-lauded pit-smoked and braised dishes such as the Big Chief brisket, Roadkill roast, and Heart-attack on a Stick brochettes. Despite such culinary renown, few patrons outside the Boggs clan know of the Big Chief’s ‘special’ menu where orders of baby-back ribs and blood sausage boudin take on very different flavors.

The current proprietors of the Big Chief are Thelma-Lou and Clyde Tucker Boggs. They are assisted by Thelma’s children and grandchildren and an irregularly rotating roster of loosely related kin.