The courier wove between the klaxon-snarl of rush-hour commuters, pedestrians, and chiming streetcars. She flew past street lamps and neon signs, unlit but soon to awaken. Reaching her destination, she stopped with a swift tug of her bike’s handles and vaulted over its seat with reflexive ease. Around her, the traffic continued, navigating the gnarled confluence of City Park, Canal Street and the Boulevard with a similar vacuity. Above her, the sun sunk wearily, painting the surrounding sea of cemeteries in a lipstick red that faded to a dark bruise in the east. She spared a moment to listen to the last song of her playlist, “Alone Together”, swaying a bit at the slow denouement of Chet Baker’s trumpet. She then secured her bike to a nearby hydrant, and hefted the breadbox-sized parcel. She examined its brown wax-paper wrapping, and checked the delivery’s address.

The courier looked up, and inspected the corresponding structure. It was set in a dilapidated cluster of buildings, a melange of old brick, rusted iron, and cracked plaster. It had the look of a forgotten age that seemed an all-too appropriate neighbor to the grave-marked dead. 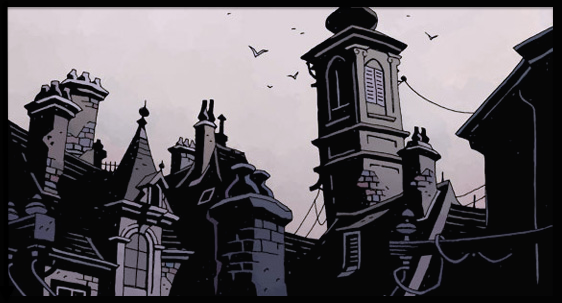 Looking for the entrance, she spotted a paint-chipped door, riddled with fresh graffiti and faded fly-post adverts. Above it, a perantique plaque, shot with patina, depicted an unsleeping eye. Its engraved iris read: Private Investigations & Consultations.

She swung open the black-iron gate with its rust-speckled roses and knocked on the door. It swung open. Peering inside, she saw a sagging staircase, a taped-off lift, and a snoring hobo clutching a cut pay-phone receiver and bundle of smutty magazines. She sighed and scaled the stairs, parcel in hand. Three flights up, she came to a door in slightly better repair. Painted black letters on the door’s bleary glass window read: Louis Fontaine, Private Investigator.

It wasn’t much to look at.

But it wasn’t the ataxophobic sight that struck her first. It was the smell. It smashed into her face with the door’s yawning. The room absolutely stank, smelled over-ripe of old sweat, cheap cigarettes, cheaper booze, and other ineffable, stomach-churning odors. At the rank epicenter, an old, one-armed man sat behind a three-legged roll-top propped up by outdated phonebooks. The brick-faced man wore crumpled, coffee-stained clothes that looked like they hadn’t been washed for days. Weeks, maybe.

“On the cabinet,” the old man said brusquely, never stealing his gaze from a three-year-old print of the Times-Picayune that sprawled on his desk beside an antique typewriter and black corded phone dangling from its receiver.

“W-where?” the courier heard herself stutter as she re-swallowed her rising lunch.

Without glancing, the old man waved his prosthetic hook, and the well-nursed tumbler clutched in its pincers, at one of the flat’s walls. There, gray file cabinets loomed: stoic, rectangular sentinels from a bygone era.

Between these relics and the door was a flotsam maze: the detritus of a long, lonely life. Overflowing trashcans and ashtrays. Empty liquor bottles and greasy take-out boxes. Half-unpacked boxes and second- or more likely fourth-hand chairs and furniture, some of which still bore mildewed post-it notes scribbled with “Free” in black sharpie. A dozen or more shop window mannequins stood against a wall. Old ones, some without arms or hands or heads. Others impaled by knives or riddled with bullet-holes. Stranger bric-a-brac warred for space: a mummified snapping turtle, mugshots taken with dusty polaroids and museum-piece daguerreotypes, and apotropes to various loa, black and red.

The courier wove between this sea of clutter and curios and set the parcel atop the nearest cabinet, between a leering Mardi Gras teddy bear and a calf-leathered tome entitled Forensic Application of Anthropometry, Alphonse Bertillon, 1874. Meanwhile, the old man continued to pour over his time-sallowed newspaper, seemingly paying her no heed.

Eager to be gone, and grateful the delivery did not require a signature, she retraced her steps and headed for the exit. She nudged the door closed with her shoe, not wanting to touch anything else from the fetid flat. She forcefully exhaled, only then realizing that she had been holding her breath. She closed her eyes, as if to banish the sight and stink and whispered, “Sweet Jesus, it’s like someone died in there.”

A voice, equally quiet, but eerily disquieting, replied, “Jesus be a bit sweeter if t’was only one.”

The courier jumped, thinking that the old man had somehow heard her—but quickly realized that the voice was coming from the stairwell, not the office. Also, it was too effeminate. And too close.

She opened her eyes—and then immediately wished she hadn’t.

Standing, no, floating, in front of her was a woman in her mid-thirties, dressed in a rose-patterned sundress, pearl necklace, and kitten-heeled pumps. Her hair was expensively coifed, and her posture was demure, if dignified. Except for her neck—or what remained of it. Her neck had been ripped open, and almost off, causing her head to sickly dangle to one side. Colorless blood seeped from her torn throat—which was also colorless as was the rest of her. No, not just colorless, but transparent. Ghostly.

The courier stood, silent with shock, paralyzed with fear.

The spectral woman just smiled, then spoke in painfully polite tone, “Pardon me, darlin’, but would ya mind?” She motioned towards the door with a perfectly manicured, incorporeal finger, “I have a six o’clock appointment with Mr. Fontaine, and ma mama told me to never keep a good man waitin’.”

The courier’s reply was a scream. She bolted down the stairs, away from 5666 Canal St and all its horrors.