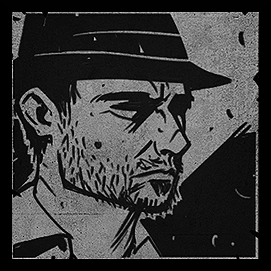 A Sicilian bantamweight. Olive skin, spade-black hair. Slim as the toothpick he flicks absentmindedly between his teeth, but toned and taut as a racetrack greyhound. Three-day old facial hair that smells of dried sweat and drier cologne. A face that might be called ruggedly handsome, if not for its diminutiveness and half-dozen moles.

He drives a ’64 Chevelle. Bubble-gum pink coat. Powder-white soft-top. A radio incapable of playing anything but Rat-Pack classics. He refers to the car as “Lottie B.” On good days, he says the “B” stands for “Beauregard.”

Vinny lost his first race at birth, beaten by twelve seconds by his identical twin, “Lucky” Luciano. As part of the Cardona family, Vinny and his brother inherited a seven-generation connection to the New Orleans Mafia. Their childhood included serving as lookouts, errand boys, and minor vandals for the local capo. Once they graduated high school, however, their father, Marcello “Boxcars”, encouraged his sons to get out of the family business. Luciano first earned a bachelors in Accounting from Tulane, then a juris doctorate from Loyola; one year later, he passed both his bar and CPA exams. Vinny, meanwhile, joined the Coast Guard, received a bad conduct discharge (he and some other seamen broke into their C.O.’s liquor cabinet and threw a party on an absconded pleasure yacht), and became a pseudo-professional bantamweight boxer, part-time jockey, part-time pawnshop con, and full-time gambler.

Late one summer, at the tailspin of a particularly bad losing streak, Vinny accused a rival jockey of cheating. When the man tried to teach Vinny some “respect” with a taser in the racino’s bathroom, Vinny dropped him with a single overcut, kicked him into a three-week coma, and hung a broken toilet lid around his neck for good measure. Although multiple witnesses confirmed that the other jockey initiated the violence, and with a weapon no less, Vinny’s racetrack sponsors dropped him and Vinny spent the night in lockup. It was a bad way to end a bad day, but Vinny thought he could sleep it off and awaken to a brighter, better day.

Hurricane Katrina woke him, both literally and figuratively. When the storm broke the levees in the morning, Vinny and his fellow cellmates were abandoned by the scared-witless guards. For two and a half days, they were trapped, forced to wade in their own sewage as the floodwaters reached their chests. Eventually, they were found and freed by a search and rescue team, led by a humble but heroic meter maid, one Ida “Trunk Face” DeGruy.

The ignominious brush with death, and involuntary time spent wallowing in his own literal filth, prompted Vinny to re-evaluate his life. He gave up drinking and hawking fenced and counterfeit bric-a-brac at his cousin’s pawnshop, tried (but failed) to curtail his gambling, and enrolled, much to his family’s shock, in the NOPD academy. There, he performed remarkably well, especially given his stature. In time, his background in fencing and counterfeiting earned him the respect and attention of the department’s Criminal Investigation Division, particularly its Property Crimes Section. A few years later, he was promoted to detective and sequentially assigned to the Pawnshop, Auto Theft, and White Collar/Forgery Units, settling into the latter with gusto.

As a current member of the White Collar/Forgery Unit, Vinny spends his time dealing with fraud, bribery, Ponzi schemes, money laundering, identity theft, and forgery. In short, he plays cat and mouse with the “phonies of the Big Sleazy.” Unbeknownst to his colleagues, Vinny often receives help from his barrister-accountant twin, particularly when the culprit is a rival of the Mafia, for whom Luciano allegedly works. When a case implicates his family, immediate or extended, Vinny abstains, claiming a conflict of interest. Walking this thin line between loyalty to the department and betrayal of his family, Vinny is simultaneously respected, trusted, disparaged, and suspected by both his fellow officers and the “Family.”

Most of the time, Vinny doesn’t mind. For him, the job isn’t about respect or acceptance; it’s about reality. For him, it’s about the thrill of exposing the fakes, the false, and the facades. Consequentially, busting a good conman or counterfeiter is basically an orgasmic experience. And if there’s one forger that gives Vinny the biggest hard-on, it’s the Julia Street Panthère. Said to be an art forger and thief of preternatural, if not downright impossible, skill, the Panthère is considered an apocryphal figure, if not ludicrous urban legend, by most of Vinny’s associates. Undeterred by water cooler jibes, Vinny is completely convinced that the Panthère is not only real, but fated to fall by his hands.

Off the clock, Vinny burns the day, and night, at the NOLA’s premier racino, the Fair Grounds. Now off the sauce, and with the prestige of a badge, Vinny maintains good relations with the Fair Grounds’ staff, even if his credit and luck are lamentable. Although he piddles some time pulling slots or playing online poker, his true obsession is betting on the Grounds’ greyhound and thoroughbred races, from the ungraded Bayou Handicap to the prestigious Louisiana Derby.

Between his job, his gambling addiction, and his fickle car, Vinny has little time left for dating or other hobbies. Occasionally, he swings by his old boxing haunts, but only to practice and shake out the rust in his joints. He eats dinner with his extended family every Sunday, but otherwise avoids them, particularly his grandmother who heckles him about missing mass and his aunts who keep trying to set him up with some twice-removed cousin or whatnot.

It’s not a particularly happy life, Vinny tells himself, but it sure beats swimming in your own shit. 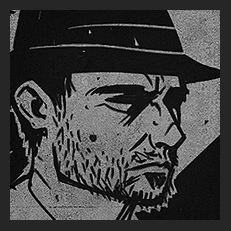