”We say that slavery has vanished from European civilization, but this is not true. Slavery still exists, but now it applies only to women and its name is prostitution.”
Victor Hugo
“The profession of a prostitute is… the ever-new embodiment of the old fable of the sale of the soul to the Devil. The tempter offers wealth, comfort, excitement, but in return the victim must sell her soul, nor does the other party forget to exact his due…”
William Booth
“Do not desire her beauty in your heart, nor let her capture you with her eyelids. For on account of a harlot one is reduced to a loaf of bread, and an adulteress hunts for the precious life. Can a man take fire in his bosom and his clothes not be burned?”
Proverbs 6:25-27 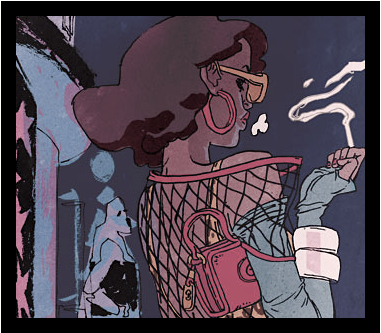 The night wears Shanice “Lapcat” Jeansonne like a faux diamond: a glittering, gaudy kind of gorgeous that’s almost as good as the real thing. The Rampart Street fille de joie has mocha skin, pert plump curves, and red-ripe lips just begging for you–assuming you have the cash. Each night, she dons the carnal costume of the streetwalker: leopard-print leotards, fish-nets, hip-slung skirts barely wider than a belt, and lordosis-pumping heels that cheaply but all-too effectively promise tawdry, dirty pleasures. Yet, behind this seductive veneer are the less explicit wages of sin: long-sleeve gloves conceal scores of track marks, glossy thongs hide venereal disease, and heavy mascara obscures an existentially vacuous gaze filled with boredom, disgust, and self-loathing.

The Owner of the following named and valuable Slaves, being on the eve of departure for Europe, will cause the same to offered for sale… on Saturday, May 16, at Twelve o’Clock…

1. SARAH, a mulatress, aged 45 years, a good cook and accustomed to housework in general, is an excellent and faithful nurse for sick persons, and in every respect a first rate character.

2. DENNIS, her son, a mulatto, aged 24 years, a first rate cook and steward for a vessel… is strictly honest, temperate, and a first rate subject.

‪So began the Jeansonne family’s formal introduction to New Orleans. While Sarah was promptly shipped off to France never to be seen again, Dennis was bought by one Lawrence Shepard to service his newly fashioned paddle steamer as a cook. Over the next two decades, their two men’s lives became further ensnared as Lawrence used Dennis’ slave-bred children as blood-sport pugilists as the gambling centerpiece of his ‘gentlemanly’ steamboat tours along the Mississippi.

Although Emancipation and Reconstruction shattered such morally bankrupt if lucrative practices, the ‘liberated’ Jeansonne’s still suffered under a de facto form of economic slavery, and many soon found themselves crawling back to the steady, if skinflint wages promised by the Shepards. Over the next forty years, the Jeansonne’s and others like them toiled brutally in the Shepards’ coal yards, supplying fuel for riparian, oceanic, and railway travel one backbreaking shovel at a time, while the Shepards and their fellow Redeemers and Bourbon Democrats became fat with wealth and power and used both to first insidiously, then brazenly flay Reconstruction’s progressive statutes an usher in the infamous Jim Crow era.

During the ugly end of that uglier era, Austin Shepard (the third great-grandson of Lawrence Shepard) was Embraced by Pierpont McGinn, an event which made the lives of the Shepard’s domestic servants all the more hellish–particularly for Pearlina Jeansonne, Austin’s personal house maid and oft-whipping girl. Forced to witness and personally endure many of Austin’s vampiric depravities, Pearlina repeatedly found her mind wiped clean like the floors she scrubbed, leaving disturbing black spots in her memory that quickly became haunted by phantom recollections of inhuman atrocities. Eventually, the trauma, both physical and mental, became too much, an after fraying for so long, her sanity finally and violently snapped.

Mistaking her husband’s nighttime overtures as one of Austin’s bloody ravishings, Pearlina stabbed her husband to death with a butcher knife she’s been hidden under her pillow. Due to the Jeansonne’s race and poverty and the bigoted sociopolitical climate, the intra-familial murder drew little media attention–even when the now-psychotic Pearlina blamed the murder on the “White Devil”. Instead, Pearlina was summarily arrested and sentenced to serve a life-term in the Old Louisiana Women’s Asylum for the Criminally Insane in Jackson, Louisiana. After antipsychotics and electroconvulsive shock therapy failed to measurably reduce Pearlina’s ‘delusions’, a full pre-frontal lobe lobotomy was conducted.

Yet, unbeknownst to the now near-vegetable Pearlina or her ‘caretakers’, the house maid turned psychotic killer was pregnant. Eight months later, Shanice Jeansonne was born in the asylum, and there she remained for the first decade of her life, raised as an experimental test subject by the resident psychiatrist and abused by staff possessed by more visceral lusts. Eventually, her plight was discovered by a crusading civil rights activist concerned about inhumane conditions at the asylum. Although Shanice’s childhood tormentors were never convicted, she was rescued and brought back to New Orleans.

There, she was placed in the care of the Somascan Fathers and Brothers of St. Jerome, who ran a Catholic foster home for otherwise unwanted black children born during the crack epidemic of the ’80s. Under the Somascans’ ecclesiastical and academic tutelage, Shanice (who was given her Catholic baptismal name of Salomea) was introduced to spiritualism, which provided a pseudo-comforting explanation for her ‘visions’ of “white devils” torturing her. From her orphaned peers, she gained a more secular but no less valuable education. Although far from perfect, Shanice’s time with the Somascan Fathers was a time of comparative peace, even happiness. But such joys were not to last.

The White Devil found her. He hadn’t been hunting for her specifically, but he and his trusted servants had been hunting. A true blue blood, Austin Shepard’s possessed a very particular palate: only those descended from his family’s slaves could satiate his sanguineous thirst. Consequently, Austin’s ghouls were always on the lookout for new ‘candidates’ who had the necessary genealogy to join their domitor’s herd. Due to Shanice’s distant, distinct birth and upbringing, she had evaded Austin’s attention for nearly sixteen years, but eventually, his servants found her.

They presented themselves as representatives of a charity foundation backed by the Shepards. They claimed they wanted to make a donation to the orphanage, and as a further show of good faith and partnership, stated that the Shepards wished to adopt one of the Somascans’ wards: Shanice Jeansonne. Shanice, however, saw through their too-wide smiles and too-hungry eyes. Her ‘angels’ warned her. She tried to warn her Catholic guardians. She begged and pleaded, but they doubted or shamefacedly demurred. After all, the Shepards were powerful, respectable, and rich. And their orphanage needed the money. Badly.

So Shanice fled. It was difficult, but her ‘visions’ guided her. Although Austin’s ghouls, NOPD, and the Somascans searched for her, Shanice evaded them. After all, the Crescent City is vast, and a missing black girl was just another needle in the needle-stack. Austin was enraged, and in a pique of spiteful vengeance, he first dominated a Somascan father into embezzling donations from the cash-strapped institution and then guided a media storm that ultimately led to the orphanage’s bankruptcy and several of its priests being arrested and/or excommunicated.

Meanwhile, Shanice fell into the cracks of New Orleans’ ghettos. Although this helped her evade the NOPD (who eventually called off their half-hearted search) and crucially stymied the more persistent investigations of Austin’s ghouls, her new ‘home’ had its costs. Young, homeless, penniless, and without family or friends, she found her quickly seized as property of a local cut-krewe gang and forced into prostitution. Abused physically, sexually, and chemically with all variety of drugs, Shanice fell into a strange numbness that seemed to equally drown out both angelic and diabolic voices and visions. Years slipped by in that dissociative fugue, the faces of her tricks and pimps blurring together like her heroin-slurred speech.

Katrina disturbed Shanice’s dissociative self-destruction, as it interrupted both her stream of customers and steady (enough) drug supply. Abandoned to the throes of hard, ugly withdrawal, Shanice was amongst those left to rot in the Superdome without appropriate food and water. She tried propositioning her peers for drugs, water, or food (but mostly drugs), but there was simply too much demand and too little supply. Desperate, she forcibly, violently tried propositioning one of the FEMA workers, which lead to her being arrested and locked up in a half-flooded cell. Painfully sober, Shanice cursed God, His angels, and all of Hell’s devils.

Only one answered. Shanice’s arrest reawakened a long-dormant search by the NOPD-connected Shepards. With so many of Austin’s ghouls and vessels displaced by the hurricane, the ravenous neonate personally went out into the storm to ‘recapture his property’. The Ventrue never returned home. Perhaps, thought Shanice after that harrowing night, God really was listening and watching…

Notwithstanding the seemingly providential answer to her prayers, Shanice soon back into her old habits as the floodwaters receded and NOLA’s evacuees began trickling back. After all, a girl has to eat, and she had few other contacts or opportunities in the Katrina-devastated city. Surveying the wreckage, both physical and emotional, she planned to forsake the city that had caused her and her family so much pain–just as soon as she saved up enough for a bus ticket and maybe first month’s rent.

Yet, before she could follow that plan, another devil appeared–and this one came with no heavenly warning. Mary Allen, a Malkavian neonate recently arrived from Houston, approached the then twenty-one year old streetwalker and asked her: “Do you believe that God is watching us?”

No stranger to bizarre pick-up lines, Shanice nodded to the odd, yet enticing woman, then added, “But He ain’t payin’ yo tab or mine, honey.”

Mary stepped closely, her movements mesmerizing like a perfumed, painted cobra. “That’s right, little lapcat, we’re paying His, but that don’t mean we ain’t gonna put on a good show for Him.”

Three nights later, Shanice emerged as Mary’s newest convert, a ghoul addicted to her domitor’s deviant faith as well as inhuman blood. As a long-time streetwalker, Shanice in turn helped Mary navigate the mortal under-currents of the Big Easy.

Eleven years later, the now acclimated Sanctified neonate has less need of Shanice, but still keeps the prostitute around as a convenient errand girl and sometime vessel. When not occupied by such responsibilities, Shanice works her favorite corners near her domitor’s domain in Rampart Street, which she considers a significant step up from her time hooking in the eighth and ninth wards. After all, Rampart Street is part of the grand French Quarter, even if it’s the gutter that catches the worst of Bourbon Street’s sleaze. Indeed, Shanice’s territory and profession provide her with the perfect opportunity to serve both kine and Kindred hoping to cross, or at least brush up against, the color and/or class line. So long as they pay, Shanice doesn’t care. Ultimately, Shanice has come to see her new life as a natural continuation from her former: Mary is just another pimp who owns her body and its profits, vitae is just another drug that dulls the existential pain, and devils still run the city while God keeps watching for the final curtain call. 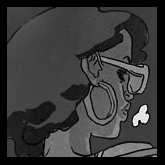