“The police are the public face of government corruption.”
Steven Magee 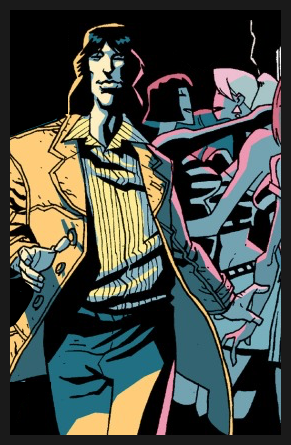 Cash Money Mouton resembles a beanpole that decided to grow limbs. His narrow head is only slightly widened by his black sideburns and ‘70s style coiffure. His puffy lips are pressed into a permanent smile, as if life is a joke whose punchline he alone knows. He smells of deodorant, hair tonic, tabasco sauce, and contagious sleaze that gives his tan skin an almost iridescent sheen. Cash Money Mouton claims he takes the “plain” out of plainsclothes detective, but his outfits usually consist of ballooning silk leisure shirts, long leather jackets, bell-bottom dress slacks, and crocodile wingtips. Without his wealth, the self-appointed Casanova would have a hard time with the ladies (and men if the rumors are true). Fortunately for Cash Money Mouton though, he has, as he is wont to say, the “cash to get the gash.”

His surname is French, but he’s a redbone from peckerwood Louisiana. He used to sell fire, accident, and terminal life insurance across Louisiana and Mississippi, going door to door in both urban and rural slums, where he was infamous for both his sweaty enthusiasm and his carnival sales rhetoric. He would pull clutches of papers and brochures from a vinyl briefcase, his face bursting with sincerity, tapping his seated listener, usually the man of the house on the kneecap, saying: “You run your lawnmower over your foot and chop your toes off? I’ll give ya twelve-hundred CASH MONEY, boy. You stick your hand in your skill-saw? I’ll pay ya five hundred, that’s CASH MONEY, for every finger ya cut off. Splash muriatic acid in your eyes and go blind? I’m talking FIVE THOUSAND BANANAS CASH MONEY, boy.”

Cash Money’s career, however, took a drastic turn back in 2006 when his uncle, Delron Mouton, became commander of the NOPD’s 8th District which includes the French Quarter, CBD, Warehouse District, and Marigny Triangle. With naked nepotism, Cash Money swiftly became not only a cop, but a plainclothes detective. Since then, Det. Mouton runs the French Quarter as a racketeer who only thinly pretends to be a police officer. “Dirty" doesn’t even come close to describing his police work, nor does “pad” adequately describe his financial “understandings” with the both New Orleans Mob and Dixie Mafia. For example, when a local Catholic priest began to make a public fuss about the Mob’s porn and sex trade operations, Cash Money confronted the priest in a public bathroom, smashed his own head into a mirror, and then accused and arrested the priest for allegedly assaulting a police officer after failing to sexually proposition him. Frankly, if there are moral depths to which Cash Money will not descend, he has not found them—but not for a lack of trying.

Due to his connections and numerous cons, Cash Money is, fittingly for his name, loaded. He owns a night club, several drive-by daiquiri shops, a bail bonds office, five check-cashing businesses, and two strip clubs in the Vieux Carré. Additionally, he acts as a last chance loan shark to the same crackheads, dope slingers, hookers, and other low-lives he squeezes and swindles. When dealing with higher-class marks, Cash Money displays more deference and diplomacy, but the same lack of scruples. Rumors has it he helped fund the campaigns of NOPD Superintendent Bernard Drouillard, Mayor Martin Borges, and two city councilpeople and fronted the legal fees for several class action suits for poverty-stricken victims of toxic dumping and oil spills. Yet, no matter where, to whom, or how much he gives, Cash Money Mouton is always undoubtedly on the take.

“A mobster with a badge.”
—Caroline Malveaux-Devillers

“I should call Mouton more often. Every time we meet in person I wonder if the asshole’s hair is as flammable as it looks.”
—Emmett Delacroix

“Detective Mouton makes slugs seem dry as a drunk in twelve-week rehab, and is on more pads than most Ninth Ward prostitutes. But he’s not drinking any lick’s juice. Not last I checked. You don’t need poison to make a dirty rat stink.”
—Louis Fontaine