“I don’t have any regrets, really. The last person I hurt deserved it.”
—René Baristheaut before his execution

“He didn’t just torture me—to death. He didn’t just murder me. He didn’t just murder my brother and mind-rape my best friend. He destroyed my life. Destroyed my future. Took everything that I had from me and damned me. And he didn’t even have the decency to do it properly. There may come a night I can forgive him, that I can appreciate what I am and the possibilities open to me because of what he did. It’s not tonight. I hope he’s enjoying his stay in hell.”
—Caroline Malveaux-Devillers (on the record) 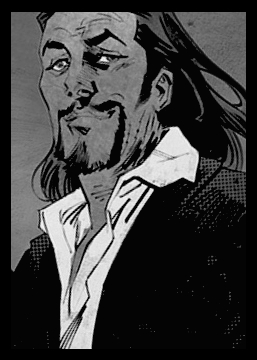 René is a lean man of slightly taller than average height. Not exceptionally muscled. No excess body fat, though. Lean and languid. Ink tattoos, their patterns indistinct in the dark, coil up his arms like incestuously knotted snakes. His face is long and high-cheekboned. It’s faded to a healthy tan, yet a century of undeath has simultaneously bleached it pale and left it seemingly neither alive nor dead—the struggle of Man and Beast writ across the contours of his face. Wildness dances through his eyes. It’s a mixture of cruelty, amusement, lust, madness, bitterness, and melancholy. His crooked smirk promises equal parts mirth and mockery, gallantry and monstrosity.

As most of the masked city well knows, however, René’s grave at St. Louis Cemetery sits empty.

Although Caroline never discovered the particulars of René’s Embrace, she did learn who made him one of the Kindred: the former Ventrue sheriff of New Orleans, Robert Bastien.

True to Savoy’s words, René was not at peace with what he’d become. He joined a krewe of fledgling who were particularly guilt-struck and traumatized by their Embraces. This sorry coterie dubbed itself Sol’s Grief and included Rocco Agnello, Father Malveaux (not yet a priest), Harlequin, and Pablo Gallegro. These neonates were mostly written off by their sires, who considered them too damaged, sentimental, and attached to human morality to ever become proper wolves of God under the Sanctified.

There was one exception, though: Robert Bastien. René’s sire believed the krewe had potential and took them under his wing. Time has proven Bastien’s judgment to be more discerning than his peers believed: the membership of Sol’s Grief now reads as a who’s who of contemporary leaders among the Sanctified. While Gallegro never went far in the Church Eternal before his disappearance in the ‘70s, his krewemates all went on to achieve great things by the present era: Harlequin founded the Krewe of Janus and joined the harpies, Malveaux became the Lancea et Sanctum’s bishop, and Rocco the long-serving hound among the Guard de Ville. René, too, initially seemed to have potential.

In 2015, René returned to New Orleans exactly one hundred years after his original departure.

René found his doom in 2015 at the hands of Sheriff Donovan, who delivered his torpid body to the prince for the alleged crime of Embracing an illicit childe.

Unknown to most Kindred, the principal architects of René’s fall were his ‘childe’ Caroline Malveaux-Devillers and Louis Fontaine, the latter of whom defeated René in personal combat. Owing to Caroline’s poor relationship with the sheriff, however, he took the credit for the ex-hound’s defeat.

René was executed before the city at the Trial of John Harley Matheson for his violations of the Traditions.

René had been absent from New Orleans for a hundred years by the time of his return to the city. He is believed not to have held any domain of his own.

René’s faithful ghoul, Kelford Grant, was a veteran of the 1909 Second Occupation of Cuba and served his domitor in a variety of roles for a century. Kelford claimed to Caroline that he was the only ghoul René kept for any appreciable length of time.

René quickly established a place for himself in Antoine Savoy’s court during his brief return to New Orleans. The French Quarter recognized the century-old ex-hound’s value and it’s probable that he could have climbed further still in Savoy’s graces if he hadn’t been caught and executed by the prince. (Bourbon Sanctified Status ••)

René’s nearly score years in service to the Guard de Ville were remembered by the city’s older Kindred. Still, he’d been absent from New Orleans for a century, and his standing was not what it could have been. (Camarilla Status •)

René’s early service to Vidal and his sire was likewise remembered by the city’s Ventrue. His Embrace of an illicit childe did much to tarnish this dignitas, but he met his final death calmly and in a manner worthy of his Blood—in marked contrast to the defiant last words of his clanmate George Vernon Smith. (Ventrue Status •)

René was childe to Robert Bastien, the previous sheriff of New Orleans from 1815—1915. He met his final death at the hands of hunters exactly one hundred years after assuming his office.

Bastien was the childe of Lothar Constantine, the first of the Lancea et Sanctum’s bishops in New Orleans, and a former member of the city’s Gerousia and Cabildo. Constantine perished at the claws of Loup-Garoux shortly after the Civil War, sacrificing himself to buy time for his descendants Marcel and Jereaux Guilbeau to escape.

Constantine was childe to Dominic de Valois-Burgundy, an orator, diplomat, and philosopher of no small renown. He has not been heard from since the French Revolution and is presumed to have been destroyed in that conflict.

Dominic was the childe of Gaius Pedius Marcellus, a Roman tribune Embraced during the Punic Wars. Marcellus was a patron of the Carolingian Renaissance and an even more revered philosopher than his childe who did much preserve the Roman Camarilla’s history and customs following its collapse. He has not been seen since the Anarch Revolt and is believed to have met final death in that conflict.

Marcellus was the childe of Alexander, the long-time prince of Paris, founder of the Grand Court, patron of Charlemagne, and architect of the ties between the Ventrue and Toreador clans. He was deposed as prince during the 13th century, went into exile, and subsequently destroyed in battle against the Mongol Gangrel Qarakh. Some unsubstantiated stories claim he was the famed Macedonian conqueror of the same name.

Alexander was a childe of Ventrue. The Kingship Clan believes their founder was destroyed millennia ago, making them the only clan free of an Antediluvian’s manipulations. 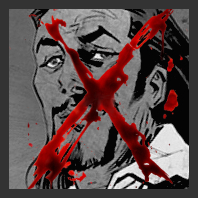