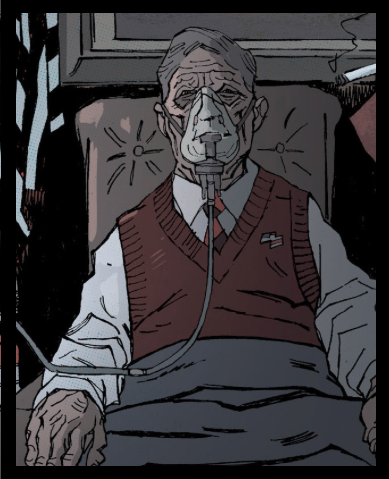 The president of St. Tammany parish is an infirm octogenarian whose weathered, once-handsome face is obscured by his rubber respirator. His once-dark hair has grayed into thin strands combed over his lop-sided skull, while his habitual indoor convalescence has bleached his Cajun-tan skin to the color of liver-spotted, wrinkle-creased parchment. When pried from his gas-mask, his maimed voice is a gasping, toothless whisper, punctuated by gnarled hand-gestures. When not glazed over with the dull sheen of Laotian poppies, his dark-eyed gaze pierces with the intelligent, unforgiving edge of sharp-cut obsidian.

Réginald A. Delahoussaye was born in the empty belly of the Great Depression, in an era when the town of Pearl River was still a backwater logger’s camp called Halloo. His father, Crépin, belonged to a long-line of nigh-indigent, Cajun log-riders who had originally settled the area in the mid-19th century. His family’s indigence, however, took a sharp turn for the better when his father started smuggling riparian moonshine shipments rather than breaking up log-jams. The swill had its cost though as his father became a violent, abusive, and philandering drunk who drove Réginald’s mother to drown herself in a manner akin to a hillbilly Ophelia. Réginald’s father subsequently took up with an equally alcoholic, abusive train-serving prostitute. Meanwhile, Réginald’s older brother and uncle got busted by Volstead Act agents and spent three years working levee gangs, and his sister went blind from sampling too much turpentine-laced hooch.

By the time prohibition ended, the Delahoussayes were decimated and once-again impoverished, but Réginald had skimmed enough of his father’s ill-gotten profits to pay his way into the Carolinian military college, the Citadel. There, he trained to become an officer in the Air Force, intent on giving the “yeller-japs a taste of their own godless medicine,” but WWII ended before he could join the fray. Indeed, he wept openly when he heard about the bombing of Hiroshima and Nagasaki—but only because he wanted the pleasure of personally dropping the nukes. Nonetheless, he partly made up for that slighted dream during the Korean War, where he served as an Air Force officer leading long-range bombing raids from Boeing B-29 Superfortresses. His real hey-day, however, happened after the Gulf of Tonkin Resolution when he led so many napalm runs in Laos, Thailand, and Cambodia as well as Vietnam that he became known as “Santa Nape” for all the village-burning presents he delivered. Moreover, Réginald soon followed in his father’s footsteps by joining Air America and piloting black-op shipments of opium and heroin from Hmong druglords to Laotian warlords.

After such decorated if morally dubious service, the retired Air Force captain returned to his Louisianan hometown. There, he traded his Saigon whores for an equally unblushing bride by the name of Lucile “Buttermouth” Boggs. He sold the majority of his skimmed Laotian drugs and used the profits to invest in a number of small-time oil plugs across the state. Most turned out to be dusters, but two hit black gold, quickly making Réginald one of the richest men in St. Tammany parish. He in turn used that money to buy political influence, including the mayorship of Pearl River and later a seat on the parish council.

A decade later, though, Réginald’s fortunes nosedived when his wells dried up and his prospects became a string of redline busts. So imperiled, Réginald returned to what had twice previously made his family rich: smuggling drugs. This time, though, Réginald took advantage of his military and CIA connections to fly shipments of cocaine, guns, and money in what eventually became known as the Iran-Contra affair. It was during these missions that Réginald became involved with the then-not-yet Embraced Nicaraguan ghoul, Isabelica Calero-Pisanob. Indeed, Réginald flew the plane that took the Aztec-descended necromancer to her sire. In payment for such services, the aged pilot, politician, and oil plutocrat obtained enough money to rebuild his drilling operations and reestablish his socio-political prestige.

But Réginald got greedy—too greedy. He tried to blackmail both Isabelica and Cletus, and the Giovannini responded with typical macabre retaliation. Specifically, Sugarbelle ghouled the old man by forcing him to repeatedly drink vitae-laced Sani-Flush that dissolved most of his teeth, esophageal lining, and larynx. As a result of that debilitating Proxy Kiss, Réginald has become dependent upon a respiration mask to administer his life-sustaining oxygen and pain-managing morphine. His maimed vocal chords also left him reliant upon his wife to relay his verbal wishes to others—a task she does all-too willingly, but not always faithfully.

Despite these disabilities, Réginald’s political star only rose since his ghouling. With the Giovannini’s backing, he was not only re-elected as Pearl River’s mayor, but he also won the parish presidency with a landslide majority that has persisted through three terms. As president of St. Tammany parish, Réginald has steered both mayoral, parish, and state politics in ways that favor his undead masters—and himself, of course. Otherwise, the nigh-invalid spends his time in bitter, opium-fueled, oxygen-deprived naps where he dreams of being young, hale, and at the cockpit of a bomber filled with nuclear warheads. Whether snared by such narcotic, narcissistic daydreams or occupied by more official machinations, President Delahoussaye largely abstains from traveling to the parish capital of Covington. Instead, he can be found at his meticulously restored antebellum home along the Pearl River.

The de facto parish council headquarters is built of weathered, white-painted brick with a wide-columned porch, a second-floor veranda that wraps all the way around the house, ventilated green window shutters, twin brick chimneys at the house’s wings, and scrolled ironwork taken from historical buildings in New Orleans’ French Quarter. The long driveway that leads from the road to the house is covered with a canopy of moss-hung live oaks in mimicry of the Boggs’ manse. Unlike the Slidell-situated patriarch, Réginald isn’t one to waste land-space on the baroque, as nearly all the property in front of the parish president’s house, even the area down by the river, where slave quarters once stood, are leased to black tenants who plant sugarcane on it, making the Delahoussaye manor look like it floats upon a sea of seasonal tides of green, purple, and gold broken by tin-roofed, plywood shacks. The little remaining lawn is filled with Saint Augustine grass that becomes as wet and thick as a sponge with morning dew. Behind the house, a brick retaining wall, lined with planted strawberries and rattlesnake melons slopes down to the water’s edge, where nutria and raccoon tracks crisscross the impressions of egrets and herons. Further along the riparian mudflats, cypress planks lead to a boathouse and docks large enough to host a fleet of riverboat casinos. The mechanical heart-murmur of nearby oil drills competes with the more proximal whine of mosquitoes. Both sounds echo the urgent, insatiable thirst that curses the house and its half-damned occupants.

Ironically, despite the truck loads of money dumped into restoring the above abode he purchased after hitting his first oil plug, Réginald grew up in an Acadian farmhouse that was over one hundred and fifty years old, a beautiful piece of hand-hewn, notched, and pegged cypress architecture that members of the Pearlville Historical Preservationist Society openly wept over when Réginald hired a group of half-drunk black-men out of a ramshackle back-road nightclub, gave them crowbars and axes, and calmly smoked a cigar and sipped from a glass of cold duck from on top of a fence rail as they ripped the old Delahoussaye home into a pile of boards that he later sold for two hundred dollars to a vintage outhouse maker. 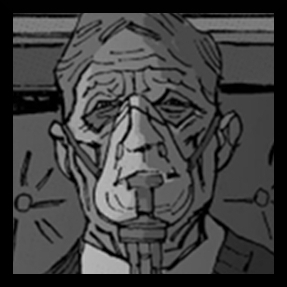