“The matter lies before the eyes of all; everybody sees it, touches it, loves it, but knows it not. It is glorious and vile, precious and of small account, and is found everywhere… But, to be brief, our Matter has as many names as there are things in this world; that is why the foolish know it not.”
—The Golden Tract of the Musaeum Hermeticum 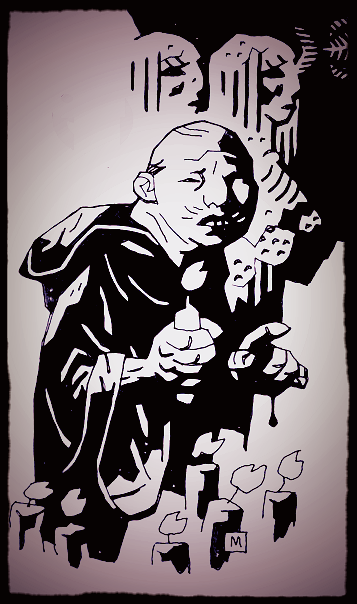 A misshapen midget scuttles into view. His gait is grotesque, his back is gibbous. His stunted frame and limbs are too small, too short. Esoteric scars, quotidian wrinkles, and chemical scabs mar his sallow, rice-paper thin skin. His moon-faced visage holds knife-slit eyes, malformed ears, and crease-cracked lips. His pate is bald, save for a few strands the color of dirty water. He smells of cinnabar, roasted honey, and poisoned dreams. He wears a hooded cloak the hue of fresh-spilled ink. Ichor drips from a sigil-formed hand, while the other grasps a burning candle whose melting wax resembles a squirming, screaming face. This is not a pleasant man.

“Impudent spit of my loins! I have served at the feet of two emperors!”

“Yes, father, you have served, kowtowing on your knees to mortal men whose petty kingdoms crumbled before your blind eyes. My masters are immortal, transcendent. By serving them, I shall master death itself—and it shall serve me well. As shall you, father, in this life or the next: I care not which.”
—Last mortal words between Phó Sinh Dũng and his father, Niowanggiyan

Born on the steps of Huế’s Purple Forbidden City in Vietnam, Phó Sinh Dũng was the unwanted bastard child of Phó Thj Khiêm, a concubine of Emperor Bảo Đại, and Niowanggiyan, an imperial alchemist. A Manchurian exile, Niowanggiyan and his forefathers had faithfully served the Qing dynasty as imperial alchemists: respected scholars of the Cantong qi, apothecary-thaumaturgists, and relentless distillers of the ever-elusive hsien elixer that would grant its imbiber immortality. Although Niowanggiyan’s service to the then six-year-old ruler, Puyi, survived the Xinhai Revolution of 1911 and the child-emperor’s subsequent abdication, the alchemist was shorn of his position and sustenance following Feng Yuxiang’s failed coup in 1924. Niowanggiyan spent the next decade near destitute, selling his services, often as a poisoner and abortionist, to whatever hand would toss him a copper yuan.

In 1936, Niowanggiyan traveled to Hsinking after being recalled by his beloved Puyi, who had been installed by the Japanese as the puppet-emperor of Manchukuo. However, Niowanggiyan soon fled his familial master after barely surviving an assassination attempt by Japanese agents who wanted Puyi to distance himself from traditional Chinese law and religion. Now considered a traitor by both the Republic of China and the Manchukuo Empire, Niowanggiyan fled to French Indochina. There, he wormed his way into the graces of the Nguyễn Dynasty and the then-king of Annam and future emperor of Vietnam, Bảo Đại.

During his service in Huế’s Purple Forbidden City, Niowanggiyan resumed his alchemical studies—at least when he wasn’t plying the flesh of concubines like Khiêm with promises of potions of love, beauty, and longevity. When Khiêm became pregnant and threatened to reveal Niowanggiyan’s treachery, the alchemist gave her a tincture to cause her to miscarriage. The tincture, however, only half-worked, as the poisonous chemicals caused Phó Sinh Dũng’s to be born prematurely and grotesquely disfigured. But much to Niowanggiyan’s chagrin, the gibbous midget-child survived.

Officially presumed to be one of the emperor’s myriad offspring, Dũng might have been summarily killed for his deformities. However, Bảo Đại suspected his alchemist’s infidelity, and so, to both test and punish his foreign-born servant, he charged Niowanggiyan with not only raising Dũng, but with demonstrating his prowess with waidan, or external alchemy, by ‘fixing’ the mutated child’s body. As a result, Dũng’s childhood primarily consisted of being his father’s unwilling test subject. Yet, despite having to endure his father’s disgusting elixirs, painful experiments, and cruel fists when said elixirs and experiments failed, Dũng learned much by observing his father—and by studying his thaumaturgic scrolls whenever his father wasn’t looking.

When Bảo Đại fled the Viet Minh and resettled in Saigon, Niowanggiyan accompanied him, as did Dũng, who by this time had become his father’s reluctant apprentice as well as lackey and whipping boy. As Niowanggiyan’s errand boy, Dũng often was tasked with traveling Saigon’s breadth to pick up various supplies and special materials. During these errands, Dũng was forced to do business with other occultists—many of whom were French and British colonialists involved in the First Indochina War. From these contacts, Dũng learned both French and English; they also exposed him to western-based alchemy, particularly Hermetism. These skills became particularly important when Bảo Đại left Saigon for Paris in 1954, taking Niowanggiyan, Dũng, and a host of other favored servants with him.

Once again expatriated, but now displaced in a foreign continent filled with foreign tongues and faces, the aging Niowanggiyan became almost wholly dependent upon his misshapen son. Dũng, meanwhile, became an outré darling of Paris’ occult underground, due to the exoticism of his homuncular features and knowledge of eastern alchemy and sorcery.

Unbeknowst to Dũng at the time, not all of his intrigued audience members were human. The Pyramid had found him, and once they did, they coveted his knowledge. Yet, Dũng surprised the warlocks with his willingness, even eagerness, to serve them. Compared to Niowanggiyan, the Kindred were almost kind. More important to Dũng, they were powerful: masters that held the keys to both immortality and true sorcery. As before, Dũng became an errand boy for his masters—and along the way, he learned much through careful observation and surreptitious investigations.

Niowanggiyan, meanwhile, watched his deformed son with gnawing, growing suspicion. Yet, when he finally confronted his oft-absent apprentice, he was unprepared for Dũng’s newfound sorcery and hitherto-hidden fury. Blending Daoist and Hermetic teaching, Dũng defeated his father in a fierce battle of thaumaturgy, transmuting Niowanggiyan into a thick candle whose wick, when lit, causes his father’s spirit terrible pain while also amplifying Dũng’s sorcery.

Shortly thereafter, Dũng was ordered by the Council of Seven to travel to New Orleans’ chantry. The warlocks’ reason for this mission was kept secret to all save the high regent, and perhaps Dũng. Yet, regardless of the reason for his arrival, Dũng quickly proved his value to the chantry, and within a few years, he became a ghoul of then-Regent Matthäus Goldfeld. Indeed, when Matthäus was called to Vienna in 1975, many within the chantry suspected that Dũng was somehow responsible or had been acting as the Inner Council’s spy from the very beginning. Naturally, Dũng has remained silent on the issue: as confirming his treachery or disconfirming his suspected connections would be a sure way to court a swift and terrible death.

Most of the chantry, ghoul and Kindred alike, distrust the gibbous-midget. For instance, he attempted to win the next regent’s good graces, but Bornemann has staunchly refused to have any dealings with the deformed alchemist. Dũng may have very well died from vitae withdrawal were it not for Joseph Doyle taking pity on, or perhaps advantage of, the starving ghoul. Under Doyle’s patronage, Dũng’s duties took him increasingly outside the chantry, during which time he made a name (not always good) among the Big Easy’s ghouls. During this time, Dũng served much as he had in the past: a publicly servile errand-boy, sorcerous assistant, and spy. Despite performing ably in such roles, Dũng was released inexplicably from Doyle’s service shortly before Hurricane Katrina.

Dũng, though, would not remain long without a domitor. In the midst of Katrina’s chaos, Dũng found the neonate Mallory Yang and saved her from final death at the ravening jaws of a wight. Since then, he has become the technomancer’s tutor and most trusted advisor. Although serving a newly-Embraced vampire is a steep step down from the prestige and power of being tied to Doyle, much less to Goldfeld, Dũng seems to finally have found a mistress that is humane (if still inhuman). Indeed, though Dũng’s Daoist alchemy could not be more different from Yang’s technological sorcery, the two thaumaturges have found common ground in their lowly places within the Pyramid—Dũng has yet to receive the Embrace after decades of competent service, while Yang’s modern-minded approach to thaumaturgy is looked down upon by her conservative superiors.

However, some within the chantry wonder if Dũng is not in truth serving a higher master, be it Doyle, von Steinhäuser, or even Vienna. Or perhaps, Dũng’s true master has always been none other than himself. 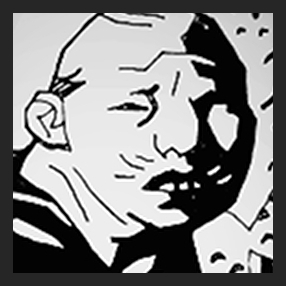