“It is hard to find fault in a man who believes so strongly in the truth of justice. Perhaps the only unkind word I could muster for Mr. Lebeaux would be naiveté. But it is ever the providence of the foolish and the naive to challenge and change.”
George Smith
“You’ll thank me later for this one, kid.”
Peter Lebeaux upon arresting Lavine’s near-victim to save her life
“Man Jesus and all the white loa. I’m sorry, Pete. I should’ve been square with you. I’m so very, very sorry.”
Louis Fontaine
“I can’t think of anyone in the city that I trust more than you.”
Celia Flores 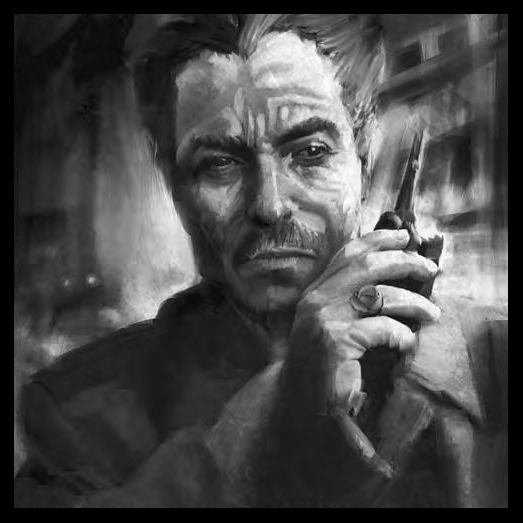 Lebeaux is short but well-built man, nearly stocky, with a square jaw line and a full but well-maintained mustache. His voice carries the firm and commanding tone of a law enforcement officer. His gray eyes are alert, methodical, and stubborn, doggedly pursuing any detail cocky enough to think it can slip past his notice. He is rarely seen wearing anything but a gray trench coat over muted slacks, a white shirt, and dark tie. A cigarette looks like it should belong dangling from his lips.

Lebeaux shoulders a remarkable number of responsibilities and ambitions for so young a vampire. The NOPD homicide detective has experienced the Requiem for just a little over a decade. A childe of Erwin Bornemann, Lebeaux is a faithful servant of Antoine Savoy and true believer in the Toreador’s cause. Lebeaux despises what he has seen of Vidal’s reign, and while he does not harbor the same hatred for Baron Cimitière that many of Savoy’s other followers do, he does not believe the Samedi houngan is a viable alternative prince.

Quite simply, Peter Lebeaux professes belief in law and order, no less so than he did as a mortal, but he also believes in the just application of the laws. In Vidal, Lebeaux sees only abuse of power, whereas he believes Savoy’s promises of a more enlightened rule. Lebeaux believes the Kindred require firm but fair guidance no less than the kine, and he intends to bring that about by whatever means he can. Lebeaux has not expressed desire for any true political power of his own—though this could well change in years to come, given how young the Tremere is as a vampire—only the position necessary to do his job. He already serves as Savoy’s warden of the French Quarter and eventually intends to serve the entire city as sheriff once the Toreador is prince of New Orleans. That and ensuring that Savoy does become prince are believed to be the current limits of his ambitions. How his grandsire Elsbeth von Steinhäuser, a fervent supporter of Vidal’s, feels about her grandchilde’s political affiliations is unknown.

Peter Lebeaux crossed paths with his old partner Louis Fontaine during the latter’s investigation into the slattern slashers. Lebeaux had also been assigned to the case by NOPD, though Fontaine soon ascertained that Clan Tremere had its own interest in the recent murders. The two detectives waxed nostalgic (and bitter) over days gone by, but Lebeaux was unwilling to offer substantive information to assist Fontaine’s investigation, citing “things [he] couldn’t talk about.” Fontaine later observed camera footage depicting an indistinct but presumably Kindred figure matching Lebeaux’s height and build breaking into his office, then performing a sorcerous rite to prevent his compromised phone from being eavesdropped upon.

Lebeaux interrogated Micheal Kelly after his ill-fated confrontation in the Evergreen Plantation with Cletus Lee Boggs. The Brujah eventually succumbed to repeated draughts of Savoy’s vitae, but held out for an entire five nights.

Lebeaux also recently clashed with the Gangrel Lavine, who sought to gain audience with Mother Iyazebel by delivering two kine for her use as vessels. Knowing full well the depths of the Catharite Malkavian’s depravity, Lebeaux used his authority as warden to impound the two would-be sacrifices as restitution for Lavine’s violation of the Fifth Tradition. Scant nights later, he used his mortal authority as a police officer to arrest Lavine’s next two vessels for underage drinking. The Gangrel managed to sneak a third pair into the Ursuline Convent, but still could not evade the stubborn detective, who traced them inside. The two Kindred lashed out with their Beasts and the Tremere was soundly bested by the much older Gangrel. Nevertheless, the struggle spooked the two mortals into leaving. Thus far, the Kindred cop has succeeded (albeit with some risk to the Masquerade) in preventing Lavine from delivering any victims to sate Iyazebel’s appetites.

Lebeaux showed up following the arrest of Maxen Flores to take a statement from his daughter, Celia, and his ex-wife, Diana, pertaining to the abuse. He ran into Celia again later following her devil’s bargain with Veronica Alsten-Pirrie to give her a crash course in Kindred etiquette and warn her off from her admittedly suicidal plan to go after Maxen’s friend in the shadows. Celia thanked him for his advice and offered to set him up with her mom, who apparently thought that he was “easy on the eyes.”

The next evening he apprehended Emmett Delacroix when Celia failed to show up to their meeting to collect the evidence that would bury Maxen. After Celia’s Embrace, Lebeaux was the one to locate her body through his clan’s thaumaturgy, allowing Antione Savoy’s people to retrieve her before she could be ashed by the rising sun. He accompanied Celia to retrieve her mother from the hospital to keep her safe from Maxen’s retribution and brought Celia, Emily, and Diana to meet Doc Xola so the bokor could re-attach Diana’s sawed off toes. He has steadfastly refused to date Diana in the years since, but Celia keeps trying.

Pete requested a meeting with Jade following her abduction by a pair of hunters. He told her that he’d look into whether or not her mortal identity was compromised, then asked if she’d like to help him question Roxanne Gerlette, a Ventrue that Jade had apparently staked and kept at her spa for some time. Later that evening he told her that Roxanne had confessed to having a child with her father Maxen that now lives with her aunt, as the woman couldn’t have children of her own. He and Jade made a plan to look into the uptick of hunter activity with New Orleans and offered to let her change the face of his ghoul to serve as spy. He turned down a date with her mother and offered to set her up with his old partner, though when Jade suggested he join her and they double up to keep an eye on the pair he told her that a gorgeous Toreador like her would have no trouble finding her own date.

A few nights later Jade and Pete met again following another hunter attack. The Tremere offered his services to look into the blood and performed a ritual that revealed a few clues about who was behind the attacks. He also delivered the information from the meeting of hunters, and performed a second ritual where they confirmed the identity of Caroline’s sire. Pete turned down another date with Diana, though his alarm at how often the woman puts herself in danger means that he obviously cares. Jade has resolved to keep trying.

Pete was alarmed to learn that Celia had ghouled her mother following another lick’s attempt to reclaim the woman. He erased the memories of Celia’s other ghouls and Roderick Durant when he found out that Celia had told them about her mother, but at Celia’s request he left Dani’s intact.

Celia turned to Pete when she realized that the hunters who had attacked her were being recruited for a government organization with a training camp in Georgia. He told her to talk to Lord Savoy before she pursued anything further on that end, then set her up with his sire when she mentioned she had a few questions about something the older Tremere had studied. Pete was unimpressed to learn that Celia had traded four boons to his sire for the information and frankly told her that if she were anyone else he’d have turned her in for infernalism.

Pete showed up when Diana called him to erase Lucy’s memories after she inadvertently broke the Masquerade by overhearing some Kindred-sensitive topics of conversation. Pete ended up erasing Emily’s memories as well when he found out that she’d learned the truth of Kindred. He offered some advice to Diana for home security and said he’d draw some defensive wards that Celia requested for Lucy’s room. Privately, Pete gave Celia a thorough tongue-lashing for all the problems she had caused lately and asked if she were going to continue to be a headache. A distraught and chastened Celia promised that she’d toe the line and thanked him for his help.

Peter Lebeaux is the childe of Erwin Bornemann, the Tremere clan whip in New Orleans and regent of the city’s chantry. Erwin is the childe of Elsbeth von von Steinhäuser, the clan’s local primogen and the high regent of Texas, Arkansas, and Louisiana. Elsbeth is believed to be the childe of Karl Schrekt, a former mortal demon hunter and one of the longest-serving justicars for his clan. All manner of incredible rumors surround Schrekt from having diablerized Lupines to meeting Caine himself. True or not, the retired justicar is one of the most feared Kindred in his clan, and sat on the Justicarate during a number of turbulent periods including the Napoleonic Wars and World War II. Schrekt is childe to Lotharius, the prince of Vienna during the Middle Ages, a former member of the Council of Seven, and one of the first Tremere Embraced into the clan outside of the founder and his original seven followers. His rule laid much of the groundwork that enabled Vienna to become the bastion of Tremere strength it is tonight. He was slain by the future Banu Haqim caliph Thetmes during the 1529 Ottoman siege of Vienna. Lotharius was childe to Etrius, the councilor of Eastern Europe, first among equals on the Council of Seven due to his long association with the clan’s near-mythical founder, and one of the driving forces behind Clan Tremere’s rise from a band of mortal magi to the pillar of the Camarilla they are tonight. Etrius is the nominal childe of Tremere.

Lebeaux’s elder brother-in-blood Julien Derneville was a civil rights lawyer of middling accomplishment in the Pyramid. He was destroyed in 2015 at the presumed hands of the Baron’s followers. 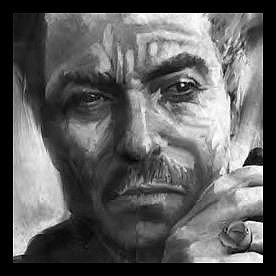