Hidebound relic of an age gone by

“The Roman Corinthian column is lauded as the quintessential architectural pairing of form and function of the classical era. Despite an archaic facade, it has evaded aesthetic obsoletion by pure merit of its structural integrity. Le Maison Carrée or the Temple of Apollo would not have withstood the ravages of time without the support of this integral component. So it is with New Orleans and my sire.”
—Adelais Seyrès

“Primogen Chastain is a lovely lady of the Crescent City, and I won’t hear a word against her just because you think she’s ‘out of touch.’ "
—George Smith

“Primogen Chastain is a shining example of how poorly many are suited to immortality. At the height of her influence when I arrived in New Orleans, she was likely the most celebrated individual in the city next to Prince Vidal himself. She charmed all she met, myself included, and wielded that charm as weapon as deadly as it was riveting before her descent into torpor. That remarkable individual appears to be long dead, having been buried alongside her and never risen. The relic dusted off and placed before others when I last saw her in 2005 bore almost no resemblance to the vibrant Kindred who once occupied the same shell. She proved unable to adjust to the modern world after long torpor, squandered affection, and alienated allies. She has not simply failed since her awakening: she has shown herself to be a failure. In hindsight it might have been more merciful to put an end to her while she slept. I wonder if she, too, like the lamed and degenerated masses locked in assisted living, would not have rather died.
That she has persisted is a great tragedy for herself, for her legacy, and for her childer.’"
—Jonathan North 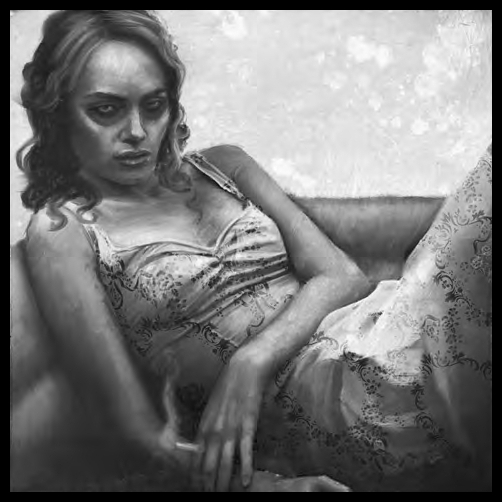 Pearl is considered somewhat gauche in her tastes among her clanmates. She ceased trying to keep up with the various fashions and cultural trends a long time ago, and in her attempt to go for a “timeless” and “classic” look, she ends up coming off as antiquated and dated. Although she was Embraced in her late 30s (“early” 30s, she says), she has a dusty, forgotten air about her that betrays the decades she has endured. Although trapped at the moment of death, it is as though her body has continued to bear the weight of its passing years. Yet the sagging jowl, the twin fans of wrinkles around her cloying eyes… these are products of her aged spirit, not reflections of physiological change.

As much as she would hate to admit it, Pearl Chastain is a relic of an age gone by. As one of the oldest active members of the city’s Cabildo, Pearl has seen and weathered a great deal. She’s watched the city blossom into the jewel it is tonight, but as a result, she knows the sadly high price paid for that transformation.

Pearl remembers little of her days as a mortal woman, and that fact has troubled her more and more of late, especially while she sleeps. During the city’s booming period in the mid-to-late 19th century, Pearl was one of the most active and influential Kindred in the city. She had the respect of nearly every Kindred, and worked very hard to ingratiate herself with even the most reticent of souls. In her time, Pearl made allies of bitter enemies and princes out of paupers. She led her clan to estimable achievements, always coming off as the soul of modesty, and even managed to make a lasting ally out of an ideologically opposed Prince. But that time is gone… her time is gone. After falling into torpor during the close of the Victorian Era, Pearl awoke nearly a century later to a world much-changed.

She could not change with it.

Come the 21st century, Pearl is but an echo of her former self, bereft of vibrancy or even motivation. She still holds the power and prestige she has amassed, but only by virtue of not wishing to see it taken from her. Pearl is a Kindred who has passed her prime, but like all the undead, she has been forced to continue on into perpetuity, denied even the dignity of retiring quietly from view.

George Smith shared a dance with Pearl Chastain at the Windsor Court’s Elysium Primo. She reproached the neonates who lost control of their Beasts.

Pearl Chastain was marginally involved in the scandal surrounding John Harley Matheson’s alleged headhunting. As Matheson was one of Pearl’s few surviving Antebellum peers and shared a seat with her on the Prima Invicta, no one was surprised that she maintained her fellow elder’s innocence. The political effect of her support was largely negligible.

Lineage unknown. Pearl Chastain has not publicly spoken of her sire, but is believed to be of the sixth generation and a great-grandchilde of Arikel.

None known, though many suspected. It was common during the long-ago nights of Pearl’s early Requiem for sires to Embrace vast numbers of progeny.

Pearl is rumored to have (or have had) progeny in the Old World, but has spoken of none. Her eldest childe in New Orleans, Accou Poincaré, is the former prince of Santiago, the regent of the Lower Garden District during her torpor, the junior of their clan’s two primogen (though an elder in his own right), and the third-eldest of the Prima Invicta. Pearl’s next-eldest childe was Bruno Courtet, a poseur of limited artistic talents. He served as myrmidon (a titled position for bodyguard) to her and Accou before being destroyed by the vampire hunter Nathaniel Bordruff in the 1920s. Pearl’s second-youngest childe Barthélemy Lafon was a semi-famous Creole architect and associate of Jean Lafitte’s’ who designed much of the Garden District. He was destroyed during Hurricane Katrina. Pearl’s youngest childe Adelais Seyrès is a vicious-tongued harpy and councilor on the city’s Prima Invicta. All of these childer but Adelais have Embraced progeny of their own, and through them, Pearl is ancestress to a vast brood of Toreador throughout Louisiana, Cuba, and beyond. 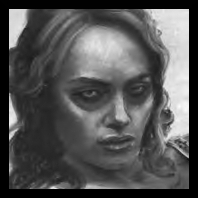