“She walks into my life legs first, a long drink of water in the desert of my two-hundreds. Her shoes are pinks; her eyes are honey. She’s a French flag in occupied territory, and I fall for her like Paris. She mixes my metaphors like a martini and serves up my heart tartare.”
—Louis Fontaine

“Creole women take after Europe in their intelligence, after the Tropics in the logical violence of their passions, and after the Indies in the apathetic indolence with which they commit or suffer good and evil.”
—Honore de Balzac 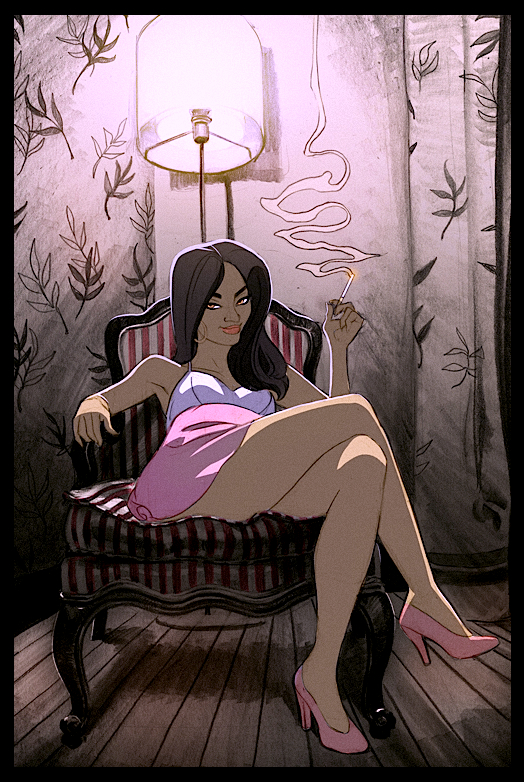 It was the dream of every dark-skinned teenage girl who attended the quadroon balls to meet a rich white suitor. Such galas were purportedly débutante balls for young women to introduce themselves to proper society, but in truth were little more than auctions for mulatto mothers to sell off their lighter-skinned daughters as concubines. The right match and a fortunate débutante could enjoy a comfortable life as a kept mistress, possibly even a common-law marriage, and knowledge that her even whiter-skinned children would enjoy better lives than she did.

Mélissaire was as eager to meet a rich suitor as any quadroon girl, and after a pale gentleman took her hand for that first waltz she never glanced back.

Alejandro Rojas y Batiz had killed his last herald in an unfortunate frenzy and required a replacement to serve as his voice and representative among the All-Night Society. Mélissaire was a perfect choice: lovely, bred for a life moving among her betters, and a low-hanging fruit that a mere display of material wealth was sufficient to pluck. When the Ventrue offered Mélissaire his blood, he hardly needed to employ his powers: she knew better than to question what a white man wanted to do in bed. Upon understanding what she was, the quadroon placée saw little difference between life as a ghoul and one as a kept mistress. Her domitor provided her with the luxury she’d wanted, treated her as kindly as any man was likely to, and why think about children when she would live forever?

The newly-ghouled placée, however, would serve her domitor for only a handful of years before he perished in a fire during the Union’s otherwise nonviolent capture of New Orleans. Mélissaire attached herself to one of Baylor’s visiting archons, having always been one to throw in with powerful men when she saw them. She faced a harder life after the justicar’s retinue departed and Reconstruction began. The old quadroon balls and the Creole society they supported was dying out, so like many former placées, Mélissaire turned to work as a courtesan. Her irregular supply of vitae caused her to visibly age over the next three decades and she despaired that she would lose her beauty.

Her prayers were answered in 1895 with the appearance of Antoine Savoy, who like Alejandro before him, desired a comely and well-spoken servant to serve as his voice. The quadroon courtesan knew a meal ticket when she saw one and gladly accepted the blood bond in return for a life of comfort and security.

Mélissaire has faithfully served her domitor in the 120-odd years since his rise to power and endeavors to present the same image he projects to his fellow Kindred: affable, charming, and the spirit of warmth and good humor. Although most ghouls afford Mélissaire the respect she is due as a powerful elder’s favored servant, the former quadroon placée is despised by the prince’s herald, the Hussar, in a microcosm of the conflict that exists between their domitors. Mélissaire, however, purports that the affairs of Kindred elders are far above her station and concern, and answers the former cavalryman’s animosity with the same smile and glib wit she displays towards any other acquaintance. Indeed, she seems to take almost perverse pleasure in being as deferential and respectful to the older ghoul as possible, infuriating the Hussar through his limited ability to publicly respond while observing the bounds of etiquette. Rumor holds that Mélissaire is actually engaged in ceaseless intrigues to bring low her “archrival,” but if such is the case, they have yet to show past the smile she always wears in his presence. Some ghouls believe she enjoys infuriating him more than she’d ever enjoy bringing him low.

Due to Antoine Savoy’s unusual (for an elder) propensity for entreating in person with Kindred far below his station, Mélissaire has more time to herself than many heralds. When not representing her domitor to other vampires, she runs an escort service that caters to the French Quarter’s social elite. Politicians, judges, and businessmen alike count themselves among the former courtesan’s clients and provide her domitor with another hold over the Vieux Carré’s most influential residents. Mélissaire is also a devout fashionista and can regularly be found at shopping concourses spending Savoy’s money. Some Kindred think she does this purely to show off how generous the lord of the French Quarter can be to his servants, all the better to lure impressionable and cash-strapped neonates to his side. Mélissaire laughs off such hearsay as exactly that, stating that a lavish lifestyle was what she’d implicitly agreed to with her first domitor at that long-ago ball, and Savoy is merely still taking care of her.

Mélissaire has one hobby seemingly unconnected to her domitor: race car driving. The squeal of tires against asphalt is music to her ears, though she seems to enjoy remaining evasive as to the source of this particular interest. Even the bought and sold servants of Kindred elders can have some small part of their lives to call their own, can’t they?

Melissaire receive the Blood in the mid-19th century from Alejandro Rojas y Batiz. After spending several decades as an independent ghoul, she accepted Antoine Savoy as her domitor in 1896 and has served him ever since. She finds Toreador vitae more to her taste than Ventrue blood ever was.