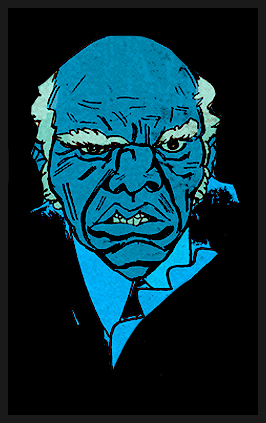 The ghost of Lebrun Pidoux is a gibbous dark-skinned man dressed in the antebellum fashion of the middle class with more elevated aspirations, or at least pretensions: black frockcoat with short tails, plain cravat, unembroidered vest, and preacher boots. In life, his skin was a sallow-brown, his wide lips and flared nostrils clearly announcing his affranchi ancestry. His bone-white, bushy eyebrows and mutton chops sharply contrast with his bald pate. His right eye is a dirty green, but his left is a more bulbous, iris-less orb with a solid-black, unchanging pupil: a wooden eye to replace the one he lost in a minor, but bloody slave uprising in his youth. Characteristically, Lebrun fought to quell rather than support the uprising, and nearly all the shed blood belonged to the slaves, rather than their masters. For those who can communicate with the disembodied, Lebrun speaks antiquated French, but slips into more bastardized Creole whenever his ire is raised-–which is often.

In the halcyon days that preceded his ruin, Lebrun Pidoux belonged to the peculiar antebellum class of gens de couleur libres, or “free people of color.” Descended from a Spanish creole and an affranchi from Saint-Domingue, Lebrun was a French-educated mulatto who owned a brick factory on the Bayou Bonfouca. He both owned and rented slaves, and worked them unmercifully and supplied much of the brick for the homes of his fellow slave-owners up and down the Bonfouca and Pearl River.

The columned house he built north of the St. Tammany parish line did not contain the Italian marble or Spanish ironwork of the sugar-growers whose wealth was far greater than his own, but he strove to emulate their way of life as best he could. He planted live oaks along his carriage drives, hung his balconies and veranda with hydrangea, swamp lilies, and azaleas, and lashed his slaves until they kept his pecan and peach orchards broom-swept clean.

Although Lebrun was not invited into the homes of his white “peers”, they respected him as a businessman and taskmaster, and treated him with courtesy on the street. That was almost enough for Lebrun. Almost. He sent his children north to be educated, in hopes that they would marry up, across the color line, and that the high yellow-brown stain that limited his ambition would eventually bleach out of the Pidoux family skin.

Unfortunately for Lebrun, when the Federals came down the Pearl River in April of 1863, they considered him every bit the equal of his white neighbors. In democratic fashion, they freed his slaves; burned his fields, barns, and corn cribs; tore the ventilated shutters off his windows to use as litters to carry their wounded; and chopped up his imported furniture and piano for firewood. Unhinged by the brutal, piecemeal dismemberment of his life’s work, Lebrun tried to forcibly stop the Union soldiers, and was promptly skewered by a half-dozen bayonets.

In half-apology, the Yanks delivered Lebrun’s corpse to his now-freed slaves, erroneously believing that they would give “one of their own” a proper Christian burial. Instead, the vindictive Vodouisants left his exsanguinated body to bloat and rot under the bayou sun. Furthermore, their mambo cursed Lebrun’s shade to linger at the Crossroads, forever barred from passing on until his soul became as “lily-white as the skin he coveted.”

Yet, it was the thirst for vengeance rather than atonement that consumed Lebrun’s spectral heart. As a newly risen wraith, his first act was to torment the emancipated slaves that squatted on his ravaged land. After insidiously goading them to murder one another for the few baubles missed by the Unionists, his shade searched for the Federal troops, but they had already departed. Incensed, he vented his spectral rage against other local ex-slaves –and later against any carpetbagger who dared stay overly long in his parish. Although his depredations were indirect and oft-frustrated by his immaterial nature, his actions nonetheless helped facilitate the viral-esque spread of the Confederate, ex-slaver Boggs and their antebellum bigotry and prejudicial pride.

Naturally, such successes gave Lebrun no peace—although the low-spirited ghost took pleasure in the suffering of “darkies and foreigners who forgot their place.” Both of these prejudices would converge when the Nicaraguan Isabelica Calero-Pisanob arrived in Slidell and was Embraced as Cletus’ childe and bestowed with all its associated privileges, authority, and power. So enraged by the apparent mockery of his ideals–or at least inflamed with jealousy by the Hispanic immigrant’s attainment of his eternally thwarted dream–Lebrun Pidoux haunted Isabelica with the intention of driving her insane, suicidal, and to ruin commensurate with her rise.

Unfortunately for Lebrun, his would-be victim was also a powerful necromancer. Sugarbelle made short work of the resentful ghost, but rather than slay “Mas’er Pidoux” a second time (his spirit would only reform, after all), she enslaved him—chiding him that he too had forgotten his place. Naturally, Lebrun railed against this “indignity,” but his rage has thus far proven impotent against Isabelica’s bindings. Yet, his pent-up fury has made him all the more useful whenever Isabelica unleashes him against the Boggs’ myriad enemies in the Skinlands of beyond. 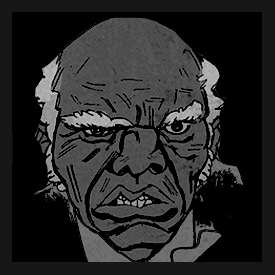