“When a straight man puts on a dress and gets his sexual kicks, he is a transvestite. When a man is a woman trapped in a man’s body and has a little operation he is a transsexual. When a gay man has way too much fashion sense for one gender he is a drag queen.”
—Wesley Snipes

“People changed lots of other personal things all the time. They dyed their hair and dieted themselves to near death. They took steroids to build muscles and got breast implants and nose jobs so they’d resemble their favorite movie stars. They changed names and majors and jobs and husbands and wives. They changed religions and political parties. They moved across the country or the world — even changed nationalities. Why was gender the one sacred thing we weren’t supposed to change? Who made that rule?”
—Ellen Wittlinger 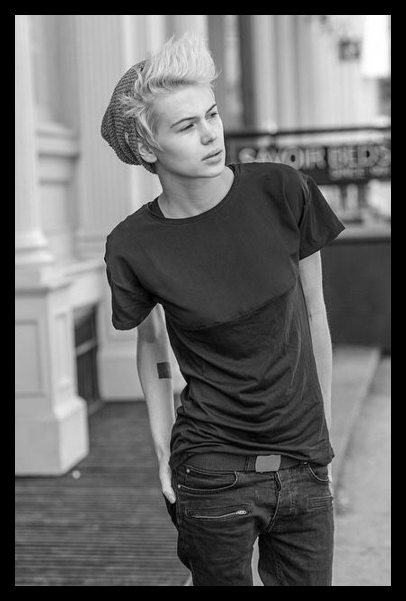 Landen is slight and wiry. Their jaw is a little more square than most females, though it’s completed by a pointed chin that takes the harshness from their face. Bottle blonde—platinum, really—but touches up their hair enough that their roots never show. Quick to smile and show off the perfectly even teeth brought by years of braces, with lips that lack a prominent cupid’s bow but are nonetheless full. Landen favors tee-shirts and skinny jeans that somehow still leave their gender as androgynous as they choose to be that day. Often seen with a skullcap or beanie despite the heat.

Landen Parker does not subscribe to conventional gender norms. Born to a family of traditional values, with a father who supported the red and a mother who supported the father, Landen had a rough time of it growing up. Born with a double X and a Y chromosome, Landen is more at home as a “they” than they ever were as a “he” or “she,” though sometimes they sway one way or another.

Life is a spectrum, they are fond of saying, and I am simply somewhere on it. Gender fluid, nonconforming, and pansexual, Landen makes friends easily and puts both males and females at ease around them. They’re quick to laugh when people mistake their gender and call them the wrong pronoun, and just as quick to point it out when it happens more than once.

Landen is cheery despite the bullying. They enjoy singing, feel that P!nk speaks to them on a spiritual level, and are currently working on a remix of her 2001 hit, Family Portrait. Landen hasn’t spoken to their parents since coming out and feels most at home with their work family. Has a habit of calling people “hun.” After finishing their time at Aveda Institute in NOLA for the full cosmetology license they got a job working full-time at Flawless, and either wants to be the next Stylist to the Stars or open a nonprofit working with the LGBTQ+ community.