“The society that insists on drawing a broad line of demarcation between the fighting man and the thinking man is liable to find its fighting done by fools and its thinking done by cowards.”
Thucydides
“All frauds, like the wall daubed with untempered mortar always tend to the decay of what they are devised to support.”
Richard Whately
“Some have been thought brave because they were afraid to run away.”
Thomas Fuller

True to his name, Junior looks just like Calhoun Boggs, or at least what the incestuous patriarch might look like stripped of age, muscles, and a spine. Even disregarding his mousy hair and eyes, Junior’s scrunched posture, timid gaze, and clean business attire have made many Boggs, including himself, wonder whether Junior might be the result of one of Wynona’s sexual rendezvous outside the clan. Few, however, voice this suspicion, for fear of Calhoun’s violent reprisal. Consequently, Junior’s persistent prayers for himself to be ‘’only” a half-Boggs bastard are always unspoken, but no less fervent.

Like most Boggs children with incestuous ancestry, Junior was born with a mutation that made him different than his peers. In the case of Wynona’s middle child, that mutation was a conscience. In contrast with most of his seemingly psychopathic kin, Junior grew up with an innate moral compass that helped him understand right from wrong, and this ‘defect’ caused Junior all manner of trouble and grief as he increasingly learned just how wrong his family was.

Yet, like his alleged father, Junior also had the rare gift (for a Boggs) of a fully functioning brain. Consequently, Junior keenly recognized what would happen to him if he objected to, or worse tried to snitch about, his clan’s manifold sins. Thus, Junior long ago chose the coward’s path. Since then, he has avoided directly participating in, but has done nothing to halt, his kin’s depravities. For example, once Junior discovered his family’s cannibalistic fetish, he became a vegetarian, claiming that his diet is the only way to manage his gastric ulcers (of which he has many, fed by his guilt-wracked conscience). He has likewise refused to date or marry any of his incestuous cousins—and doesn’t dare introduce an outsider to his clan.

Although this prudish timidity has incited no end of heckling from his family, the Boggs clan not only tolerate Junior’s ‘defects’, but have learned to exploit them. When Junior asked his parents for permission to attend Slidell’s public schools, his parents were at first shocked, but they let him go—even as they made him ‘report back’ on the community’s non-kin children and teachers. When Junior wanted to continue his education at college (something virtually no other Boggs has ever done) and earn a degree in Business Administration, his family were once again bewildered, but supported him—so long as he used that knowledge to help his siblings and cousins in their entrepreneurial enterprises, legitimate and otherwise (e.g., teaching the White Reich OMC basic supply and demand principles to boost their drug trade profits). After graduating from Delgado Community College in Slidell (as his family just laughed off his suggestion of leaving home), Junior completed an online accounting program from LSU—and reluctantly became his clan’s tax advisor (i.e., coach on how to best cheat the IRS).

Two diplomas in hand, Junior was given a job at Textron by Calhoun. Two years later, and after becoming both a Certified Public and Management Accountant, Junior received a leap-frog promotion to become the direct assistant to Textron’s chief financial officer: Rupert Locke, an old, doddering man that rarely showed up to work. Unbeknowst to Junior, and the rest of Textron’s staff, Rupert died five years ago, with his corpse since being animated and controlled by one of Isabelica’s wraiths.

As Textron’s de facto CFO, Junior has the ‘pleasure’ of continuing to fatten his family’s coffers while simultaneously covering the paper trail of Cletus’ off-the-book expenses and the Giovannini’s constant multi-million dollar embezzlements. Junior knows that his actions are criminal as well as immoral, but he has played the coward’s role for far too long to grow a backbone. Plus, the courts can only jail him. His kin can do far, far worse.

At work, Junior is known as “Cal”, as most people assume that his name must be Calhoun since his family calls him “Junior” (when not using other less-than-polite names). In reality, Wynona and Calhoun could never agree on what to call their second boy. When his elder brother John-Boy started calling him “John-Boy Junior” or “Junior” for short, the name stuck. Needless to say, Junior doesn’t care for either of his ‘names’—but he’s too polite, and craven, to complain.

Despite his passive doormat personality, Junior has a secret: he is Sugarbelle’s blood doll. She comes to him late in the night, in their mutual hour of need. Her Kiss is like a drug that lulls him into further depths of complacency, a puppet eager to be pulled. He believes he ‘loves’ her (and foolishly that she loves him), as she represents everything that he is not, but wishes that he could be: exotic, confident, and in control. 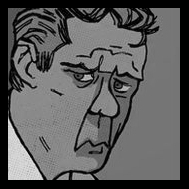