“I have always thought the actions of men the best interpreters of their thoughts.”
—John Locke 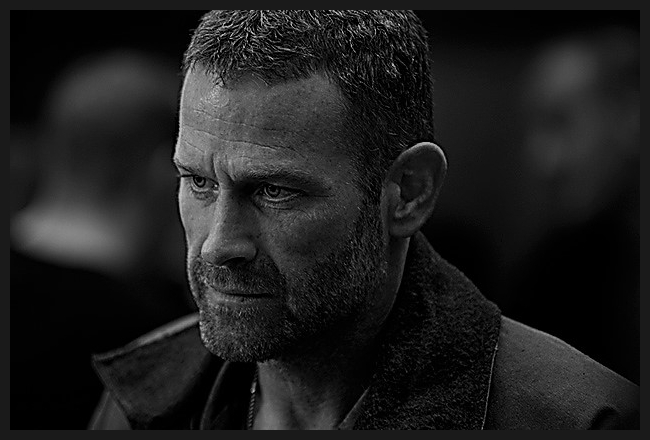 It begins with a grimly set visage, all hard lines and harder eyes. Those lines are the marks of a life that has seen cruel things, bitter winters and unending winds, that have seen strain and pain and hardship. Those eyes are the blue of ice, and they stare, unblinking, unwavering. Dead eyes absent human compassion. Skin as rough and weathered as the face of a cliff, and just as unyielding matched with hair and stubble as hardy and prickly as dying desert scrub brush. The remains of a beard and mane he carves off each night.

Beyond that comes his size. In his time he towered over his peers. Today he still walks tall among men. Slabs of muscle laid across his shoulders and chest, undeniable physical power wrought not in a gym but in a life of physical work. Gorilla sized hands and corded muscles like steel cables under his skin. The swagger it gives him with each step, the effortless confidence that he can take every comer, any comer.

Then the details. The red crust under his fingernails. The callouses on his fingers. The scars on his arms and chest. The violence written across his body. The fine clothing he wears, crisp and clean, sometimes rugged but always quality. The fine leather belt. The knives that hang on it, so unlike everything else, worn and weathered like the man. The only thing as constant as him.

A voice crisp and precise, each word clear despite his quick pattern of speech. A bearing like that of a mountain, heavy with age. Some Kindred seem no older than they did the night they were Embraced, but this monster is not among them. Instead a gravity and weight follows to him, a density that cuts through crowds like a lead weight on its way to the bottom of a lake.

In the modern era, outside of his haven, Jonathan prefers to dress in rugged, expensive, high quality outdoors clothing from well known brands in darker colors and earthy tones. Quick drying, wicking, and tough pants with many pockets, synthetic undershirts with heavier over shirts, and leather jackets. Clothing that seems slightly out of place in most places, but rarely completely out of place anywhere. The kind that lasts, that stands up to punishment, that gets dirty and survives it.

In private he prefers surgical scrubs in dark reds, exchanged frequently and burned after use. They both help maintain the tie to his past as a doctor and serve the practical purpose in his surgical and medical pursuits (and are quite comfortable besides). He’s been known to entertain trusted visitors in such garb, but virtually never departs from his private demesne in it.

Both preferences gives way to necessity. He is not so hide bound to his preferences that he cannot dress up or down, as required (though rarely the latter). Though he finds clothing shopping tedious (and provides instead detailed measurements for loyal ghouls to handle), he’s vain enough that he’s unwilling to present himself poorly during high profile social events and is willing to (begrudgingly) wear tailored three-piece suits and other fine clothing, often inverting white suits with black shirts.

• He and Michael Kelly fought during the war in Europe
• He’s the Kindred equivalent of a plastic surgeon, can make you look however you want – for a price
• He’s no longer an archon because of all the Kindred they killed during Katrina
• He’s an archon here because a justicar is coming back to the city soon
• He was a Nazi during World War II
• He’s the childe of Justicar Schrekt
• He’s here to take over for the chantry, you know, because of all the Tremere stuff lately
• He was a hunter in life, and still is as a Kindred
• He was Embraced in New Orleans and spent decades there prior to the war
• He and Marguerite Defallier used to have a thing way back
• He’s secretly a member of the Dragons
• Jonathan North isn’t his ‘real’ name
• He arrived in New Orleans with another Kindred no one has seen since
• He’s worth billions, stolen Nazi art and gold and investments
• He’s afraid of guns, they’re one of his banes

* Generation among Tremere is a notoriously murky matter given the clan’s past history of diablerie and their unusual origins. The generations of Jon’s earliest Kindred ancestors are approximate and assumed numbers in relation to other clans.

Jonathan possesses a number of further kin whose blood ties are too distant to be listed here.

A detailed Lineage may be found here.

Jonathan’s eldest childe Heinrick Roehr is a German near-ancilla currently residing in Rio de Janeiro. Dedicated physicist in life turned fearsome occultist in his Requiem. The few that know of the existence of Jonathan’s second childe Larry Newton know little of the neonate that never made it out of the Pyramid. Jonathan’s youngest and yet-unreleased Kyrstin Grey childe has accompanied him to New Orleans from Seattle, Washington. He has higher hopes for her than her elder broodmates.