In mortality, Senator Huey Boggs resembled a dime a dozen Dixie politician, though one whose bayou ancestry was unmistakable: redneck, wide-floppy ears, Cajun-blue eyes, and teeth as neat and straight as a hurricane-tossed trailer park. As one of the incorporeal undead, his looks have only backslid. His once well-coiffed blonde hair is a thrashed mess, just as his now-hangdog face is marred by eternal bruises, black-eyes, a broken nose, busted lips, and smeared blood. One of his arms hangs limply at a sickeningly wrong angle, and his abdomen and hips are a crushed, sticky-black mess. His spectral form wears the now-phantasmal tussled and torn clothes of his murder-day: half-unbuttoned dress shirt, unzipped slacks, one leather shoe, and of course the ghostly echo of his damnable blue tie.

Huey Boggs was born in 1935 amidst the bayou marshlands of Eden Island. His parents were a pair of Cajun nutria- and crab-trappers who hailed from a branch of pseudo-exiles from Slidell’s clan (allegedly because they preferred the taste of catfish, clams, and crabs to long pig). In a display of non-familialism that would haunt her child for all the days of his life and beyond, his mother, Clarice-Adele, named him after the famous assassinated governor, Huey Long, which earned him the largely derogative nickname of ‘Huey Lil’.

Huey nonetheless proved a bright child whose mind and manners were honed on the educational whetstone of Our Lady of Lourdes Catholic Church and School (his family enrolled him at the parochial school in order to gain admittance to a large fish-fry hosted by the institution’s nuns). Although his habit-wearing tutors tried to get Huey to take up the collar of a higher power, the Cajun redneck settled for pursuing a more mundane source of influence: politics. He showed talent too, particularly since he had the relatively unique ability to appeal to both his peckerwood constituents and the more educated (if no less bigoted and selfish) campaign contributors. Indeed, one of his first noteworthy achievements was pushing the local polities to drain the marshland of Eden Island to make way for more ‘civilized’ (i.e., profitable) development.

This success, and the increased profits that began to flow through Eden’s canal, caught Cletus’ eye. Initially, he and his thralls at then-Cadillac Gage became Huey’s secret campaign financers, subtly pushing him to victory, first in county government, and then to a successful run for the Louisiana House of Representatives. After that, Cletus brought Huey more forcibly into his fold, ordering his childe Buford to ghoul him on the eve of his 1958 election to Louisiana State Senate. However, his term came at a tumultuous time. Although allying with Senator Rainach and the other supporters of the Massive Resistance movement, he failed to deliver on his campaign progress to thwart desegregation. Moreover, he blundered into a political land-mine when his long-time association with the Catholic Worker Movement made him equivocate on his support for the Vietnam War –which mirrored and exacerbated the growing rift between his domitor and his military-industrial backers and domitor’s sire. Indeed, this schism and the distance between Baton Rouge and Slidell led to Huey’s irregular vitae-diet and shaky bond.

However, it would be Huey’s choice of ties that ultimately led to his demise.

In the fall of 1962, Huey was returning from the parish seat of Covington to visit his kin in Eden Island. Yet, before he reached his destination, he stopped at the recently opened roadside diner, Big Chief Chopped BBQ. Unfortunately for Huey, he committed three sins during what become his terminal stop. First, he failed to order from the clan’s secret menu. Second, he picked a mulatto hooker from the local line-up. And third, and worst of all, he had forgotten to swap his Covington Choctaw blue tie for a Slidell Rebs red.

For such ‘crimes’, the enraged local patrons burst into the hookers’ trailer, dragged the senator back into the then-closed dinner, and brutally beat him to a pulp. The death-blow came when the redneck mob tipped Mushulatubbee’s giant statue on him, exclaiming “Yer finally da big chief, now, lil’ Huey!” The heavy totem-carving crushed his innards and trapped him under its bulk, where he slowly, painfully bled out –and onto the statue and the diner’s linoleum floor– but not before he cursed the God he had forsaken, his kin, and his unfulfilled ambitions.

The nascent ghost, however, soon discovered to his chagrin that, unlike his senatorial term, his service to Clan Giovannini had no limits. Cletus himself bound his spectral seed, furthering his loyal political machine on both sides of the sudario. Since then, Huey has served as one of the Giovannini’s primary patsies, front men, and spies amongst the Shroud’s local constituents. Additionally, his presence at the parish’s southwest border provides a pair of unsleeping eyes to watch over all those, dead or alive, that cross into or out of Cletus’ domain. When not so necromantically press-ganged, Huey idles his immortality by watching the local, living resident, Otis-Lyle, as the lad’s pyromania reminds the dead senator of his own childhood penchant for flicking lit matches into chicken coops. 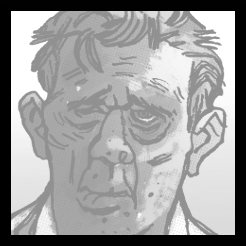