“It’s easier to fool people than to convince them that they have been fooled.”
—Mark Twain

“The house of delusions is cheap to built, but drafty to live in.”
—A. E. Houseman 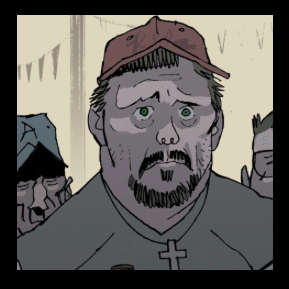 Homer-Berle Boggs looks like a dumb as rocks Dixie hick–because he is. The thirty-oddish old guy retains most of his muscular bulk from his first-string defensive lineman days at Slidell High, but a regular diet of fried frog legs, beer-kegs, frozen TV dinners, and bacon-fried grits have given him permanent ‘pads’ of fat. Balloon-headed, blue-green eyed, and pig-nosed, Homer-Berle’s face has a babyish quality notwithstanding his dirty-blonde mustache and goatee, which resemble the bastard children of carpet pilings and fuzzy caterpillars. Otherwise, his unrepentant hat hair is rarely seen, due to his constantly worn, well-beloved, decades-old Rebs cap, which he allegedly doesn’t take off even to shower during football season (assuming he does shower). Beyond his hat and a tin snips-cut cross he made in senior year metal shop, Homer-Berle’s clothing cycles through what can only be called Walmart white trash rack-wear and redneck haute couture: printed duck-hunting T-shirts, sleeveless midriff lifting shirts, stained sweatpants, denim daisy dukes, camouflage leggings (he prefers the term “runnin’ pants, ‘cause I’ll be runnin’ and pantin’ something fierce if the Great White Honkey comes a’chasin’ me”), muckboots, and a beer-can filled fanny pack decorated with his dead granny’s face superimposed over the Confederate flag.

Homer-Berle Boggs has a secret.

God talks to him.

God has a secret.

A redneck everyman, Homer-Berle Boggs had a normal enough life, at least for a Boggs. He was born in a beer-filled plastic kiddy pool–as his mother, Vicky-Mae, wanted “an all-natural, all ’Merican delivery”–and was raised in a crowded trailer that that had more wheels than the rusty trucks and tricycles that littered his bayou-adjacent lawn. His father, Garth-Bob, taught him the classics: beer belching, bullfrog hunting, and beating the snot out of his siblings and cousins before, after, and especially during their family’s backyard pigskin games.

High school brought the typical Slidell ‘storm and stress’. His older then-teen sister, Buffy-Sue, got pregnant behind the bleachers as the unofficial ‘half-time show’ of the Homecoming game against the Covington Choctaws. A year later, Vicky-Mae died from a hot shot when Buffy-Sue swapped her needles’ heroin with battery acid (allegedly after Vicky-Mae repeatedly stole Buffy-Sue’s WIC stamps). Garth-Bob did an eighteen month jail stint after claiming his company’s beer-truck was robbed at gunpoint–where in reality he used the company’s stock to re-supply a friend’s kegger ran out of everything except Natty Light. Garth-Bob’s guilt became obscenely clear after he and his friends posted to social media numerous pictures of the party and Garth-Bob’s ‘delivery’. Homer’s dad served another six months after getting drunk with his parole officer, then crashing his neighbor’s borrowed truck into a billboard for one of Mayor Wayne-Dwayne Duvall’s re-election campaigns.

Despite such chaos at home, Homer-Berle found some measure of success and stability at school–or more accurately after school as a Rebs’ defensive lineman. Content to follow his more confident , driven, and/or self-centered peers, Homer-Berle readily made friends, or at least avoided making any real enemies. During his junior and senior years, the Rebs made it to the Division I playoffs, clinching the parish title, and in his last year, they made it all the way to the state finals, losing by just 2 points to Shreveport’s Evangel Christian Academy. His team’s successes, and his consistent contributions to them, helped gain the young man a small measure of local acclaim–not quite fame, but at least acceptance and a sense of belonging and purpose.

Yet, when his senior season finally ended, Homer-Berle’s sense of both belonging and purpose withered like his manhood in an icebox. Although just a few months away from graduation, he dropped out of school; he was never going to college after all. After a few listless months of black-out partying and couch-crashing with various cousins and more extended family, Homer-Berle moved in with his older uncle-cousin, Homer-Merle, to help run his local bait shop and side-business pig farm.off Bayou Bonfouca. Over the next decade, the Homers became fast companions, sharing drinks, work, guns, dogs, money, and women (which increasingly became just an excuse to enjoy each other) when they weren’t being henpecked by Homer-Merle’s miserly aunt, ex-wife, and financial partner, Jeane-Jeane (whose parents were reportedly so stingy, or dumb, that they couldn’t spare but one given name for their daughter).

In 2005, Katrina wiped out their pig herds and flooded their bait shop with five-feet of mud and trash (but to Homer-Merle’s chagrin failed to take out Jeane-Jeane). Unable to salvage their operations, Homer-Merle came up with a ‘grand re-openin’ fundraiser fireside’ by selling ‘tickets’ to watch the Homers blow up their ravaged bait shop, home, and pig shacks with some questionably obtained military surplus explosives. Despite the large number of attending lawn chairs at the ‘event’, most Boggs attendees paid in (basically full) beer bottles, IOUs, spare coins, and condoms (which were being liberally passed out to the Boggs by aghast FEMA workers). Nonetheless the Homers made enough to rebuild a bait shop (but not pig farm) from the plentiful wood and metal scraps scattered over the parish. There, Homer-Berle and his by then common law ‘spouses’ likely would have faded into relative obscurity amongst the local white trash masses, had not two things happened in early 2011.

First, the Homers caught a 142-pound, 8 ounces blue catfish, which at the time was the world record (until beat by a 143 pound catch in Kerr Lake, Virginia approximately seven months later). Within a week of their momentous catch, Homer-Berle and Merle became a minor angler celebrity and both local and tourist business boomed at their ramshackle bait-shop. Against Jeane-Jeane’s strenuous protests, the Homers spent most of the windfall having their record-breaking catch sent to a taxidermy-electrician ‘specialist’ who mounted the giant catfish carcass and then wired it to a singing karaoke machine. To the Homers’ chagrin, their combined bait shop karaoke joint never caught fire, at least not figuratively (as there was the literal electric fire when the fish’s wire had a power surge during a fierce lightning storm).

Second, City Councilor George B. Borchet choked to death on a deep-fried snickers bar, leaving an open seat on the Slidell City Council. Smelling an opportunity, mayor and political machine boss Wayne-Dwayne Duvall held a special election the day after the city newspaper did a front article on Homer-Berle’s catch followed immediately by an article about the open council seat. Without ever so much as being asked to be put on a ballot, Homer-Berle, “The Blue Catfish King of Bayou Bonfouca” won the special election with a landslide.

Homer-Berle enjoyed attending city council meetings. As Wayne-Dwayne Duvall guessed, Homer-Berle had no real clue what most of the meetings were about and didn’t really care; he just enjoyed the sense of belonging and purpose. An excellent “team player”, the mayor was always able to rely upon the everyman redneck for his support during council votes. Some of the council members (particularly the non-Boggs) objected to the man whose only apparent qualities were catching a big fish, but most came to find the Homer-Berle disarmingly benign rather than ignorantly dangerous. Plus, he always brought and shared beer at the council meetings–and not bad beer either (as his daddy Garth-Bob hadn’t raised a complete savage). Initially, Homer-Berle expected to step down and let the “real politicians” run for the 2012 election, happy to return to Homer-Merle and their financially flotsam bait and karaoke shop.

‘God’ had other plans.

Already a nominally religious Southern man who regularly attended Reverend Wilbur’s tent and lawn chair revivals, Homer-Berle was awoken on the eve of the 2012 campaign announcement deadline by a ‘heavenly’ vision. In that vision, an angelic version of his departed mother, Vicky-Mae, rode a chrome-polished pickup truck with tires of flame. From that ‘chariot’, his mother declared that God had a special plan for Homer-Berle, one which required him to run for the city council seat. After giving Homer-Berle a ride in the blinding chrome pickup and letting him have an otherworldly sip of her ‘sanctified’ breastmilk, the ‘angel’ showed him his father and former abuser, Garth-Bob, being devoured by a red-haired devil riding a skeletal motorcycle, and told Homer-Berle the same would happen to him if he shared or failed to follow the special instructions from ‘Heaven’.

Homer-Berle awoke the next morning, his sheets wet in more ways than one, and found two text messages blinking on his cell phone. The first was from his sister, Buffy-Sue, telling her that their father was missing. The second was from a new contact: GOD, who had only typed two words:

Not needing further ‘proof’ of the divine mandate, Homer-Berle immediately approached the all-too happy mayor with his intention to run for the city council. Even with the mayor’s political machine, it was a fierce campaign, as George Borchet’s son, Bill, contested the seat and was backed by Gaylord Chemical’s coffers. When Bill’s campaign smugly promoted that Homer-Berle’s catfish record had been beaten by the Virginia catch, their campaign slogan changed to “Don’t Settle for Second-Best!” In reply, Homer-Merle (who had become his nephew-cousin’s campaign ‘manager’) responded by creating a video clip of Homer-Berle’s face crudely slapped over the already viral honey badger, and put Bill’s face as the eaten cobra. The crude but effective video went viral in Slidell (especially with Euless Boggs’ secret digital assistance), and the redneck’s new slogan of “H.B. Don’t Care.” became a city-wide mantra. In the end, local politics (with some ‘divine’ assistance) trounced reason and logic: Homer-Berle won.

Seeing his win as further proof of divine intervention, Homer-Berle was not completely surprised when ‘God’ called and congratulated him personally during the midnight celebration-kegger of his campaign victory. Since then, Homer-Berle has had two other ‘angelic visitations’, one to chastise him for telling Homer-Merle his secret (who thereafter inexplicably forgot their conversation) and another time to warn him not to speak to certain “heathen” FBI investigators. Otherwise, God’s communication has occurred strictly through text messages, which are typically only one-way conversations that generally pertain to performing some odd task or voting a certain way on city council meetings. Initially, Homer-Berle found it strange that God never talked to him on Sundays, but he’s since decided that that actually makes a lot of sense “as He’s done busy chattin’ wit e’erybody else”. Nonetheless, Homer-Berle has proven a faithful ‘mouthpiece’ for his ‘divine’ master and has found himself blessed with preternatural strength and health, for which he is grateful.

When not so occupied by such divine mandates, Homer-Berle “Honey Badger” Boggs spends his days visiting local shops, diners, and restaurants, sometimes alongside the mayor, but usually with Homer-Merle. This informal electioneering (which he just views as being a good team player and doing his job) has helped maintain his popularity (especially as he generally pays or at least brings beer unlike Mayor Wayne-Dwayne Duvall). At night, though, Homer-Berle spends his time with his partner Homer-Merle, their singing catfish, and a six-pack of anything other than Natty Light. All in all, it’s good life–if deluded–and Homer-Berle likely wouldn’t have it any other way. 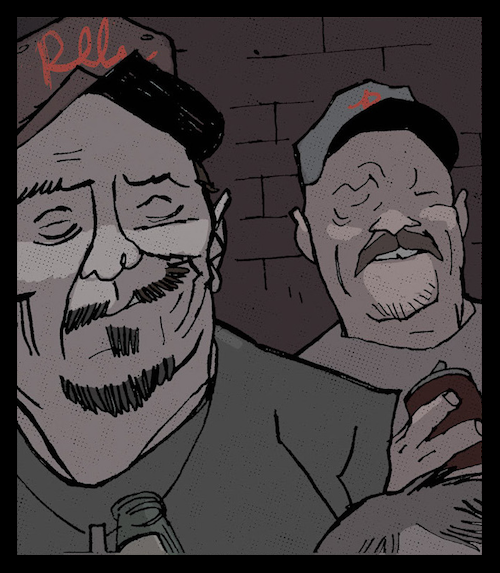 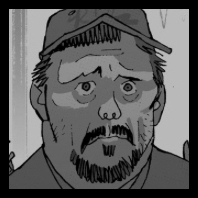