“Sometimes I wonder if Big Mon could think his way out of a wet bag, but I never question his loyalty. If I asked, he’d eat thumbtacks with a spoon. Sadly, I rarely ask him to do something so safe.”
—Louis Fontaine 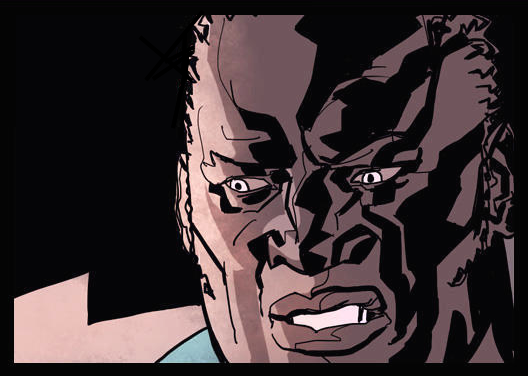 For the past decade, Hippolyte has operated his shoe-shine stand under the canopy of Hotel Monteleone. Built like a haystack, the Big Mon of Monteleone has sloped shoulders as wide as a bull’s, a neck like a fire hydrant, and upper arms like chunks of sewer pipes. His small eyes are an electric blue set in a coffee-colored face, crowned with oiled canerow braids and the occasional porkpie hat. Over his typical wardrobe of bright-hued guayabera and Hawaiian shirts, he wears an oversized grey smock, its pockets stuffed with brushes and buffing rags, ribbed with black and oxblood stains. The drawers under the two elevated chairs on the stand are loaded with bottles of liquid polish, cans of wax, and saddle soap, toothbrushes and steel dental he uses to clean the welts and stitches around shoe edges. He can pop his buffing rags with a speed and rhythm that never fails to command a silent respect from everyone who watches. The Big Mon of Monteleone catches all the traffic from the streetcar station to the hotel and Quarter beyond, shines all the shoes set out in the corridor at night, and guarantees you can see your face in the buffed point of your shoe or boot or your money gets returned. He customers include entire casts of Saenger Theatre productions, big band orchestras, US senators, Hollywood and literary celebrities, and the ever-changing droves of tourists.

When not shining shoes for half the French Quarter, Hippolyte lives in Tremé, where railroad tracks dissect yards and pavement and narrow paint-less houses sag in rows like bad teeth. There, he spends the majority of time sampling the menus of Brocato’s, Dizzy’s, and Tee-Eva’s or relaxing behind his house, where he likes to fling bird seeds from an umbrella-shaded barbers chair and watch the pigeons shower down from the telephone wires and swirl about his oiled head like snowflakes. In the sweltering heat that so frequently afflicts the Crescent City, the Big Mon of Monteleone mops his face with a blue rag from a filling station and guzzles sweetened iced tea from mason jars, his wide mouth cupping around jars’ openings like a catfish’s.

“The gates of Hell are open night and day; smooth the descent, and easy is the way: but, to return, and view the cheerful skies; in this, the task and mighty labor lies.”
—Virgil

Hippolyte was born to André and Ida Broussard in the 1956. Ida served as a waitress at Dizzy’s while Andre ‘worked’ as a pot hustler and floor-level house creep, leaving Hippolyte and his five siblings to run wild in the ghetto of their Tremé neighborhood, earning them the attention, if not ire, of the local beat cops. Ironically, these interactions, coupled with André’s murder by the mob in 1973, led to Hippolyte joining the NOPD. Over the next decade, he served as a beat cop and eventual assistant to a Homicide detective, busting petty thieves, rapists, out-of-line mobsters, and serial killers. Although he never rose in rank, his intimidating size and disarming smile earned him begrudging respect, if not fondness, by his fellow cops, local communities, and even criminals.

That respect and fondness would utterly vanish, however, when Hippolyte was arrested for assaulting none other than Vera Dyer, fiancé to Mathew Malveaux. Hippolyte claimed he was walking home when he heard a woman cry out for help. He responded, chasing off the assailant, and then returned to find the badly injured woman. Drawn by the same cries, other cops arrived shortly thereafter, and much to Hippolyte’s shock and dismay, Vera accused him of being her attacker. Due to the high profile nature of the victim’s family (and fiancee’s), not to mention’s Hippolyte’s race and profession, the case gained national attention. Eager to end that wildfire-level of scrutiny, and pressured by the Dyer and Malveaux families, the DA rushed Hippolyte’s case through the court, leading to his perfunctory conviction. Any doubt of Hippolyte’s guilt soon vanished when reports filtered from Angola suggesting the cop-turned-convict was involved in several bloody incidents, including the near-fatal beating of a guard and the shanking of not one, but multiple inmates.

A decade and a half later, however, Hippolyte would be exonerated for his original arrest when new evidence was brought forward that both provided evidence of Hippolyte’s innocence and the guilt of another. Already beset by a Department of Justice investigation into the Farm’s barbaric treatment of its inmates, the governor pardoned Hippolyte for his ‘crimes’ rather than wade through a media-frenzied retrial. So released, Hippolyte returned home to New Orleans only to find a city that neither remembered nor accepted him. Stonewalled from any attempt at rejoining the NOPD, the ex-cop, ex-con took up the brush and buffing rag and became a shoe shiner, living off of tips from the same patrons who callously tipped cigar ashes on his head.

Such is justice in the Big Sleazy. 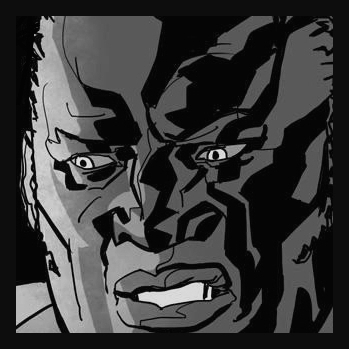