“Every bullet fired from the barrel of a police pistol was my bullet. If you call that murder, then I am the murderer.”
—Hermann Goering

“It is thus necessary that the individual should finally come to realize that his own ego is of no importance in comparison with the existence of the nation, that the position of the individual is conditioned solely by the interests of the nation as a whole.”
—Adolf Hitler

“You know who’s going to inherit the Earth? Arms dealers. Because everyone else is too busy killing each other. That’s the secret to survival. Never go to war. Especially with yourself.”
—Yuri Orlov

If there is a face for the banality of evil, it might well might belong to Franz-Dietlof Koenig. Rather than resembling a Nazi death cultist that he (or at least his family) is, the German ghoul looks like an overworked, underappreciated bureaucrat or middle-tier manager. Ash-blonde, heavy-boned, and creased with stress-born wrinkles, the Aryan arms dealer dresses in modern-day attire typical of American-European businessmen: conservative-colored suits, dress shirts, silk ties, gold and stainless-steel watches, and wingtips. Fluent in nearly a dozen languages, including English, French, Dutch, Spanish, Russian, Chinese, Arabic, Farsi, Dari, Bantu, and his native tongue, Franz takes pride in his Germanic accent. The insomniac’s bags under his eyes are a different matter.

Like Callum Dunsirn, Franz-Dietlof Koenig is a long-time plantation guest who serves as the ghoul liaison between the Boggs and his own Giovannini-adopted family. Unlike the blood-related Scottish bankers, the Koenigs are prominent German arms manufacturers (and secret death cultists). Shortly before the United States became involved in WWII, the recently Embraced Nazi supporters sent the just-ghouled Franz to Slidell to coordinate with the Boggs’ then-nascent arms manufacturing company, Cadillac Gage. Together, they engaged in the arms dealers’ time-honored tradition of selling to both sides of a conflict. After mutually reaping ridiculous fortunes from global warfare, the Boggs’ and Koenigs’ manufacturing enterprises remained in close contact, with Franz as their main middleman.

Consequently, Franz frequently flies back to the Fatherland (if for nothing else than to receive monthly vitae from his domitor), but is otherwise a permanent resident of the Big House. Unsurprisingly, the White Reich treat Franz as a celebrity, their own “real Nazi”. Contrary to this perception and some of their more rambunctious (but unsuccessful) attempts to press-gang him into the OMC, Franz was never an actual Nazi, or at least not the goose-stepping, Jew-murdering, SS member the bikers think he was. Instead, Franz was and remains a well-to-do businessman in a hands-off, middle-management capacity (albeit for a prestigious, filthy rich family of vampiric death cultists). Although he personally agreed with most of Hitler’s ideology and fluently quotes Mein Kampf, Franz has always considered principles to be a distant second to profits.

Despite this pragmatic perspective, Franz remains bitter about the Third Reich’s fall, as he believes Hitler’s defeat denied him the Embrace. Fortunately for the American-born Boggs, Franz primarily ascribes Hitler’s fall to the Fuhrer’s ill-conceived winter invasion of Russia–and the subsequent counterattack by the Soviets. As a result, Franz had a personal, as well as economic, stake in seeing the Americans defeat their communist rivals.

Yet, since the Cold War’s end, Franz has become somewhat listless, particularly after his original domitor fell into torpor and has yet to awake (his current domitor is his former domitor’s childe). Despite this relative malaise, Franz still regularly socializes with Cletus and his childer–and has long since adopted their practice of cannibalism (though the Aryan Koenig insists on eating only “inferior” races, and thus rigorously denies being a cannibal since he doesn’t eat his own “species”).

One thing Franz has not yet acclimated to in his home away from home is the weather. He particularly loathes Louisiana’s hellish combination of heat and humidity. Consequently, he tries his best to avoid spending any time outside or away from copious air-conditioning. Indeed, Slidell’s climate and topography seem like they were specifically designed to thwart the man’s only genuinely personal hobby: alpine skiing. (Not even death has eroded the man’s love for the famed skiing legend and former Nazi supporter, Christl Cranz.)

Due to his daily business dealings across the globe, Franz keeps odd, erratic hours. To facilitate these international, time-zone transecting transactions, the Koenig liaison has a well-appointed office next to his second-story bedroom. Despite such conveniences, the ghoul is often just one dull moment away from his next narcoleptic episode. 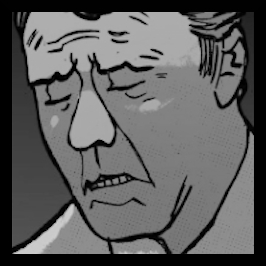