Emerson is tall, graceful, and seems built almost delicately until someone notice how well toned he is. He was not blessed with a bulky build, but he did the best he could with it before his Embrace. He keeps his short brown hair eternally and artfully messy. He’s usually seen in motorcycle leathers, the high-end armored kind. Sunglasses used to be another staple of his wardrobe, but there’s less need for those when you only drive at night.

Old money. The term conjures visions of white-pillared mansions on manicured grounds surrounded by cast-iron fences. That was the world Emerson Newhouse Hearst was born into. The very best schools. Million-dollar condos. Chartered helicopter flights. Lots of formal dinners. Being raised by domestic help instead of a mother and father.

The only thing Emerson claims to remember about his childhood is being bored. The ADHD diagnosis and lack of attention from his parents might’ve also had something to do with it. Unable to compete with his siblings academically, he acted out or just didn’t try, citing “boredom.”

Boredom still drove his studies, though, even if those studies were entirely outside the realm of what his parents wanted him to learn. He was more interested in urban legends than English. Math didn’t hold any appeal next to fast cars. Chemistry caught his attention, though, when he realized that’s how drugs were made.

Emerson’s parents carried him the entire way through high school. To bring up his low grades, they enrolled him in online classes they hired tutors to actually take the tests for while tutoring Emerson separately. His parents bribed coaches to say he was a top athletic recruit. They bribed exam proctors to let other people take standardized tests in his place. Their efforts got him into UC Berkley. Emerson suffered through college until his junior year, then bought a bike, dropped out, and just drove.

His parents threatened to cut him off. When he still didn’t come back, they threatened to disinherit him. Emerson just emptied everything from his bank accounts and took odd jobs when the cash ran out. He’d pick a direction every morning and take off, find a random hotel or motel to recharge at, then do it all again the next day. Life on the road was hard at first for the rich boy, and sent him to a hospital more than once, but he kept at it. If someone asked him about that period of his life, he’d say it was a better education than he ever got at college.

It was a cold winter night in 2012 when Emerson pulled into a rest stop in the middle of nowhere. Not a soul was visible for miles. When he finished in the bathroom, there was a woman he could only describe as “amazingly hot” checking out his bike. He hit on her and she laughed at him. Emerson took the rejection in stride until she said:

“I’ll make you a wager, ace. There’s a burned-out diner twenty miles east of here. I’ll race you to it. If you lose, I kill you. If you win, I’ll make you immortal.”

Emerson was thoroughly jaded by that point in his life. Where most of the friends he’d made on the road were bouncing in and out of rehab “like a balloon castle at a kid’s birthday party,” Emerson just did amazingly stupid things, on his bike and off it. Stunt driving. Maxing out his speedometer for the hell of it. Jumping around on high things (and calling it parkour once he found out about that). Not wearing a helmet, against the advice of older drivers, because he looked cooler without one.

He agreed to the bet. He could have said he didn’t believe the chick and that a race just sounded fun—how was a cute thing like her gonna kill him, even if she was crazy enough to go on about that “immortal” stuff. But the truth was, Emerson wanted to believe her. He didn’t care if he won or lost. Some part of him knew he couldn’t keep this lifestyle up forever. One way or another, he never wanted to grow old.

The woman was an amazing driver. She seemed even more heedless of her personal safety than Emerson and pulled off insane stunts no human should have been able to. But in the end, she underestimated his bike. No beat-up Kawasaki could match the power of his custom-built, lovingly maintained Ducati.

Emerson won. For his efforts, he was rewarded with a night of the most incredible sex he’d ever had—and his own death.

Emerson’s sire stayed around long enough to teach him the basics of his new condition. She also told him his mortal name was pretentious, but he liked it enough to keep using it. Then she took off, saying maybe they’d run into each other again some night. Eternity was a long time.

Emerson drifted from place to place, much as he had in his mortal life. He found that nomads like him were unwelcome in many princes’ domains. Caitiff nomads turned out to be doubly so. Emerson got into more than one scrap with local Kindred authorities, but always came out in one piece. He’d gone his own way in life and wasn’t about to bow to any so-called ‘prince’ in death. He came across his share of nomads who felt the same way. In a lot of respects, his existence wasn’t that different from before. He just knew old age wouldn’t be what killed him.

Mardi Gras drew Emerson to New Orleans in 2016. He’d been to the city several times before as a mortal and figured he’d enjoy the party even more as one of the undead. It was there he ran into Shep Jennings, who was impressed by Emerson’s driving skills and offered him a chance to “really stick it in the eye” of an asshole prince. Emerson figured what the hell.

Emerson doesn’t have Vidal’s permission to stay in the city and doesn’t much care. Against the hordes of other illegitimate licks in the French Quarter, he doesn’t particularly stand out. Unlike many of those licks, however, Emerson loves to drive his bike and isn’t willing to stay cooped up in the Quarter. He’s made a number of runs in and out of the city. He’s been told it’s probably only a matter of time until he runs into Caitlin Meadows.

He figures that’ll be fun.

As Emerson likes to say, his domain is “the bike in my hands and the clothes on my back.” He has no domain of his own, but Shep lets him feed in his territory.

Emerson has cultivated little in the way of formal influence. He never joined an OMC (“Why go through so much work to be someone’s bitch?”), but knows quite a few bikers, truckers, rest stop workers, and other roadsters who hold him in high regard. Emerson actually considers a number of these mortals his friends and holds a less disdainful attitude towards kine than many nomads do. As he likes to say, “Out on the road we’re all just trying to get by.”

Emerson has no standing among the Camarilla and doesn’t care that he doesn’t. (Camarilla Status 0)

The Anarchs, though, are impressed by his stories of sticking it to The Man across so many cities (not to mention surviving a nomad’s Requiem), and he’s acquitted himself well in some fights and other “games” (like who can drive a burning car the longest) that more reckless Anarchs like to play. He’s made a name for himself by safely running “city licks” to neighboring domains like Houston and serving as a guide for hire. For the right price, he claims he can get someone all the way down to Ushuaia (“That’s the southern-most city in South America”) in one piece. (Anarch Status ••)

Emerson is also a solid member of Shep Jennings’ krewe, the Night Axles. Cars aren’t his specialty, but he still finds a lot in common with the chop shop operator and sometime drag racer. (Night Axle Status ••)

Childe of Juana Sanchez. Emerson doesn’t know his lineage beyond his sire and doesn’t much care. In spite of that, he says he “knows for a fact” he’s of the thirteenth generation, but hasn’t ever explained why. 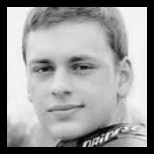