“Not four years, but for life.”
—Countless greek life orgs

“I guess I’m just kind of curious how someone can go thirty years as a vampire and their biggest claim to fame is ‘did a keg stand.’”
—Jade Kalani 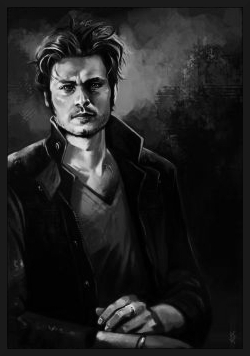 Jacket with the sleeves ripped off under the elbows. His face, eyes meaner than a gator’s and a sneer that could shame a rattlesnake, all framed by a shock of dirty blond hair, is like one of them internet pictures folk can’t agree on—most Anarchs like to say that “if you don’t want to fuck Duke within the first ten minutes of meeting him, you’ll probably be idly thinking of ways to murder him.”

Duke was born to privilege in Birmingham, Alabama. He went to Tulane in the early ‘80s despite so-so grades because he was a killer athlete and because his wealthy father had also gone there. Duke’s coaches held his hand over the next four years and made sure his professors realized how important it was for the football player to do well in their classes. Despite his coaches’ hopes, Duke had no plans to play professionally after he graduated: he just enjoyed the game for what it was, and for the fact it let him get away with things that would’ve landed a non-athlete into trouble.

Where Duke truly excelled, beyond academia and even football, was greek life. Although he hated being a pledge, he loved the idea of initiating them himself even more. Once those teeth-grating weeks were over, Duke swiftly rose through Phi Gamma Delta’s ranks to become pledge master. The Deltas never had a better one—or worse one, if you asked the pledges. One boy transferred to another college after the hazing he endured. Several other boys wound up in the hospital, but they didn’t transfer out. Some people thought Duke’s father bailed him out of trouble, but they didn’t see how those pledges wound up some of Duke’s most ardent defenders after how thoroughly he’d wrapped them around his thumb.

Duke rewarded his one-time pledges for their loyalty with officer positions once he became chapter president. Frat officers who hadn’t endured Duke’s hazing, or who had and didn’t try to stay on his good side, were swiftly forced out of the Deltas. Duke’s tenure as chapter president was marked by minimal scholastic and community service involvement, but an extraordinary number of sexual conquests (football also helped the rape allegations go away) and alcohol-fueled misadventures that his frat brothers swore they’d remember for the rest of their lives. The only person who complained was the pledge master, who felt that the chapter president stole a lot of his thunder.

Those four glorious years came to an end all too soon. Duke had vague plans to attend law school or get an MBA and would probably have done one of those things if an even worse predator hadn’t offered Duke his fondest wish: never needing to.

Duke never once regretted his Embrace. Although he grudgingly left Tulane at the behest of his sire Pinch, frat culture at neighboring Loyola was identical to his alma mater’s. He took several of his closest frat brothers with him. Although they initially didn’t want to transfer (Tulane was the better school), they changed their minds after realizing they loved what came out of Duke’s veins more than any beer keg. In short order, the young Brujah and his ghouls were in charge of another fraternity. The pledge master who ignorantly tried to haze them dropped out and was never seen again.

After four years of revelry at Loyola, Duke enrolled at Tulane again. After another four years, he was back at Loyola, his same frat brothers still in tow. So it went for decades. Duke didn’t attend class, so professors never saw him there, and the student body was replaced with fresh faces every four years. It was the perfect setup. Meanwhile, Duke’s contacts grew with every graduating class and gave him access to educated kine in a variety of professional fields, many of them from influential families. Most Kindred believe this was the reason why Pinch, with whom Duke shares almost nothing in common, Embraced the young man.

Elysium, however, proved less to Duke’s taste than frat life. The young Brujah’s narcissism and lifelong sense of entitlement were only magnified by his Embrace. His inability to comprehend himself as anything but the most important person in the room, coupled with his clan’s poor self-control, led to some severe humiliations during early visits to Elysium. He thereafter attended only grudgingly and at the behest of his sire or Dominique Toutain, the Ventrue regent of Riverbend.

In time, Duke came to resent both elder vampires. They expected him to do favors for them, punished him when frat-related incidents wound up in the news, and gave seemingly nothing in return. When another neonate pointed out that hunting and influence rights at Tulane was a considerable privilege, Duke only saw it as someone else claiming to give him what he’d always been entitled to. His initiation into the Invictus felt too much like a hazing ritual, too, even if it was less physical, and none of his fellow Kindred treated him with the same fear and sycophancy as hapless college students. Given the choice, Duke would have probably been happy just to spend eternity hopping between campuses and never laying eyes on other vampires.

Katrina forced Duke out of his domain, like it did everyone. As one of the Invictus, he got to make the 80-mile trek to Baton Rouge (whose prince welcomed “refugees” belonging to the First Estate) instead of the more dangerous 300-mile one to Houston. Duke earned a scar fighting a werewolf and caught Pierpont McGinn’s eye for handling himself well: the young Brujah had a lot of anger to vent out. He did not mourn Toutain when she perished during the storm. He’d never liked being subordinate to a woman anyway.

There was no question Duke would come back to the Big Easy. Its college campuses were what he knew. Things were different now, though. With Toutain ashes in the wind, Donovan had assumed regency over Riverbend. The sheriff had a “dialogue” with Duke about his future role in the parish, and the young Brujah was perhaps never so terrified in his unlife. He promptly converted to the Sanctified faith, now rarely speaks with his sire, and jumps to obey whenever his new master has orders. Sometimes these are to supplement the hounds’ numbers as a bullyboy, which Duke enjoys a great deal. Most Kindred see him as little more than Donovan’s toady.

Yet none would say Duke is not an excellent monster in his own right; the frat parties of Tulane are legendary, and Sanctified Kindred who attend are often impressed with the inventiveness of the torments he visits upon his victims, even if he’s less than picky about making sure they’re sinners. Pledges are always willing to debase themselves for the Greek King’s approval, but he reserves his worst depredations for the women his “brothers” bring to house parties.

Some things never change with death.

Duke prefers to spend the vast majority of his time on Tulane’s and Loyola’s campuses (depending on which college he’s enrolled at). They’d be choice feeding grounds even if he’d never been Embraced, college campuses and frat rows being what they are, but Duke hasn’t spent the past 30-plus years idle. His control of the various greek life organizations, especially the fraternities, has helped make Tulane and Loyola into very friendly feeding grounds to vampires.

Duke himself loves nothing so much as hunting. He rarely feeds on male students.

Some of Duke’s original frat brothers from 30-some years ago are still at his side. Others have died at the hands of hunters, Katrina’s hazards, and even Dominique Toutain to punish him for an early Masquerade breach, but Duke can always recruit more like them. They’re a pack of loud, bullying, and sexually hungry predators who relish being eternally young and lording their gifts over people with less power than they have. They hang onto Duke’s every word and are quick to jump whenever he gives orders. Duke uses them to run his fraternities (after all, some of greek life happens during the day) and as muscle. He’s had a few of them go through ROTC programs to learn how to handle themselves in fights.

Duke adopts a new identity every four years when he moves between campuses. A determined enough investigator might be able to track him down, but that’s true for any mask. So far he hasn’t had any problems and finds it highly convenient that Tulane and Loyola are so close by.

Duke is the Greek King and the eternal (if secret) president of Riverbend’s greek life organizations. The combined power and connections of the organizations he controls via his secret society of ghouled frat brothers extends to many corridors of power, allowing him access to high-profile kine without having to do more than pick up a phone.

Duke fears Donovan like nothing else, but respects him too. He runs a tigher ship than Toutain, and also isn’t a woman.

Duke largely stays out of the way of cerebral-minded Kindred like Philip Maldonato, Coco Duquette, and Erwin Bornemann who frequent “his” universities for their scholarly resources. The three want completely different things than he does, and they’re too old for him to bully, so he’s content (enough) to just leave them alone.

Younger licks who hunt at Tulane and Loyola for any amount of time inevitably run into Duke. He’s known to frequently lock horns with Roxanne Gerlette. They’ve gotten into more than one dispute over hunting from one another’s domains: Duke rolls his eyes at the “religious girls” whose spiritually Roxanne seek to foster, and loves few things more than to “despoil” them. Both of them know Donovan has little tolerance for infighting, though, and try to control themselves.

Outside of Riverbend, Duke is known to enjoy the company of Pierpont McGinn and Christopher Guilbeau. He sometimes acts as a leg-breaker for the former, who holds the WASP Brujah in relatively high esteem. McGinn is probably the only thing still keeping him in the Invictus.

Duke has made a minor name among the Sanctified for his activities on Tulane’s and Loyola’s campuses and for his service to Donovan. While he isn’t terribly discerning in the sinners he targets, Duke’s superiors believe he does a more capable job “scaring straight” any college student who strays from Christ’s path during their first years away from home. (Lancea et Sanctum Status •) Otherwise, however, Duke has little reputation among his fellow Kindred to speak of. (Brujah Status 0, Camarilla Status 0, Invictus Status 0)

When Jade Kalani displayed a pornographic video of Roxanne Gerlette at Elysium, Duke challenged its authenticity. While few doubt he was happy to see Roxanne embarrassed, he probably hoped to curry Donovan’s favor coming to his fellow vassal’s defense, just wanted to put down another vampire in front of the harpies, or both. After Jade’s entertaining display won their favor instead, he stalked off to sulk.

Duke is the childe of Pinckney Benton “Pinch” Stewart Pinchback, the first black governor in the United States and an Invictus vampire of middling standing. Pinch is childe to Annie Pope, one of New Orleans’ earliest and most storied Anarchs, but who grew increasingly sidelined by Coco Duquette and Miss Opal before winding up in Antoine Savoy’s camp. Although renowned as one of the city’s physically strongest vampires and most capable warriors, she perished during Hurricane Katrina. Annie’s sire is unknown.

Duke’s elder brother-in-blood Jacob Almerson was an Anarch who supported the attempted 1967 Carnival Coup by Anarchs from the California Free State to overthrow Vidal. After their failure, he was executed for his complicity.