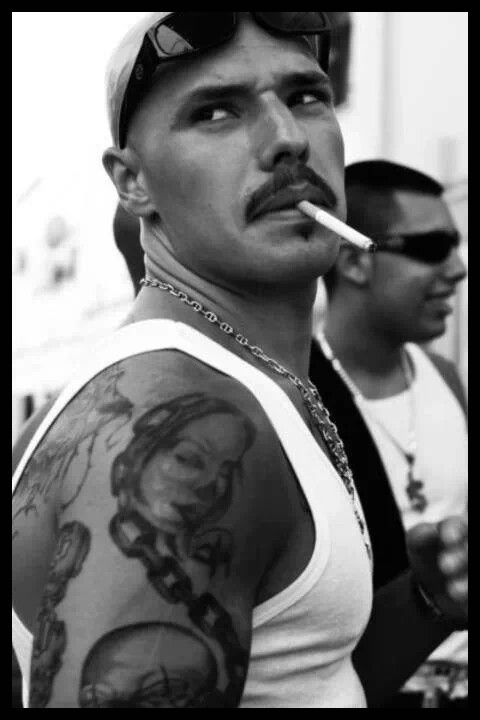 Imposing, intimidating, and physically impressive, Diego looks the part of the tough that he is, complete with scars across his body, full-sleeve tattoos, and a shaved head. Diego thrives on that physicality, makes his living off of it, and thoroughly enjoys it. His bulging biceps and ripped chest are no accident. He genuinely enjoys the fact that his appearance causes mothers to hold their children more tightly and husbands their wives. He works quite actively to maintain his physique, especially in his upper body. Typically dressing in tight tank tops or t-shirts and jeans, Diego is rarely seen without at least a knife on his belt, and more frequently has an illegal firearm tucked in his belt. Both his shirts and jeans are often stained with grease, oil, blood, or some combination of the three, and his knuckles are battered and bruised from street brawls. The gold cross around his neck is more than a little ironic, but his faith is genuine if perverse. That same charisma that makes him a successful violent criminal also makes him intensely attractive—there is a bearing and strength that puts him a cut above most.

Born the son of a cartel enforcer and his peasant wife, Diego was set upon a dark path early in his childhood, brought along by his father during several of his violent jobs and forced to partake of them in an effort to toughen him up. He was six when his father demanded he execute a pleading man on his knees with a revolver, and some of his earliest memories are of his father hacking apart corpses with machetes and chainsaws. His mother was a flexible enough Catholic to accept her husband’s occupation if it meant escaping her previous life, but found she could not bear to see her son immersed in that same lifestyle. She resolved to do something about it.

Diego was eight years old when his mother arranged him to travel to the United States with a coyote, an illegal immigrant from Mexico with his five-year-old sister (Carla Rivera) and herself (Karla Rivera). His mother hoped to find a better life for herself and her children across the border. Instead she the United States a harsh and unfriendly place, one in which she was forced into menial jobs, was regularly raped by her coyote under threat of disclosing her location to her husband, and lived in constant fear. Diego still remembers her mother’s frantic whispers in the night when the weathered and wiry man showed up on their doorstep, remembers getting woken up and hustled out of the bed the three shared, remembers the grunts and labored breathing behind their cramped apartment’s only door, and the fresh stains on the mattress the next morning: blood and other less recognizable fluids. He was old enough to know what was going on, though his sister was not.

The experience and knowledge deeply embittered the already mentally scared young man, and before long he was following in the footsteps of his violent father, a longtime cartel enforcer renowned for his brutality and cunning. Turning first to violence at school—which in turn only created more pain and trouble for his mother—it was not long before Diego began to immerse himself in the gang culture of Houston, slinging drugs on the street and breaking into cars and lockers at school. Having already seen, and even participated in, brutality the likes of which most American teenagers could not conceive, it was all-too easy for Diego to earn the respect and fear of his criminal peers. His mother lived in as much terror that the boy would get picked up by the police and deported as she did that her husband would show up at her home to kill her for ‘stealing’ their children. Ultimately her fear of both—and her constant abuse by the coyote that smuggled her across the border—led her to take advantage of the chaos surrounding Hurricane Katrina, the arrival of the refugees from New Orleans, and the subsequent return to the city by most to cover her own flight to the Big Easy with her children, dragging Diego kicking and screaming along the way.

In New Orleans the family discovered new troubles, but as a whole found their quality of life substantially increased. Distanced from the Mexican gang culture of Texas they were more sheltered from Diego’s father and Diego’s own illegal activities, though the boy continued to act out even as he grew into a man. Diego only barely graduated from high school—then only for his younger sister—and immediately fell in with the criminal underworld. He worked as an enforcer, a carjacker, a strong-arm-robber, and a cleaner, quickly developing relationships across the criminal spectrum.

At the same time, Diego is more than the sum of his (mostly) violent work. Despite his occupational violence he can be a disarmingly gentle man with his sister and her children—whom he quietly supports as they need and is terrifyingly protective of.

Caroline maintains an intentional distance from Diego, viewing the brutal, skilled, and charismatic gangbanger as a necessary, rather than desirable servant. She doesn’t hate him, but nor does she desire his presence, and while she does not outright ignore his inputs, nor does she heed or seek his every warning and advice. At the end of the day he is, in many ways, a tool. A very dangerous and potentially useful one, but a tool nonetheless.

Diego, in contrast, is enraptured by the bond. His passions run hot to begin with, fierce and Latin, and he struggles to resist them even as he is pulled towards the degree of respect often accord culturally to women by the Latino community and his own more restrained and respectful attitude cultivated by his single mother and single mother sister. He desires Caroline, and Caroline’s company, in more ways than one, even knowing she is an unholy abomination, and her distance (which he attributes as much to their different social status and background as anything else—his perception warped by the bond) drives him to achieve more, to do more, to become more to impress her. Already proud, his seeming inadequacy is a mark of shame, and one he holds more against himself than against her. He wants to be worthy of her, wants her to love him, wants something more.

Among his gang, reports of his relationship with a white girl across the river have leaked out. Most attribute it to some rich white girl dipping a toe into the criminal element on a whim, rather than something of his true nature. Some good-natured ribbing slip out now and then about how he’s seemingly ‘fallen’ for some ‘gringo chica’, but it’s largely just that: ribbing. The Cottonmouths as a whole, while skeptical about Diego’s long term prospects, respect the idea of family, and the idea of a life beyond only the gang. They largely bite their tongue as he slips out into the city proper for his ‘liaisons’ with her.

To every real southerner the cottonmouth is known as a dangerous, aggressive, and belligerent species, perhaps more than any other. It gives no warning like a rattlesnake and does not retreat as do copperheads. Instead stories abound of the species striking with little warning, and actively pursuing humans. More than a nuisance, they are a menace, one often met with shovels and shotguns. If only it were so easy for the NOPD to deal with its own Cottonmouth problem.

Local to New Orleans Parrish, and flourishing in the increasingly (but multi-ethnic) Hispanic Terrytown, the Cottonmouths are only one of the many Latin gangs with ties to the Crescent City. Flourishing along the banks of the Mississippi, much like their namesake, the Cottonmouths have violently pushed further and further into Algiers over the last decade: invasive transplants pushing back against decimated African-American communities never rebuilt after Katrina. A great deal of the violence that plagues the historic (and historically poor) district can be laid at the feet of conflicts between the Cottonmouths and rival (often historic) black gangs. For the most part the police do their best to turn a blind eye to the conflict between the poor minorities, as long as it doesn’t spill across the Mississippi, but some of the more brutal incidents have been impossible to ignore, and between historic creole imagination and the savagery that many Cottonmouths have brought forward from third world hell holes like Mexico, Columbia, and Cuba, their turf wars can grow incredibly violent.

For the most part the Cottonmouths deal in coke and pot, brought across the Gulf of Mexico by Cuban and Columbian contacts of various gang members. When necessary the gang is happy to wade out into the swamps in the south of the city, down to Lake Salvador, Little Lake, or Black Bay, to make pickups from cigarette boats that speed past the hulking Coast Guard cutters that try to cut them off. That interest however is not limited, and their more violent members are not adverse to all manner of illicit activities, especially outside of their home turf in Terrytown. They’re eager to expand their reach, and in particular the richer and greener pastures across the Mississippi call to them.

What makes the Cottonmouths distinctive, beyond the relatively new influence of Latino communities in the region, is their businesslike approach to what they do. They’re thugs, criminals, drug dealers and killers, but for most of them their activities are a job. As with many Latino gangs, when they return home, it is to dedicated families. To wives and households full of children, instead of broken homes and whores (though many, certainly, keep mistresses on the side). It makes them if not morally superior to many of their peers, then certainly institutionally more sound and grounded. Associated with other Latin gags out of Kenner, the other Latino stronghold in the city, though geographic proximity keeps them from growing too close—or from stepping on each other’s toes.

Diego’s sire is unknown, possibly even to him. Julius B. Baudoin exchanged no words with Diego during their violent meeting, but tasted from the torpid neonate’s blood that he was of Clan Brujah. 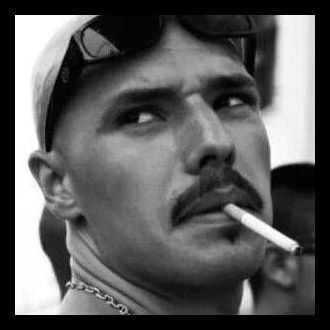