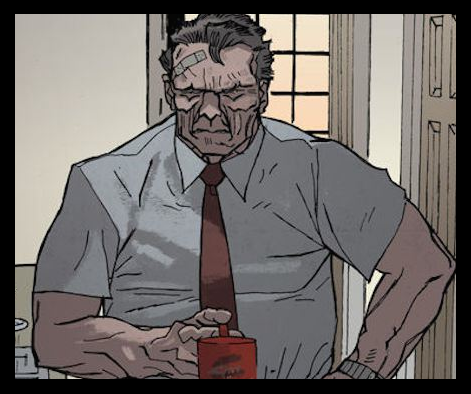 Calhoun gained his nickname from his life-time habit of chugging Budweiser beers before smashing the emptied cans against his skull. While Calhoun still consumes Budweiser like it’s air, age has mellowed the almost seventy-year-old, such that he now prefers drinking his booze in a cup, rather than from a can. Indeed, he’s rarely seen at work without his red coffee mug, a birthday gift from Wynona emblazoned with the words: “World’s Best Husband-Dad.” Yet, regardless of which container he uses, Budd still bashes his empty beer cans against his brainpan.

Whether a hold-over from his military days or the byproduct of his job’s requirements, Calhoun is one of the few Boggs that dresses with a modicum of modern civility. Though vehemently abstaining from any sort of sports coat or jacket, Calhoun typically wears short-sleeved dress-shirts, Rebs football ties, gator-skinned boots, and business slacks ironed with bayonet-sharp creases. Once at home, Calhoun commonly sheds his work clothes for an appropriately named wife-beater, horribly stained whitey-tighties, and man-skin slippers. When feeling particularly formal, the gray-haired sexagenarian even dons a robe. On particularly special occasions, the robe is hooded and white. Like many of the Boggs, Calhoun has been a lifelong member of the Klan.

One of the most publicly influential members of the Boggs clan, Calhoun Boggs sits on the directors’ board of Textron Marine & Land Systems. As the previous CEO of Cadillac Gage, Calhoun led the 1994 merger with Textron that preserved not only the Boggs clan’s multi-billion dollar fortunes, but also ensured that Slidell remains one of the world’s foremost military-industrial mass producers of death.

Prior to such weighty, if worrisome, achievements, Calhoun served in Vietnam. Unlike so many of his “bra-burning, pussy-bellied” generation, Calhoun voluntarily enlisted in the Army, and then completed not one, but three tours in Vietnam. There, Calhoun became intimately familiar with many of the same weapons manufactured and sold by his kin back home. For most of the war, Calhoun served in the 1st Battalion, 20th Infantry Regiment, 11th Brigade of the 23rd Infantry Division. His most well-known, but far from worst, war-time atrocity was his personal involvement with the Mỹ Lai Massacre.

Although such deeds vilified him in the eyes of most of the world, they simultaneously made Calhoun a war-hero upon his return to Slidell. In fact, after his 1970 court martial for his participation in the Mỹ Lai Massacre and subsequent acquittal, Calhoun was made mayor of Slidell, even though he never declared his candidacy. Following his mayoral stint, Calhoun returned to Cadillac Gage to make, rather than use (professionally at least), guns, tanks, and carriers. His hostile, take-no-prisoners approach to business made him perfectly suited to management, and he (with Cletus’ shadowy and sometimes not-so shadowy aid) climbed the corporate ladder, till he eventually became Cadillac Gage’s chief executive officer. He’s served in the role ever since and has no plans of retiring.

In addition to his duties as CEO, Calhoun currently acts as the Grand Giant of the Ku Klux Klan in St. Tammany Parish, and belongs to an exclusive, executives-only branch of the Knights of the White Camelia. Unlike some of his fellow Klansmen, Calhoun has a relatively accepting view of blacks. Indeed, he views them like beloved pets: beings you feed, shelter, and can even love, so long as they remember their place. Instead, Calhoun reserves his hottest hatred and violence against the “infestation of foreign pests:” immigrants. Calhoun and his Slidell Klansmen care little whether such individuals are legal or illegal. Either way, their attitude is simple, if barbaric: pests are fit only for extermination or bait.

Calhoun’s first wife and mother of his second was Shirlene-Sue. Approximately thirty years ago, Shirlene was murdered by Cletus, drained dry and half-eaten in front of the then-child Wynona-Lynn. Whether Cletus killed the woman in the throes of frenzy or just for sociopathic shit-and-giggles is anyone’s guess. What is known is Calhoun’s reaction when he came home and found his old maid dead. Rather than being enraged or distraught, he was delighted (“Grinnin’ like a possum eatin’ a sweet tater”)–particularly after Cletus presented Wynona as his new bride-to-be.

Like most of the Boggs, Calhoun has a large, if confusing, line of offspring. Unlike most of his clan, Calhoun can typically be bothered to remember all their names. Notable progeny include his wife Wynona-Lynn, her siblings Audrey-Mae, Elrod Bocephus, and Floyd Mason, and Wynona’s brood, which include John-Boy, Junior, and Bubba Jesus. 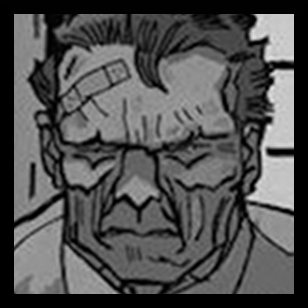