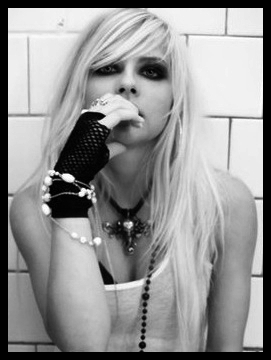 Bliss Jackson has a problem.

That’s the impression most people get when talking to the perennially pissed-looking young Brujah. She’s not actually that short for a woman, but she is shorter and slighter than her krewemates, who’ve taken to calling her “Short Fuse” as a result. In her better moods, she tells them to knock it off. In her worse moods, she knocks it out of them. She usually wears leather jackets, torn shorts and jeans, and fishnet gloves and leggings. She has a favorite wifebeater with “IT’S A BOYBEATER” written across the front. When she feels like throwing on makeup, usually when she’s on the hunt, it’s heavy blacks and reds that dare offended old people to call her a brazen strumpet.

Bliss was the shame of her grandmother’s life and the inconvenience of her mother’s. Born to an alcoholic mother and unknown father, she was raised in an impoverished Cincinnati household by absent or aging caretakers. She soon learned the only person who’d take care of her was staring her in the mirror every morning.

Education seemed like a waste of time without parental encouragement. Teachers and grown-ups with the kindest intentions spoke about a middle-class white picket world that meant nothing to her. Poor grades, a long disciplinary record, and a stint in juvenile hall morphed into drugs, drinking, hard partying, and serial truancy as she got older.

By the time she was sixteen, Bliss had lived up to her grandmother’s worst fears and earned herself the kind of reputation a girl doesn’t lose. She crowned it all off by falling for the wrong guy and dropping out of high school, swept away by the belief that someone could save her. She left Cincinnati on the back of his motorcycle and never looked back.

They only got as far as the nearest cheap motel before Bliss lay dying of a heroin OD in their room. The wrong guy looked down at her, sighed, then slashed his wrist and pressed it to her mouth.

Bliss’ sire Jaime had originally intended to keep her as a ghoul, but something in the dying young runaway moved him to pity. Undeath and its accompanying urges did not agree with the already emotionally volatile and misbehavior-prone teenager. The Brujah blood made it worse. Bliss lost herself to the Beast so often that Jaime wondered if wassail would claim her, and whether leaving her to die from a heroin OD would have been kinder. But he always thought back to that moment, the sound of the insensate teenager’s shallow breathing, and what a tragic waste it seemed to let her die in a cheap motel room like that.

Bliss wanted her sire to save her, but could sense he was no less damaged than she was. He’d been run out of the California Free State, where he’d been Embraced, for “burning too many bridges” and would elaborate no further. He seemed incapable of trusting anyone and Bliss wanted her savior to let her in. He had saved her, hadn’t he?

Sire and childe achieved some good (or at least mitigated worse harm) staying together: Jaime could restrain Bliss during her frequent frenzies rather than letting mortals pay the price. He taught her about the Masquerade, how to hunt without killing, and the other basics of Kindred existence. But the relationship was too dysfunctional to last. They fought, often violently, and were ran out of towns they passed through. Eventually, one of their fights drew the wrong kind of attention, and Jaime was destroyed by vampire hunters. Bliss was once again left to make her own way in the world.

She was used to that.

Bliss wound up in New Orleans for Mardi Gras and acquitted herself well in battle against some Sabbat. She made friends with a few other Anarchs who successfully petitioned Philip Maldonato to let her stay in Mid-City permanently. Bliss spent her remaining years in the Crescent City as the quintessential angry Anarch. She filled her nights with partying, feeding, and fighting. Her krewe, Eight-Nine-Six, earned a reputation as the most violent (though not most powerful) Anarch gang in the city.

Bliss never seemed any less pissed off for it. Everything felt vaguely hollow, and in her more loquacious moods (usually after feeding on a vessel with weed in their system) she would ask her krewemates if this was all there was. Some of their answers were more sympathetic than others, but none of them were particularly enlightening.

Coco Duquette spoke eloquently at rants about systemic injustices, why the world was the way it was, and conflicts and philosophies dating back to ancient times. The elder Brujah’s words simultaneously resonated and left Bliss feeling strangely inadequate.

Coco suggested she take a class or two at Delgado. The primogen had made it very easy for Anarchs to enroll at the community college in her domain; she believed there was inherent benefit in educating neonates who hadn’t been to college. Bliss attended one class. Coco’s decision to also attend probably saved the instructor from a trip to the ICU.

Education was another failure. Bliss looked for other places to make herself whole. She and her krewemate Trent Ambrose, a Toreador graffiti artist maligned by his clan, pursued a relationship that was marked by cycles of passion, finding things to get angry over, violent arguments that usually escalated into physical altercations, and then tearful reconciliation. Bliss kept hoping Trent would save her, but not even she could say what she needed saving from.

Bliss and the rest of Eight-Nine-Six have carved out a modest chunk of territory in Mid-City that included the Rock-n-Bowl, a combination music venue and bowling alley. The krewe deals violently with trespassers.

Bliss does not keep ghouls, citing that “juice makes them pathetic.”

Bliss has no significant influence over mortal society. Some of the business owners in her territory know she is dangerously unstable and not to be crossed. Although she looks like a teenager, she never gets carded at bars and clubs.

Bliss has carved out a minor name among the Anarchs and her clan through a simple means: violence. She picks fights with anyone who pisses her off, even if they’re older and stronger. It’s crude, but it works. Bliss’ standing in the larger Camarilla, however, is negligible. (Anarch Status •, Brujah Status •, Camarilla Status 0)

George Smith met Bliss when he was looking for neonates to serve as companions to John Harley Matheson in his exile. Bliss threw over his desk, destroyed some of his possessions, and railed against the Ventrue ancilla for his complicity in the banishment of several of her friends from New Orleans. After all, they’d been exiled for violating the sanctity of Elysium in his hotel. George calmly answered the Brujah’s accusations, explained why he was blameless, and offered to throw Eight-Nine-Six a party at his hotel. It was a testament to George’s social graces that Bliss accepted his invitation. The pleased hotelier began considering how he could manipulate Bliss’ anger towards his own ends, though later events would subsequently claim both George’s and Bliss’ attentions.

Caroline Malveaux-Devillers ran into Bliss when she witlessly poached in Eight-Nine-Six’s territory. Caroline beat the Brujah’s head in like a pumpkin during the ensuing melee and left her in torpor. Bliss was subsequently pulled away by one of her krewemates and stashed in their communal haven.

Shortly before her altercation with Caroline, Micheal Kelly invited assorted Anarchs to his bar in order to suss out their feelings on the recent accusations leveled against John Harley Matheson. Bliss attended and punched Micheal in the face for reasons that made little sense to the older Brujah. He told her to get out, but tellingly did not otherwise meaningfully retaliate. Bliss boasted to her krewemates that she’d punched out Kelly in his own bar, foreshadowing his later status as a paper tiger following his humiliations at the hands of Cletus Lee Boggs and the Giovannini’s mortal kin.

Bliss remained in torpor during Eight-Nine-Six’s subsequent (and fatal) clashes with Caroline.

A still-torpid Bliss was present at the the Trial of John Harley Matheson along with Eight-Nine-Six’s other three members for alleged violations of the Masquerade during a street battle.

Ironically, Bliss was innocent of this charge, having been torpored by Caroline before her krewe’s last battle. Bliss’ only crime was defending her domain against an intruder. Vidal, however, still chose to order the young Anarch’s final death alongside the rest of her krewe. Doubtless, once she awoke from torpor, she would have been furious at the prince and all-too susceptible to recruitment by Antoine Savoy (whose followers’ ranks had been newly swollen with angry Anarchs). Bliss was summarily executed by Donovan.

In the end, there was no one to save her.

Bliss was childe of Jaime Collazo, a Brujah Anarch from the California Free State who fled the region after “burning too many bridges.” He met final death at the hands of vampire hunters. Bliss had no idea who her ancestors were beyond her sire and didn’t particularly care.

Bliss had no idea whether her sire Embraced other childer or not. She didn’t particularly care there, either.

Bliss Embraced a single childe before she came to New Orleans: Milagrosa Arencibia, a gangbanger who reminded Bliss of her own sire. (Vidal almost certainly would not have granted the several-year-dead Anarch permission to Embrace in his city.) Milagrosa founded Eight-Nine-Six together with Bliss and met final death when the krewe was destroyed. 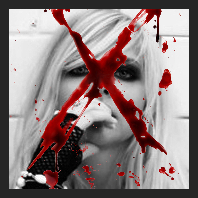