“The way of nature has always been to slay the hindmost, and there is still no other way, unless we can prevent those who would become the hindmost being born. It is in the sterilization of failures, and not in the selection of successes for breeding, that the possibility of an improvement of the human stock lies.”
—H. G. Wells

“The pursuit of origins is a way of rescuing territory from death and oblivion, a reconquest that ought to be patient, devoted, relentless and faithful.”
—Amin Maalouf

“It is better for all the world, if instead of waiting to execute degenerate offspring for crime, or to let them starve for their imbecility, society can prevent those who are manifestly unfit from continuing their kind… three generations of imbeciles are enough.”
—U.S. Supreme Court Justice Oliver Wendell Holmes Jr., Buck v. Bell 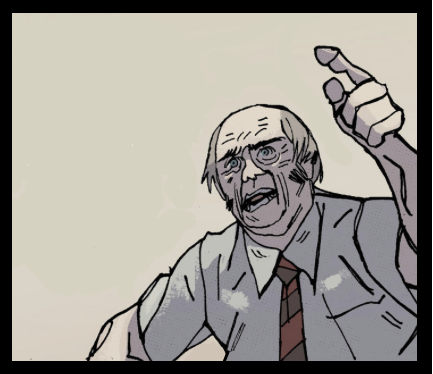 For all his ardent rhetoric and quasi-scientific expertise, Dr. Arthur Cruddup-Boggs is a poor poster child for eugenics. With skin as pasty-white as it’s doughy, the blue-eyed former professor sports a triple chin, piggish nose, and bald pate framed by blonde-gray hair and half length mutton-chops. His wardrobe and accoutrements seem little changed since his death in 1972: short-sleeved dress shirts, ties (Rebs red of course), an open-carry revolver, high-water wool slacks, argyle socks with swastikas and odal runes, catfish loafers, and an old angular briefcase adorned with the tarnished logo of the long-defunct International Federation of Eugenics Organizations. Indeed, Dr. Cruddup’s sole postmortem addition seems to be an anachronistic if mint-condition Mercedes-Benz 130H, a gift from Franz-Dietlof Koenig who correctly predicted Arthur would appreciate driving a car whose exterior was designed by the Führer himself.

Arthur Cruddup was born in Slidell shortly after the turn of the last century, an era where eugenics was a burgeoning, respectable field. Attracted to eugenics’ pseudoscientific theories and socioethnic policies, Arthur entered his school’s science fair with an experiment testing a novel, cheap sterilization method on captured stray cats and dogs and a projected analysis of societal costs saved if the procedure was applied to deemed the intellectually disabled, schizophrenic, epileptic, blind, deaf, physically deformed, and other ‘deficits’. The senior’s exhibit won not only the school fair, but also the parish and finally state competition. In reward, Arthur earned a scholarship to Louisiana State University and a paid trip to the 1932 International Eugenics Conference in New York City.

The latter opportunity allowed him to rub shoulders with the likes of Ernst Rüdin (who later used eugenics to justify Nazi racial policies) and representatives from the foreign Kaiser Wilhelm Institute of Anthropology, Human Heredity, and Eugenics as well as the domestic Cold Spring Harbour Carnegie Institution for Experimental Evolution and Eugenics Record Office. These contacts proved pivotal as Arthur first completed his undergraduate education, then conducted graduate studies in eugenics at the Kaiser Wilhelm Institute (courtesy of a scholarship from the Rockefeller Foundation), and finally returned to Louisiana as professor of eugenics at Tulane conducting research funded by the Cold Spring Harbour Carnegie Institution for Experimental Evolution. His academic position and external funding allowed Arthur to teach, pilot test, and publicize various local eugenics policies and programs, including: genetic screening, birth control, promoting differential birth rates, marriage restrictions, segregation, compulsory sterilization, and forced abortions or forced pregnancies. It was eugenics’ halcyon era, and Arthur rode its coattails to academic and popular acclaim. Yet neither were to last.

After WWII and the discovery of the Nazis’ genocidal atrocities, eugenicists such as Dr. Cruddup instantly became pariahs. Funding dried up, and both institutional and public interest vanished. Protected by his tenure, Dr. Cruddup retained his professorial position, but he found himself stripped of lab space, assigned fewer and fewer classes, and shunned by most of his colleagues—especially as Arthur neither recanted nor relented in his unpopular positions and labors. If anything, his efforts and beliefs only became more extreme.

During the next two decades, Arthur sought out whatever politicians or agencies would still listen to him. For instance, he cultivated a vigorous long-distance relation with Sweden’s national eugenics program (which persisted until 1975). He became a popular speaker on the Klan circuit, and sponsored Tulane chapter’s of the White Youth Alliance. Both associations led him to become close to David Duke (who was then a student of Arthur’s alma mater), and in 1970, he helped the Nazi-costumed racist organize a protest against William Kunstler’s appearance at Tulane University. These activities, including Arthur’s antisemitic remarks against the famed Jewish civil rights lawyer, finally provided Tulane the leverage to get rid of the repugnant, if tenured, professor.

The loss of his job completely shocked and devastated the then 55-year-old man. His wife left her violently downward-spiraling husband (especially since the eugenicist was impotent). So distraught, the unemployed Arthur drunkenly considering carrying out several crude “extermination” attacks against the “backward” races, ethnicities, and ideologues whom he blamed for his country’s (and personal) problems. However, Arthur was “saved” from such surely suicidal fantasies by a lucrative job offer originating from his home town of Slidell.

Upon hearing of Arthur’s “expertise” and his distant relations to the Boggs, Cletus hired Arthur to conduct a comprehensive genealogy of the Boggs clan–a task suggested by his sire, as the Giovannini maintain precise records of their mortal and Cainite ancestry alike. Arthur, awed by the offered fortune and ecstatic to find a population who already accepted his pseudoscience as self-evident truth, quickly agreed to Cletus’ offer.

But the job, which initially seemed all too easy, quickly revealed itself in all its maddening, impossible monstrosity. The Boggs were… prolific. Their family trees were insanely crooked, twisted, and outright knotted in ways that defied reason, decency, and sometimes human biology. And the records… were worse than nonexistent. Arthur was forced to go door-to-door and conduct lengthy, tortuous interviews with members of the sprawling clan. During these ethnological expeditions, Arthur saw and heard things. Terrible things. He tried reporting them to the local police, but the police, who were nearly all Boggs, just laughed off the tales as “nuthin’ but lil’ bedtime stories” and then regaled him with even worse tales. Horrified, Arthur tried to flee Slidell and the parish, but the Boggs caught him every time, chiding him for trying to skip out early on his contract.

After two years of hell amongst the Boggs and nowhere near close to completing his Sisyphean task, Arthur killed himself.

But death rarely interrupts Clan Giovannini’s labors. Cletus revived Arthur with his vitae, ghouling the reluctant genealogist. The revived and soon blood bound Dr. Cruddup resumed his genealogical research, and 44 years later, his labors persist with little end in sight as the Boggs continue to rut and breed like a malignant cancer. Apart from his primary task, Dr. Cruddup is irregularly charged with conducting eugenic case studies and quasi-experiments and presenting his results to local Klan meetings and regressive politicians and back-room businessmen. Naturally, these ancillary duties delay his paramount ancestral work. But Paw Boggs is patient. After all, they have eternity. 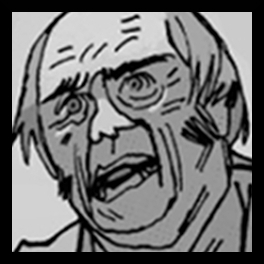