Rocco: “I saw Arzilla the other night when I went to visit Sundown. Are Andy and her still a thing?”
Coco: “I think that was just a rumor, Rocco. Blown out of proportion from the hazing they put him through. No one wants to be intimate with a sewer rat.”
Rocco: “Thank you for easing a poor sire’s mind. I hope they’re only rumors.”
Rocco Agnello to Coco Duquette
“I can’t judge Andy too harshly, though. I think my expectations were simply too high when I Embraced him. He’s certainly doing better than Dahlia-Fleur.”
Rocco Agnello
“El-Oh-El. Fuckin’ noob.”
Andrew Philips

Andrew Philips is an overweight man—though most people would first describe him as a boy—of below average height and well above average girth. In public, he invariably wears a dark sweatshirt with its hoodie drawn all the way up to hide his face. Exceptionally deformed for a Gangrel, he looks more rat than human and rivals any Nosferatu for hideousness.

He smells as appealing as he looks.

Andy Philips was nothing special, though he always thought he was. Born to a middle-class family, he was bright enough for teachers to praise but not hard-working enough to make anything of himself. He wanted to be a computer programmer, but lacked the patience to learn how to code. Playing video games was easier. Gaming was easier than getting good grades, too, just like eating poorly was easier than exercising and eating well. Regurgitating conspiracy theories was also easier than studying issues. Watching porn was easier than talking to girls. Whatever life put in his path, Andy Philips took the easy way out.

By the time he was 20, Andy was a slovenly, overweight, socially maladjusted young man at Delgado Community College with poor grades, no major, mounting student debt, and only the vaguest of plans for what he wanted to do with his life. Even the private tutor his parents hired to teach him coding thought he was hopeless: Andy seemed more interested in hacking the webcams of girls he found attractive than learning Python, and more interested in wheedling his tutor to hack their cams than doing so himself.

Andy knew just enough about computers, though, to fool someone who knew even less than he did.

After Hurricane Katrina, Prince Vidal granted Rocco Agnello permission to Embrace a new childe. Everyone said technology was transforming the world and Rocco wanted to get in on the action. Andrew Philips seemed like the perfect choice of childe: he spent all of his time on computers, seemed knowledgeable about them when Rocco (who could barely move a mouse) talked to him, and had no apparent attachments to any friends or family. In traditional Sanctified custom, Rocco offered his would-be progeny the choice of death or the Embrace.

Once again, Andy took the easy way out.

The truth of Andy’s “skills” soon become apparent, and with it, his usefulness to Rocco. Andy’s present Requiem is now much the same as his mortal life. He spends most of his time playing video games, watching pornography, trolling people online, and circulating conspiracy theories, all without having to worry about grades and money anymore (his two ghouls take care of the latter). He’s fallen in with the Nosferatu despite his lack of tech skills and belongs to a krewe of Anarchs, the Twenty-Twenties, with two sewer rat members he’s grown close to. Some of the more lurid rumors floating around Elysium claim he’s taken one of them, Arzilla Bouon, as his lover. He remains on amicable enough terms with Rocco, but his sire is still disappointed that Andy is in no way, shape, or form the technological mastermind he originally believed.

Andy, for his part, is used to disappointing expectations.

In the aftermath of the 2016 Battle of Mt. Carmel and the final death of his sire, Andy abandoned what allegiance he’d had to the prince in favor of the Anarchs. Whether that was any great loss to the Sanctified is debatable. Andy’s contributions to the Battle of Mid-City were minimal at best, and most of his fellow Anarchs consider him a coward. Andy is far happier to trash-talk the Hardliners online or through the Cacophony than he is to get his hands dirty in the streets. He seems happy enough to have Miss Opal in charge of Mid-City and largely indifferent as to her alliance with the Baron. He just wants to troll people with his krewe and avoid any notice from the powers-that-be.

Andy holds territory in Mid-City with the rest of the Twenty-Twenties. He’s not bothered to establish any personal territory outside of that shared by his krewe.

Devon Pierce
Ghouled: 2011
Status: Ghouls •
Rocco’s younger childe is too ugly to seduce victims and lacks sufficient upper body strength to take them by force (at least without expending precious blood). That left taking them unwittingly. While his Nosferatu krewemates Gerald and Arzilla were freely willing to teach him obfuscate, Andrew still complained to his sire that feeding was hard unless the victim was already sleeping. Breaking into homes, however, was also hard: it was noisy and forced the now-eternally out of shape neonate to expend precious blood. After enough wheedling, Rocco turned to Donovan, who turned over a youth arrested by the NOPD who’d been busted on multiple counts of breaking and entering. That was all Andrew needed.
In exchange for immortality, Devon Pierce spends his nights covertly breaking into homes so that his domitor (who shows little interest in learning how to do so himself) may feed upon the sleeping occupants with less chance of disturbance. Devon considers it a good deal. He gets to live forever, and the tricks he’s learned (his domitor has passed on obfuscate to him) make robbing homes easier than ever. The mob fences associated with his domitor’s sire ask even fewer questions than his old ones. Devon is greedy for a plusher lifestyle, however (Andrew has neither the funds nor the inclination to financially support him), and Rocco has cautioned his childe more than once that a pattern of robbed homes linked to locations where he’s fed may eventually attract the wrong kind of scrutiny. Andrew has halfheartedly told Devon to “take less stuff” a few times, but doesn’t have it in him to discipline the ghoul more seriously.

Andy has no mortal pawns of note. Sometimes he collaborates with his krewemates to harass and blackmail a particular mortal they think deserves it.

Andy is a member of the Twenty-Twenties, a krewe of hacktivist Anarchs who get their rocks off by trolling people—Kindred and kine. Although Andy isn’t particularly brave, and lacks the technical knowledge to actually perform all but the most rudimentary computer hacks, he’s found a place among them largely through his extraordinary ugliness (which endears his Nosferatu krewemates), his purported romance with Arzilla Boudon, and his malicious sense of humor. (Twenty-Twenties Status ••)

Andy’s well-liked by the Nosferatu. He’s as ugly as any of them, shares many of the clan’s interests (even if he lacks their expertise), and is perhaps the only non-sewer rat in all of New Orleans who’s (allegedly) willingly been intimate with one of them. The Nosferatu truly believe he doesn’t judge them for their looks. That counts for a lot. (Nosferatu Status ••)

Largely by dint of his association with the Twenty-Twenties, Andy’s an established name among the Anarchs. It’s widely suspected that his krewe pushed him into participating in the 2016 Battle of Mid-City to the limited extent that he did, but it can’t be said that he completely shirks he cause. (Anarch Status •)

Andy’s standing among the Camarilla is negligible. His sire’s and grandsire’s names count for something, but Andy himself is viewed as a repulsive, lazy, cowardly, and poor-mannered creature who’ll never live up to their reputations. (Camarilla Status 0)

The Gangrel regard Andy as a coward and near-waste of the Blood. He rarely attends the clan’s gathers, where he’s scared that some of his more violent clanmates might hurt him. (Gangrel Status 0)

Andrew is childe of to Rocco Agnello, a respected hound under Sheriff Donovan. He met final death in the 2016 Battle of Mt. Carmel. Rocco was the childe of Caitlin Meadows, New Orleans’ former scourge and one of the most feared vampires in the city. In recent months she appears to have gone rogue. Meadows has never spoken of her sire. Gangrel are notoriously poor at tracking their lineages due to the clan’s habit of abandoning recently-Embraced childer, and Meadows herself may well be ignorant who granted her the Embrace.

Andrew’s elder broodmate Dahlia-Fleur Guidry was an unfaithful pastor’s wife Embraced by Rocco against her will. She responded by joining the Circle of the Crone and is an equally great disappointment to their sire in her own way.

Andrew’s younger broodmate Guilo Matranga, was a Mafia capo, ghoul, and postmortem Embrace who arose as Kindred following his death in the 2016 Battle of Mt. Carmel. He was slain the same night in the subsequent Battle of the Arts District. 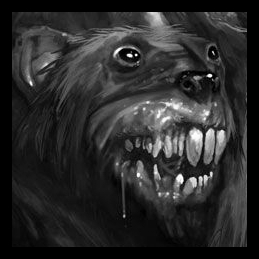