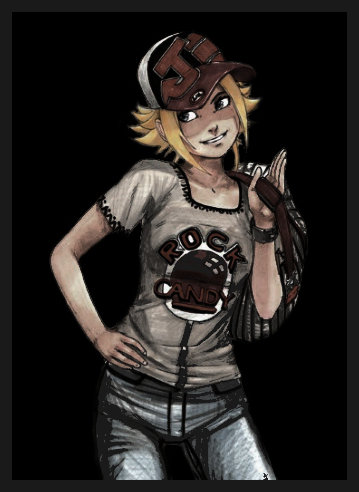 Standing at 5’5", with a petite frame, blonde hair, bright blue eyes, and a cheerful demeanor Alice is the perfect image of a sugar-sweet young woman… until she speaks. Any doll-like impressions her initial appearance might give are quickly dispelled by her frequent use of expletives, flippant attitude, and tomboyish personality. Despite all of that, she is usually cheerful, and friendly even to strangers. Though quick to anger, her temper usually fades as swiftly as it rises. Overall, she gives an impression of explosive energy, barely contained in a small cutesy body.

She often has smudges of dried paint on her hands and arms, and is seldom seen without her lucky baseball cap. She dresses casually, in t-shirts and jeans, shorts, or short dresses. Her idea of fancy dress is an ironed blouse and slacks. She rarely wears jewelry. Alice is never far from her courier bag of art and school supplies, which she uses the way other women use their purse.

Alice Matilda Krieger was born to Michelle and Victor Krieger in Houston on Halloween night, 1993. Was the date of her birth some portent of the strange and unearthly events that would mark her later in life? No one can be sure. In any event, on the night when all of mankind celebrates the supernatural, and monsters parade openly in the streets, she was brought into this world.

Her young life was peaceful, and idyllic. Her parents each came from long-established families, truly loved each-other, were well-educated, and financially well-off. They were even wealthy enough to afford a small house and shed in one of the less urbanized sections of the city. It was not until the sixth summer of her life that things began to change. Her father left for an extended business trip to South America to arrange an important business deal with one of his company’s clients. When he returned, something was different. He no longer smiled or made jokes. He got rid of the family dog, saying she was “too aggressive”. Indeed their pet sheep-dog Moxie had grown restless and agitated since the business trip, going so far as to bite Alice’s father when he went to feed her. He was distant to his wife and daughter. He began spending more and more time going out for “midnight walks,” or tinkering in his “Man Space” in the backyard shed. Concerned about her father, and afraid that the ever more frequent fights between her parents would worsen, Alice stole out of the house one night to see what it was her father was doing on his late-night excursions.

Stealthily following her father through the dark, the two made their way to a bar in one of the less reputable apartment-lined neighborhoods nearby. She watched as her daddy spoke to one of the half-dressed ladies standing under a nearby light-post. He gave the lady some money and the two started making their way back toward the house. Confused, but with a growing feeling that something very bad was about to happen, Alice followed. The lady and her father walked around the house and into the shed. Dragging one of the plastic lawn chairs over to the side, she peered into the window. She watched in horror as the Thing that was not her Daddy finished slithering out of the now loose Daddy-shaped skin suit it had been wearing. The half-dressed lady opened her mouth to scream, but the Thing was too fast, tearing into her flesh with wriggling fang-lined tentacles. Alice does not know whether it was fear or anger that boiled up in her mind at that point. Only that every fiber of her being rebelled against the thing that had taken the place of her Daddy. First, the interior of the shed got warm… then hot… and then the shed’s interior burst into flames! Shocked out of her trance, Alice fled into the house, and up to her room, leaving the Thing frantically batting at the small fire which threatened to spread to the rest of the shed if not extinguished. Alice spent the rest of that night hiding under the covers, dreading the thought of the days to come.

Her pyrokinetic powers were now awake, and she had no time to learn to control them. It did not take long for the Thing to realize that she knew its secret. The fires popping up whenever she felt threatened or excited gave it the perfect way to be rid of her. The Thing convinced her mother that Alice was a mentally troubled child, and that the fires were an act of juvenile Arson. It had her committed to the Houston Center for Troubled Youths, to undergo psychiatric care. Her incessant pleas that her father was actually some sort of terrifying monster in a skin suit that ate people did little to help her case.

She spent several years in the psychiatric institution’s care, often punished for smuggling in matches or other flammables. She was, of course, completely innocent. The fire was in her mind, not the result of some mundane arsonist’s tools. Eventually, she found a way to cope with her powers by painting. The calm, meditative state she entered when absorbing herself in making art served to temper and control her powers. Meanwhile, outside the institution, her mother, freshly divorced from the Thing which still pretended to be Victor, finished preparations to retake control of her life by returning to the city of her birth, New Orleans. Wanting a new life for her daughter, as much as for herself, she filed the paperwork to have her daughter released, had their legal names changed back to her maiden name, and together they made the move to Louisiana.

The fresh start gave Alice a new chance at life. One she was eager to take. She worked hard to socialize and be just another ‘normal’ kid. She tried to forget about the Thing. Unfortunately, her eyes had already been opened. Young as she was, she saw all too plainly the signs of the supernatural predators that stalk the streets of the Big Easy. Fearing the wild, destructive nature of her powers, and the potential for being locked up again, she began desperately searching for a more subtle means of protecting herself and her mother. She knew that the supernatural was real… so perhaps magic was real too. In fairy tales, the heroes sometimes used magic to fight off monsters, and Alice hoped desperately that she could use it too.

It’s been just over 11 years since then. Her powers are mostly under control, only surfacing in times of extreme anger. Over the years, she had cobbled together fragments of occult lore; a bit of vodoun here, some ceremonial runes there, and a dash of shamanism. Through trial, error, and the careful use of internet message boards, she had developed a narrow, but functional, form of magic. She has survived several encounters with the supernatural in her teenage years in the Big Easy. She is ready, or at least thinks she is ready, to begin her work in earnest. That is, if she can find the time between working at the bookshop, attending college, discouraging the attention of the neighborhood boodsuckers, and making a pseudonym for herself in the world of street-art.

It’s just another day in the vast, chaotic World of Darkness.

Player’s Note: These are some of the sources of inspiration for Alice’s character, story, and personality. They are all really cool, and well worth checking out! 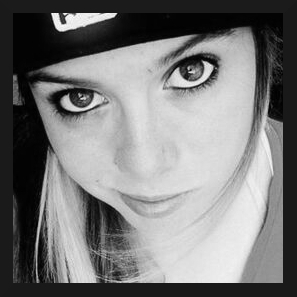